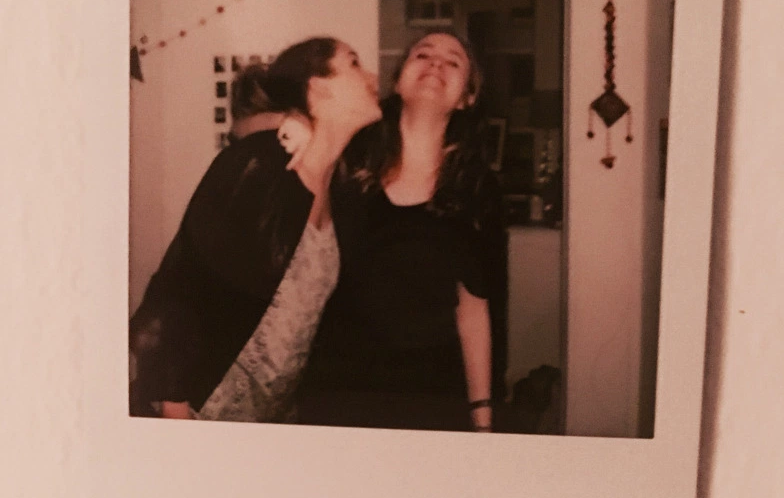 1. I am told to sit in-between her and her friend in our French class because they won’t stop talking to each other and I am still very shy and very quiet and the teacher thinks maybe I will help them focus. We immediately become friends. We end up being separated only three classes later.

2. He makes me laugh because he is as neurotic as I am and also can’t handle his alcohol. He’s in love with my roommate.

3. I am four years old and have very curly hair and she is born at the end of March and I can sense immediately that everything is about to change and that she will be getting more attention than me from now on. I still introduce her to my beanie babies.

4. I show up to a party in Bushwick and am immediately asked to take off my shoes before entering the apartment. I am wearing clean socks, but they are very obviously stained with a little bit of blood from the last time I wore them and I got blisters. I am wearing bloody socks and, strangely, nobody will talk to me at this party.

5. He and I have met maybe once or twice before in passing—but now he’s making me laugh so hard there are tears in my eyes and my cheeks hurt and I feel breathless and giddy and I can’t help but think, “I need to latch onto this person forever.”

6. She’s the first person I met who understood what I was talking about when I said I wanted to write. I knew immediately that she was a better writer than me.

7. We both declared our majors at the last possible second and are a year older than everyone else in our class. Our friendship begins when I ask her for a mint.

8. I make very confident snap judgments about people and am correct 9/10 times in my immediate assessment of whether I’ll like them or not. He was that 1/10.

9. I am closing the bar tab and he comes up to me and says that he thinks he’s seen me at this bar before. It’s impossible because I’m visiting this city for the first time ever in my life, but I pretend otherwise.

10. It is my first day and when I open the door she is making coffee in the office kitchen. I’ve read her writing. She hugs me. She later learns I do not like hugs and thinks it’s funny I let her do that.

11. In the smaller classes in college, we would always be asked to go around the room and give our names, our majors, and a fun fact. My fun fact was that I’ve seen every episode of The Office and could probably quote most of it. It’s a lie, I’ve never seen the finale.

12. We were 11 and I was new to the school and she told me she could probably fit more chips in her mouth than I could. I went to her wedding 11 years later.

13. I think I have the opposite of Resting Bitch Face because a lot of people have told me that I’m meaner than they initially thought I would be.

14. I am in a place I have never been before, in a city I am about to move to, and I’m so desperate to have basic human interaction. I make the slightest bit of eye contact with her and she hasn’t stopped talking to me ever since.

15. Every single one of my friends was in love with him and I never understood it. I’d only seen his Facebook. And then we met.

16. Everyone had warned me before meeting her that I would not like her. She’s a little cold, she’s a little weird. You have to get to know her. She was so wildly unimpressed with everything around her, I fell in love with her before I even introduced myself.

First Impressions Humans I Was Told To Start Writing More Is This Dramatic? People Too Dramatic?