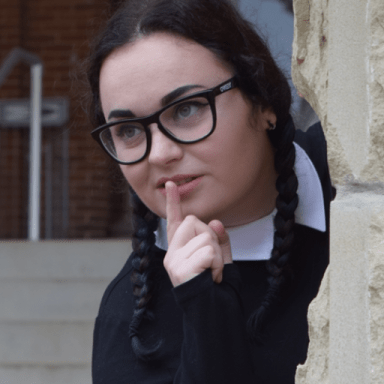 It happened faster than I think either of us could’ve ever seen. An evening at a college town forged the rest of our barely-platonic relationship, dooming us to an eternity of awkward conversations and similar disdain. Best friends turned lonely acquaintances in the span of a week. That’s all it took. A fateful night followed by a week of hard-pressed arguments and tears.

I’d like to believe that if September 23rd hadn’t happened, we’d still be friends. Closer than siblings who fought over petty things and made up an hour later over a mutual love of food. But it seemed the universe had other plans for us that didn’t include joint friendship. But if I knew one thing about our relationship, it was that we were doomed to fail. Too many differences, arguments, and fights that were salvaged by chips and salsa, and the occasional apology neither of us truly meant. I didn’t want it to end, especially not on the note that it did, but unfortunately that September night occurred and burned the thin line left between us, a lifeline neither of us could hold onto anymore.

Since the incident that changed our friendship forever, I have accomplished so much. My writing bug came back, and my love for reading sparked again. I found joy in random, silly things I didn’t realize I enjoyed. It wasn’t that those things were directly affected by said friendship, but during the three intense years we were close, I found myself drifting from the hobbies and passions I deemed important beforehand. I could never blame her because she never kept me from books and Microsoft Word. It was just that those passions were put on hold while we were friends. I found them irrelevant to my life. I didn’t stop writing or reading. I just stopped enjoying them. I gave a lot in that friendship, and it seemed that as soon as the last root was snipped from our friendship, all those things I let drift from me floated back into my arms. I cradle them fondly nowadays.

Some friendships aren’t meant to last, and it seemed ours was part of that list of ill-fated connections. I never wanted to give up and accept defeat, that we were too different and out of each other’s platonic leagues to click together the way a puzzle should. I gave so much for our friendship. Too much at times, but I hardly received. A person can only hand over so much of themselves without expecting something in return, and I hit that limit. The line I leaned dangerously over. Tiny pebbles snapped off the edge of that cliff, and I watched them fall into the ravine below, the water parted by pointed rocks that reached up toward me with their glistening spikes. And still, I handed over more than I could afford. A loose thread in a favorite sweater that kept pulling and pulling until all that remained was a clump of yarn on the floor.

I coped alone, whereas you were never abandoned in your time of need. I sat at your side and allowed your tears to wet my shirt. I never once told you no when I knew you needed me. You took up the majority of my life. I stood at the ready in case you called. I waited, wondering when I’d be needed again. But all the while I coped alone. Our friendship was at its hottest during the hardest year and a half of my life. I struggled to breathe amidst anxiety and PTSD, and instead of full-fledged support, I received half-hearted remarks that barely touched the surface. But I took them and held them close because they were what you gave. They were the socks an estranged Aunt gives to their niece they only see once a year. A friendly gesture wrapped up in a fancy bow to be opened during the holidays. I thanked you for those sweet words of encouragement and took them to heart, but they never truly meant what I wanted them to mean. The support you gave me was the socks. And while I take them out once a year and stick them on my feet, they’ll never quite keep me as warm as they could’ve if you’d stitched them a little bit tighter.

In all honesty, we were toxic for each other. We were the bleach and vinegar of friendships. Two young college women afraid of the world outside our quaint little college town, who were also afraid of each other. I acted better than, and I’ll admit that and apologize for it. Self-importance was—is—one of my sins in my friendships, and I’m sorry that it was one of the nails in our mutual coffin. I dealt with confidence issues when I was younger, and I know it’s hardly an excuse for narcissism. I got carried away with the newfound confidence that I found when I got to college, and that bled into our relationship. I’ll never forgive myself for what I said to you in the heat of many of our fights, but the words thrown back at me stung all the same. I’m sorry for anything I did. Anything I said. Anything I wanted to say but kept in my throat because I feared losing you for good. We were doomed from the start, a friendship meant to crumble at our feet, but we gave it the run of a lifetime.

I enjoy coffee more than the presence of people.