I joined Tinder after a friend who thinks my love life is sad and pathetic urged me to get involved, or “back in the game” or “rammed in the vagina”, or whatever other platitudes the overly-sexed aim at their tragically single friends after being told on a Saturday night, “I think I’m just going to stay home and watch Harry Potter and the Half Blood Prince again.” Horrible superficiality and having to stamp your rejects with a giant red “NOPE” aside, browsing through the many dudes of Tinder (Tinder is a Mary Poppins bag of never ending guy) has been something of a lesson in manthrapology. Most guys on Tinder seem to be easily categorized into one of several groups, which makes the element of “choice” generally seem like a trick (something a cheap whore does for money). There’s an inordinate number of dudes on Tinder that are Way Too Young For You, although from time to time you might find yourself contemplating “life as a cougar.” Engaged with an obvious metaphor lately? While snakes are the prevailing weird pet of choice, there are lots of dudes who seem to have eat, pray, loved themselves in South East Asia and wound up petting a tiger or a sloth, riding an elephant, or with a monkey perched on their head. Or in this case, wife. As if I’m even complaining.

6. Guys Who Are Being X-Treme 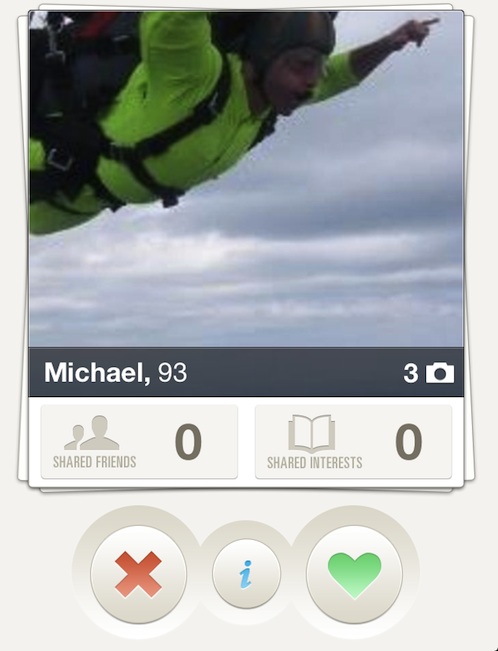 If you like extreme sports or at least men who are into them Tinder has a wealth of options for you.

7. Guys Who Are Having A Great Fuckin’ Time If Tinder is to be believed, there are a lot of dudes having A LOT of fun in a 100 miles radius of you.

8. Guys Who Are Very Proud Of Themselves For Having Caught An Exceptionally Large Fish I’m proud of you too, buddy!

9. Guys On Or Near Boats Being on a boat is generally a deal breaker for me, as I suffer from severe sea sickness. Being near a boat is OK though. If you’re going to cruise Tinder, just prepare yourself to be flashed by the odd naked, erect cock every so often.

12. Guys Who Know What Women Want Like this guy, who has made every woman in a 100 mile radius of him go “Awwwww!” There’s also a shit-ton of guys reading books, presenting flowers and playing with babies. If bottle service, flippy hair and an inability to do up the top three buttons on a shirt impress you, Tinder is chock-full of broody-eyed Chuck Bass types.

14. Guys Who Are Bradley Cooper 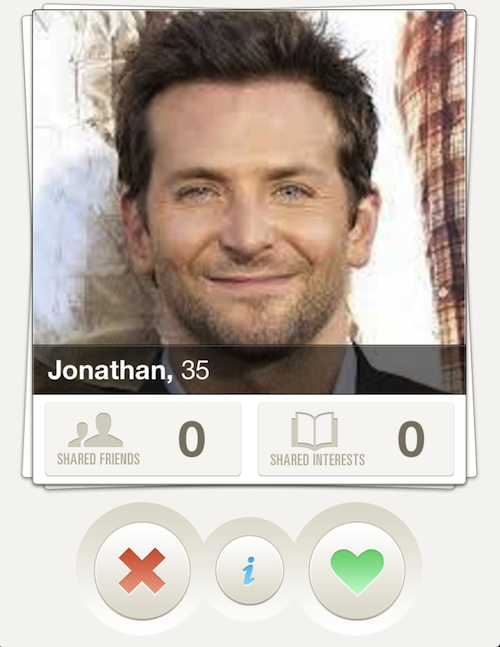 There’s a fine line between a poorly executed ruse to trick women into going out with you and a pretty funny joke, even if half the guys on Tinder are in on it.