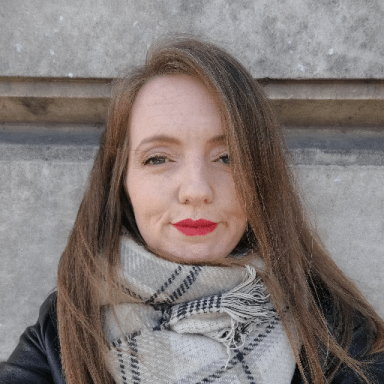 It started out as a regular meditation. I can’t remember where I was—probably lying on the sofa. I have tried sitting meditations and they’re okay, but I prefer to lie down. It’s probably the Leo in me. I don’t know, I get so involved in the focus that I feel like it’s too much effort to hold myself up. So, I lay down.

I’m not exactly sure where it started or when. All of a sudden, I sat cross legged and suspended several hundred feet above what looked like a red desert. It wasn’t the first time I’d had one of these suspended in mid-air sensations. During a particularly intense time, I had a similar vision, but I was suspended over a wooded area not far away from my house in Nottingham.

The second time it happened, I noticed how I could have some control over where I was, where I was going, and at what speed. On this occasion, I made sure I had a really good look at where I was and what was around me. I kind of recognized it. It was very pink-red and thoroughly engaging. My heart was racing and opening, stretching. Interesting, weird, and exciting.

I wondered where it was as I came out of the meditation. No sooner had the question come into my head, the answer “Monument Valley” came straight to mind. I’d vaguely heard of it, but couldn’t bring it to mind. A quick google search confirmed it. Utah—wow. The more I googled it, the more I loved it. I’d been briefly through a part of Utah, but I had no idea of the extent of its beauty.

This was a strange turn of events. It’s no secret I have a complete fascination with water and ocean. What the heck was this about? Now I’m in love with the desert? For about the next two weeks of meditations, I found myself back in what appeared to be different parts of the western north American desert.

I became completely enraptured by the desert and everything to do with it. Normally, I would say I’m almost slightly agoraphobic, but on the contrary, the vast sweeping, endless flatness was like some sort of drug. How strange. Endless Pinterest searches later and I’d collected many pictures of American deserts, countless of which are out of van doors (“van life” is a thing, you know?). Two months later, during a quiet Sunday viewing of Erin Brockovich, the mere glimpse of the Mojave Desert made me practically giddy.

There’s no doubt I have an aspect of the hippie soul. In my early 20s, I had a massive collection of big gypsy skirts and rarely left the house without at least three sets of beads on. I am obsessed with nature, peace, fairness, and equanimity. But something different was happening during this time. I have always had a tendency towards eccentric dressing and being generally unconventional. But this obsession, there was more to it. It was deeper, a soul shuffle of some sort.

It started with going from wearing very little makeup to none and wanting to get rid of everything I owned and starting to feel a real affinity to chanting. With a growing pull to wear my balloon pants 24/7, I was wondering if I was actually turning into Frankie Bergstein.

Like I’d said before, during this rather peculiar time, I had been collecting pictures of deserts (and travel in deserts) on Pinterest. Whilst ensconced, I had gotten sidetracked with collecting images of people in vans in various deserts around America. Now, I was spending at least an hour a day daydreaming about being in a van in the middle of the desert. It was like some sort of odd fantasy that took on a life of its own.

And so the pendulum swings…

Annoyingly, I can’t remember who I heard talking about the “middle way” and how it might very well hold the key to my situation. Needless to say, it was very helpful. Stay with me here. Maybe you will relate. I’m telling you, this information has been seriously helpful to me and is now informing a lot of my travel and life plans. Maybe it will help you too.

The middle way is essentially a path of moderation found in Buddhism. It is the midpoint between sensual indulgence and self-mortification. Whoever it was I heard talking about it wasn’t just explaining the middle way in the traditional sense. They were explaining how, when we experience one extreme, it is our nature to want to reestablish the balance by pulling to the other extreme. Hence the pendulum swing.

And so the pendulum swings…

I want to become a van-dwelling, dirty, nomadic lone wolf because, well, the pendulum would say it was to rebalance the opposite extreme.

So this explains my problem: I feel too static, conventional, trapped, clean, and put together. I’m caught up in the wheel of regular life with no space to feel or intuit.

Okay, so this resonated hugely. Sure, I mean, who wouldn’t want to drive across the various beautiful deserts of America? Seriously, look, they are stunning. But my obsession felt like something else. It was a thirst that I had to quench and had become insatiable. I may be a bit out there, but I’m fairly sure I’m reasonably sane, ergo there had to be some sort of logical explanation to my sudden obsession. Enter the eightfold path and the middle way.

I cannot deny I had gotten a little stuck. Money was okay, but I’d had several big bills for this and that, and so, with winter and Christmas descending, I had decided to spend the next couple of months largely at home. I am based in the center of the UK, and in order to get anywhere warm, I need to go quite a long way during winter.

I’ve got nothing against cold places. I can’t wait to go to Norway and Alaska, but generally I want to go somewhere warm and bright. Apparently, this is something to do with me having Capricorn in the 6th house—I have a weakness for temperature changes and dislike being cold. Sounds about right. This means travel costs a lot during the winter. It also, rather beautifully, makes me entirely suited to desert dwelling.

However, before I sell everything I own to run away and live in Arizona in a hut or something, I need to consider the pendulum. If I am right and it is the reaction to the pendulum swing, going the opposite way will only suffice for so long. After a few weeks or months of Bear Grylls type habitation, I would crave city or people or a pair of tight pants, you know? There’s really something that deeply resonates with this. It’s interesting to wonder how often I have done this in my life—you know, sent the pendulum one way, rushed to counteract, and then back the other way. Back and forth, back and forth.

So instead, what now? I guess that craving, that nudge, that deep need for something is just that—a need. It’s not something to be ignored. However, perhaps it requires some consideration before action. In this case, I wonder, How can I redress the balance without making myself another problem to deal with two months down the isolated and dusty desert road?

Personally, I think there’s more to this desert thing than just a desire to be away from the British rat race, but that’s a discussion for another time. Although I believe I need to spend some time in the desert, my soul needs to hear something here; for now, I’m looking for balance. And so the experiment with the middle way starts. “Okay,” I thought to myself, “I’m spending too much time around people. I need to make more time for contemplating, personal silence and music. I need to be more creative and spend more time writing.”

Instead of rushing off to the desert, I imposed silent afternoons. I literally closed myself off and didn’t speak for hours on end. I made a slideshow of pictures on my android tablet to keep me focused on my long-term living and travel goals and propped it up at the back of my desk so I could see it all day. I zeroed in on writing and spent as many hours a day as I could doing it. I listened to music that inspired me more than normal. They weren’t radical changes at all. Proper change only ever comes as a series of small steps, contrary to our mind’s insistence on a Hollywood style ‘big bang’.

Now, I’m going to ask you to try the experiment for yourself. When you next feel an urge to be extreme, consider whether it’s maybe a call to the middle way. Maybe you have veered too far from a moderate path. So, instead of sending yourself off in the other extreme direction, consider just imposing a balancing adjustment to your regime or life. Did it work? I found it absolutely did. It worked incredibly. The thirst was quenched, and I was nowhere even near a desert.

Peanut butter and syrup is my favourite toast topping

It’s Okay If You Don’t

Why I Don’t Meditate

How Meditation Helped Me To Overcome My Battle With Addiction

… About My Eating Disorder

God’s Plan For You Is Perfect

10 Life-Changing Things I Learned After 100 Days Of Meditation