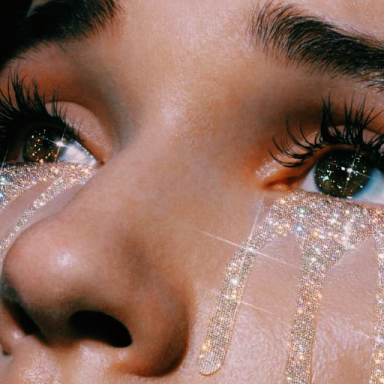 My first love was something to behold. It was a Greek tragedy right from the beginning. We were not meant to be. We had different values, different family structures, and finally, different hopes and dreams. One of the few things we did share was our love for one another, and whatever fragile tether or red thread was that brought us and kept us together for that short amount of time. Being with him was everything and nothing at the same time. It was everything because I felt alive when I was by his side—I felt hope, vulnerability, love, empathy, disbelief, pain, and adoration. And it is nothing because that is what is left of us.

If you’re lucky, I believe you get to fall in and out of love with someone. To experience their absence from the comfort of their arms. To have the time to come to terms with the end of your relationship. If you’re really fortunate, you might even get to end things on good terms. To have that last memory of them be a smile, a tight squeeze, a lovely goodbye. Other times, it’s not a choice—the time runs out of the clock without notice. The rug is pulled from under you both in a matter of hours. There is no last goodbye, kiss, embrace, or even smile. There’s just a couple of exchanges that knock the living breath out of you.

In the next couple of days, you’ll experience emotional shock. You’ll be cool. You’ll be confused. There will be a numbness that washes over you, making you feel safe from your feelings and hollow inside. This part doesn’t last—it goes as quickly as it came. Then you’ll be all over the place, bouncing off the walls, followed by 20 minutes of standing still, staring at the empty side of your bed. Then you’ll feel okay. You’ll begin adjusting to new patterns and routine. You’ll be sitting in your intro to stats class where, of course, you’ll be zoned out for the majority session until your professor (in the midst of a Dead Poet’s Society-inspired speech) will raise his voice a single decibel too loud, breaking your bubble just in time for him to say, “Learning is more often about being confused than knowing what is going on.”

And the floodgates will swing open once more.

You’ll revisit old happy places in your head and in your life. For me, it was an ice rink. Slowly, and then all at once, you will miss him. You’ll try to hate him, but that’s not really you. So you’ll try to settle for indifference, but that’s not how emotions work. You’ll do anything to escape your feelings. They are finally here, and they are here to stay. You’ll have lots of meaningless small talk with strangers trying to get in your pants, you’ll have all the alcohol possible to try and turn it all off for just one night, and if you’re lonely enough, you might even find yourself underneath someone else trying not to cry.

Weeks will go where you have no contact. You’ll be blissfully unaware of his existence—that is until your friends start with the updates. They saw him playing soccer on the field near your old junior high, they saw him at the mall with some other girl, they swear they saw him at your part-time job. But you know it doesn’t matter, it doesn’t make a difference, it doesn’t fix what is broken, it doesn’t change the last bitter texts exchanged. All it does is remind you that he’s still breathing like you are. Eventually, he will reach out. He always does, and you’ll have a choice to make: Either reply and be tricked into giving him a 12th chance, or leave him on “read” and keep moving forward.

You’ll pick the latter, then feel him cutting all ties as he unfollows you on Instagram and unfriends you on Facebook. It will feel more or less the same. Slowly and painfully, the realization that he is genuinely gone will sink in. Then everything will hurt. What you hear, taste, and smell will all hurt. Lost Kings playing in the background? Turn it off. Red Starbursts? Stop. Axe body spray, anyone? Get it away from me. The worst part of the grieving process will be realizing that you are much gone from him as he is from you. Your emotions eventually catch up to you, and you’ll cry like someone died.

But it is like someone died, isn’t it? Did you have a chance to prepare yourself for this massive hole in your life?

Did you ask him the questions that were eating you up inside?

I didn’t think so.

Did you get to hold him and kiss him, fully aware that it was the last time?

As if you could be that lucky.

He’s no longer part of your world. He’s not there to make you snort while you laugh or even make you wanna rip your hair out. There’s a great chance you haven’t felt like doing either since the week you last saw each other. He’s gone and he’s done.

You’ll realize that sooner or later you’ll have to accept the apology you never got. That happiness is a choice, and freedom is a state of mind. Yes, this will suck. Time won’t heal these wounds, the only person who can make it better has been gone for months now. However, time will give new things to be excited about. To obsess and cry over. Time will push you to begin again. Eventually, you’ll stop wondering why he couldn’t give you happily ever after and start appreciating all the small and big moments (however brief they were) you spent together.

You’ll realize that small talk, alcohol, and sex are infinitely better when you are happy and in love.

You’ll start appreciating the fact that even though you made a mistake, your love story wasn’t some tiny sad violin—it was the entire damn orchestra. Now you don’t have to wonder what if, because you know precisely what if. You might even come to understand the phrase “If you’re gonna do something wrong, you might as well do it right.” Moreover, in the words of perhaps, the most self-actualized and melodramatic heroine who ever graced us with her words, “I’m waiting for it. That green light. I want it.”

You’ll finally come to terms with the fact that you once loved a two-legged rat. You wanted the sun, and he was satisfied with a measly flicker. You have the world at your fingertips while he is drowning just trying to stay afloat. There was a reason why you couldn’t find it in yourself to bend over backwards for him. To rewrite your narrative to fit his story. Because not everything is meant to be. Because he barreled in and waltzed out of your life for a reason. You never saw him coming, and now you’ll never be the same. Good. You’ll never make excuses for anyone ever again.

Because you now know that not getting what you want is more often than not a wonderful stroke of luck.

But here’s the thing: if you’re reading this, you were most likely 92% of the magic in your relationship. Yeah, you might have been the one he pushed off a cliff. But on that note, you are also the one that got away. You were the airport. You were the summer nights spent beneath the stars and the warm afternoon car rides. You were the selfless favors performed at once. You are the boom boom pow. You will be the only taste of unconditional love he will ever get, and sooner or later he’ll be searching for you in everyone he meets. However, if you could be these things for him, you can be them again for the right person. Nothing is ever ours to keep, but shitty things have ended to make way for the new chapter of your life.