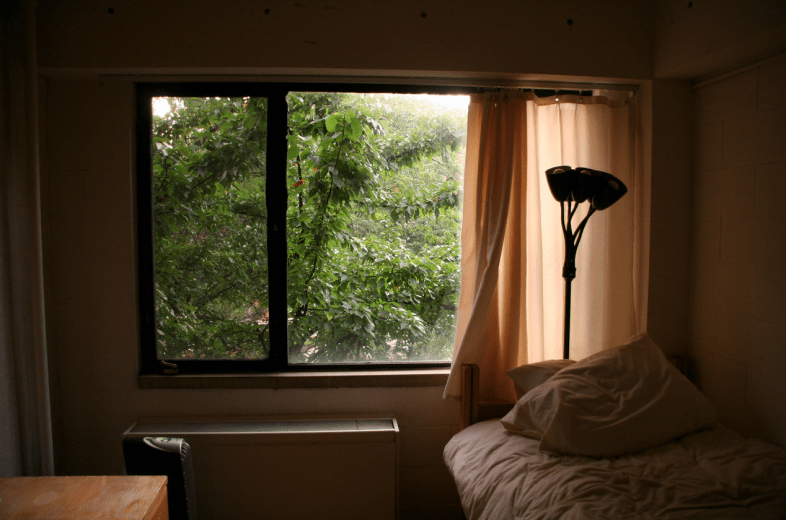 I think I have ghosts in my house.

I’ve written about it flippantly before, pretending that the creaks and squeals of my radiators were ghosts having a party while I slept. Since I’m home during the day, they must not dare to come out. My ghosts were a running joke with my friends and the boys who slept over. Shhh, I’d say. If you listen really closely at night, sometimes you can hear a music box sound amidst the clanking.

I wasn’t ever afraid, though. Ghosts aren’t real, I said to myself like a parent to a child. While I’d long been obsessed with the paranormal, I never thought it had anything to do with me. And if I did have some spectral presence in my apartment, then I hoped they enjoyed the little world of shabby beautiful things I’d created for them.

After a long weekend in Texas, I woke up, brushed my teeth and plunked down at my desk in the bright May morning light. There at my feet were scratches I’d never seen before. I watch my pretty, well-tended hardwood floors like a hawk; I had to quit doing Pilates in my living room because I spent more time examining the floors than working my core.

The new scratches said my name. I paused for a moment. I hadn’t had a party in months. I hadn’t really had guests in weeks. This was new, and I had no explanation for it. No one did. But it was there, only visible in direct sunlight when the glare was just right.

There were other scratches I’d noticed and brushed off before: two deep ones in front of my bookshelf, where no one ever walked, moved or stood. Another near my kitchen, thin and white. One day I’d come home to find my couch moved away from the wall. My polite and respectful landlords never enter without 24 hours notice, and I am not prone to rearranging my furniture.

I Googled my address and found no historic event that might have given the ghosts a reason to stay here. If there was a ghost, it was quiet. I still wasn’t afraid. It was welcome to stay if it quit hurting my floors. I’d read that a ghost can simply be the remaining energy of a relationship you haven’t yet made peace with, and god knows I had more than a few of those.

But minor disturbances mean they’re trying to tell you something, said a friend’s mother. A gas leak, maybe. But the fire department had come through on routine maintenance and found nothing anyway.

“I see ghosts and I was terrified the night I stayed in your house,” said my friend Brittani, a slip of a girl with an otherworldly quality of her own. “I slept with the lights on. Ask them to leave.”

Two days later, there were blue spots – dark ones – in my old porcelain bathtub. When I swiped at them with a sponge, they turned orange and slowly disappeared.

Maybe it was nothing. Or maybe it was something really big. I’ve always believed in signs, although when I was younger it was hard for me to decide if I was just reaching really hard for what I wanted and making that a sign in itself, making them up out of thin air to make me feel better.

The ghosts were a mother and children. Or maybe it was a man. Those I knew with the ability to tune into the spirit world weren’t quite sure of who they were or when they lived – at least not yet. It’s hard to get a clear reading from thousands of miles away. But they didn’t want to hurt me. They just wanted my attention. But what was I missing? I spend most of my hours in these few rooms. I knew their rhythms and their motion perfectly.

I said I wasn’t going to let him in. I knew, of course, that I was just lying to myself, but I vowed it just the same. He kissed me in my dining room, up against the wall, and flooded that old familiar gold down my throat. I let him undo my dress. I kicked it towards the door. I let him into my bed. It wasn’t the one he was used to, but then I wasn’t really the girl he was used to, either. I knew it wasn’t my finest moment, my biggest and best idea, but I did not want to sleep alone with my ghosts that night.

Maybe this is what my ghosts are trying to tell me.