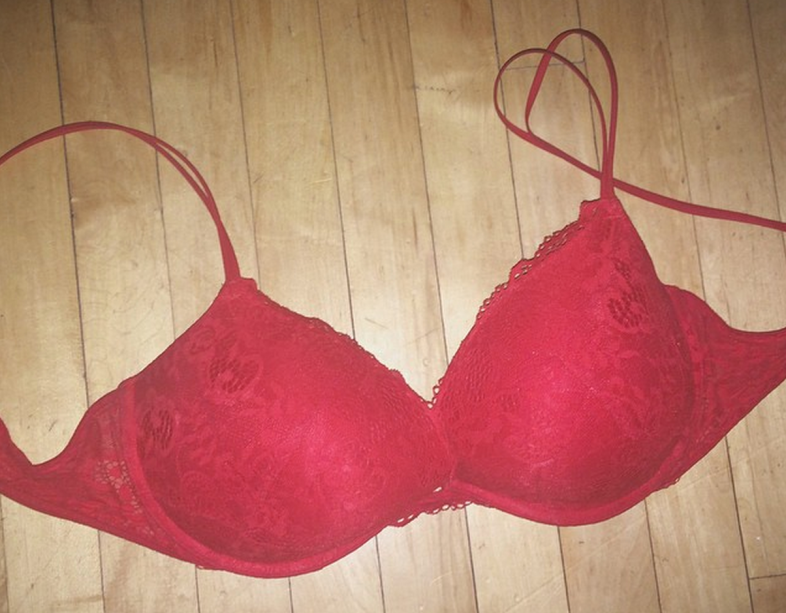 I wanted a bra SO. BAD. I was eleven, and I definitely didn’t need one, but I wanted one anyway. A bra would make me a young woman. A bra would give me entry into the world of “YM” and “Seventeen” and even that issue of “Cosmo” we snuck peeks at in the library. Getting a bra meant that soon you’d get your period, and we were all just waiting for that fateful, semi-terrifying day. Two of my best friends were already wearing bras, and Ali’s mom bought her one, too. I needed a bra. I deserved a bra.

As a child, I was always yearning for the next big thing. I pulled a tooth when it wasn’t loose just so I could be like my kindergarten classmates. I wanted glasses and braces because my babysitters looked so cool in theirs. I eventually got my period – the last of all my friends – but I lost my virginity first. When you grow up in a tiny town, you’ve got nothing else to do but try to grow up fast.

So I stood outside our house on the deck and gathered up my courage. I called my mom at work, the big cordless phone hot against my ear, and I told her I wanted a bra. A “skin-colored” bra, to be exact. “Do you think you need a bra?” she asked. “I just want one, OK?”

Mom came home that night with not one but two beigey training bras. I was thrilled. I couldn’t wait to wear my new bra to school, but when I did, the meanest girl in class pointed out that she could see it through my white shirt. I made a point not to wear white for the rest of the school year. I abandoned the bra during the summer for a more comfortable uniform of a bikini with generous straps and boyshorts.

At 13, my best friend Ali and I wanted boobs like our friends but we just didn’t have them. We assumed we were AA cups for good, never to swell out a baby tee. So we took to wearing magenta Wonderbras with a watery gel insert that we thought looked authentic as hell. The next day at school, we compared boobs in the mirror and were pleased at the results. So were our male peers, whose eyes strayed to our chests whenever possible. Oh, junior high.

I got my first “sexy” bra at 17. I bought it in secret behind my mom’s back at a Minneapolis TJ Maxx and whispered to my high school boyfriend over the phone that I was coming back with something just for him. It was pale pink with black ribbon and I bought the matching thong, too, eager to be lingerie’d up. I still gravitate towards that color scheme. It felt absolutely delicious under my jeans and sweater the first time I wore it. He could probably feel my heart thumping with the secret of my lingerie when he peeled off my shirt later, in the back of a pickup truck.

When you’re a teenager, your idea of sexy lingerie is what you see on TV and in magazines: black lace, paired with stockings and garters, or the patterned pastels of Victoria’s Secret. You fumble around at Victoria’s Secret or Frederick’s and buy a garter belt and thigh highs to wear for your boyfriend and find it impossible to finagle, stuffing it in the back of the drawer. You don’t figure out what’s sexy to you until later, when you’re more concerned about yourself than a male gaze.

Thirteen years after I faked boobs with the help of Wonderbra, I was blessed with D-cup boobs seemingly overnight. I gave away all of my B-cup bras to eager friends, and honestly, it felt great to get rid of some of them, as tied to different boyfriends as they were. One boyfriend loved a red leopard push-up, and good riddance to both him and that bra!

I visited a legitimate lingerie store to buy bras that actually fit, which was a life-changing experience I’ll forever recommend. My first real, well-fitting bra, a Chantelle t-shirt bra that I paid $90 for, treated me so well for an entire year that it breaks my heart to replace it. Boxes from Journelle were constantly delivered to my house, because if I was going to revamp my lingerie drawer, I was going to do it beautifully, with matching Elle MacPherson sets. Except now that my boobs were bigger, bras felt oppressive. I never wanted to wear one. I started buying soft lacy bralettes from Free People instead of submitting to the tyranny of an underwire.

Working from home means I can roll out of bed and throw on a sweatshirt and live my life blissfully braless now, which makes it a treat to wear my prettiest lingerie when I go out for the night. I can’t resist beautiful underthings, even though I know they’ll get worn only once or twice a month, or live only in sexy photos sent to my dude du jour. I have lacy ones, bullet bra styles, blue and red and black and pale pink. It’s like a party in a drawer, really. Because no matter how big a pain in the ass bras can be, there’s still something so thrilling about knowing there’s something all lacy and fancy hiding under your clothes, isn’t there? I mean, as long as it fits properly.

Growing Up In The Pediatric Ward

A Story About A Good Set Of Breasts

11 People Share Their Weirdest, Most Awkward ‘Sex With Ex’ Stories