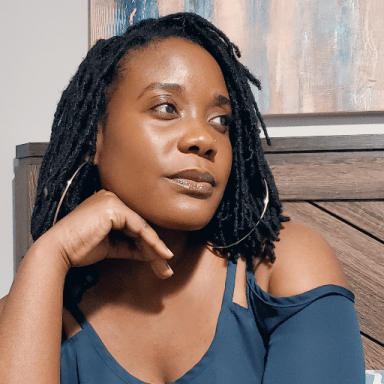 By Kara Lindsay Updated May 3, 2021
Photo by Rhand McCoy on Unsplash

By Kara Lindsay Updated May 3, 2021
Photo by Rhand McCoy on Unsplash

She said it ended –

It was one of a kind. Surely, it was extraordinarily different.

It was two-sided, sometimes three, but mostly lopsided.

It was unsteady, see-saw-like, reckless, but it fulfilled her

Needs. She needed it more than he did.

Who cares about the loveless stares and the commoner’s touch?

Who sees when the color fades from the picture and the fire in his eyes vanishes?

After all these years, his love became like water – essential yet deadly. She mastered the skill of carrying water in a basket – a notable feat!

She was doused in his love but managed to uncover parts of herself that were blotted out, like a messy piece of art

With her tools, she began to clean up the mess

Taking light from the Sun, she enhanced the beauty in the lines

She removed nothing from the old, just chipped away at the dry, crooked walls

She spent weeks anointing every space of her newly restored parts, pouring love and adoration into every orifice,

Singing homecoming songs and dancing happily and out of tune,

She was chasing away the waterfalls,

She needed to be safe from drowning, she needed a period of drought to find a natural spring.

When the work was done, she smiled; she was the woman she dreamt she would be.

So she vanished like the fire from his eyes, never to return.

She learned that, sometimes, the Heart becomes the trickster, leaving the Brain flooded with fluffy details.

Eventually, the fluff clears, and the Brain will witness the Heart’s demise and end it –

This Time, You Get To Watch Me Walk Away

I Fell In Love With The Wrong Person Far Too Young

He Is The Habit Her Heart Refuses To Let Go Of

My Heart Will Always Be Your Home

Brace Your Heart For Impact