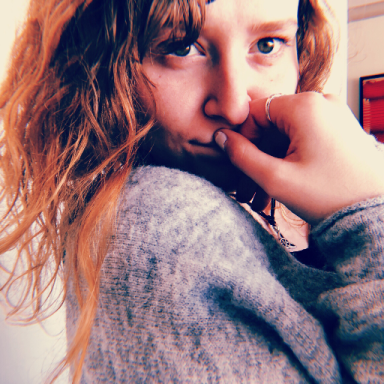 I’ll set the scene for you, she sits on the park bench under her peacoat and scarf as the wind makes the leaves play tag along the grounds. She pulls her legs up bending at the knee taking up what’s left of the park bench, as she twists the giant yellow and orange ombré maple leaf between her fingers. She’ll remember the day they meant, the messages back and forth counting down the hours until they finally meet face to face. How sad he would get every time she had to push the time back an hour.

She’ll remember the very first song he ever shared with her and the first song she shared with him and how reluctant she was because that was her sacred space, her music. How they would ask each other questions about their families and how so similar they grew up. He was momma’s boy and she was momma’s girl. She’ll remember that night in the pool swimming so close just a little closer and there it was the epic first kiss. Oh how they would stay up until 5 am talking, laughing, and kissing oh the sweet kisses.

She had no idea this boy would turn her world upside down for 3 and half years. She had no idea she was going to fall in love for the first time in her life but it would be false love. It would one-sided, jaded, and painful love. She didn’t care what would happen all she cared about was him and how they would drive around for no reason listening to their favorite songs and how he would sing to her and she would throw her head back laughing because it was terrible but he did it so he could get that giggle out of her.

The talking and texting would end every time so abruptly, poor girl didn’t know what went wrong, they would go months without talking and cross paths and pick up right where they left off. And just like that every time and every lie she believed him. She knew deep in her heart he cared for her but he knew deep in his heart he didn’t care at all about her. You see it was easy for him to lie he had great examples of it. It was easy for her to believe the lies she had great examples of it.

As the memories flash in her mind the wind picks up and she decides it’s time to go for a walk. As she walks she keeps playing the years back in her mind remember now with a clear brain and protected heart that he was never ever going to love her the right way, he wasn’t capable of it and that wasn’t his fault. She stops by the lake and stares at the horizon of trees losing their leaves and that’s when she realizes that trees can teach us so much. Every Autumn they let go of their leaves and embrace for a new life. That’s when she smiles tosses the maple leaf into the water and says, “He’s my Autumn leaves.”

Sometimes we love the wrong people in order to know how to love the right people.