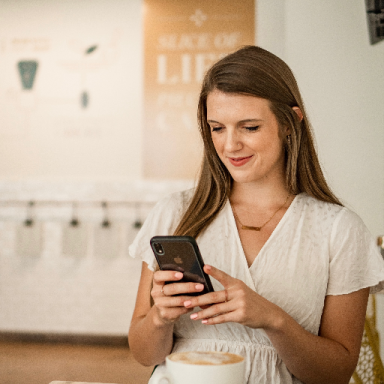 One of my most received “compliments,” especially after divulging my story for the first time to someone, is, “Wow, I’d never guess you’d been through that. You seem so tough.”

And they’re right. I am pretty tough. And they probably mean it in a really kind, genuine way.

But there are days I don’t want to be tough. There are moments I want to break too. There are situations I find myself longing to fall apart during but am constantly reminded that I’m the tough one.

The one who doesn’t need help.

The one who always figures it out.

The one who can find her own way.

The one who refuses to fall apart—on the outside, anyway.

And I’d like to take a moment to do a few things:

Acknowledge that I’ve played a massive part in earning this role. In fact, I thrive on the perception of independence and do very little to break down these walls.

Offer some insight as to why I and other tough people have found ourselves in this situation—and it’s not because we have something to prove.

Remind you that just because someone seems like they’ve got it all under control doesn’t mean they wouldn’t love someone to pick up the pieces or offer a hand from time to time.

And that’s what I’ve done—figured out exactly how to function on my own. And on the days I’m not sure how, I keep my mouth shut and head down.

I’ve built these walls, and they’re not by accident. If no one else plays a part in stacking the bricks, no one else can tear them down, right? That’s my theory anyway.

When someone reminds me just how tough I am, I usually nod, say something awkward like, “Haha, thank you!” before changing the subject ASAP and refusing to break the façade. So yes, I acknowledge this starts within me. And no, I’m not oblivious to that.

However, I’d like to look at reasons someone becomes tough and what that really means.

Personally, I built this exterior out of necessity. As a child, I went through some things that were pretty hard to cope with. I routinely found myself breaking on the inside with no one around to pick up the pieces.

When that happens as a kid, you learn something pretty quick: You can’t depend on anyone but yourself.

I’m not saying there weren’t supportive adults in my life who probably would’ve offered the appropriate help. What I am saying is this: They didn’t. At some point, I reached out for help and found nothing on the other end of the line. Find that emptiness enough times and you eventually stop asking. Which pours over into adulthood—relationships, school, career, friendships, etc. You simply learn it’s a lot easier when you do it alone and a lot less painful than silence on the other end of a call for help.

Not everyone has the same reasons for wrapping themselves in a tough blanket made of steel. Some people got burnt so badly by someone they thought they could depend on that they simply shut off. Some people go through grief and cope with it by being tough. Some people decide to be tough after watching someone in their life find pain when opening up. And honestly, some people are tough simply because they want to be.

But all tough people have one thing in common: We feel the same pain as everyone else.

Now’s the part I ask you to close your eyes and think about the tough people in your life. Everyone knows someone, whether it’s your mom, brother, friend, or coworker. They’re the ones always offering help but never asking for it. The ones who shrug it off when they’re going through something rough. The ones who seem like there’s nothing that can stop their shine.

Have a name or two in mind? Great. Here’s what I want you to do: Check in on them. Ask them how they’re really doing. Get uncomfortable. Ask about specific situations, because they probably won’t bring them up on their own (that’s vulnerability avoidance for you). Remind them that you’re always there to talk and, more importantly, listen. Give them endless hugs.

And do it often.

Because sometimes the “toughest” people are really just the ones who refuse to feel or acknowledge anything else. The ones who decided long ago they’d be better off solo.

Show them they don’t have to go that route, that you’re there, ready to help. That being tough isn’t the only way.  When they go to shake you off and assure you they’re “totally fine,” don’t walk away. That’s exactly what they’re waiting for you to do–reinforce the narrative that they’re better off not asking in the first place.