Justin is a TV/Film blogger who has spent time in New York City, Los Angeles, and occasionally on his parents' couch ...

Even though this year’s Bonnaroo and Lollapalooza festivals boast an impressive lineup, the best musical acts are just warming up over in Springfield.

It’s hard to believe that Homer and the rest of the Springfield crew have been laughing up our Sunday nights for 25 years.

Those extra large cup holders will come in handy.

10. Nothing is truly fun without your friends.

Justin is a TV/Film blogger who has spent time in New York City, Los Angeles, and occasionally on his parents’ couch in Denver, CO. Constantly obsessing and writing about all things television and movies, Justin’s work has appeared in CharacterGrades.com, FilmmakingReview.com, and MTV Networks’ Nextmovie.com. He’s also spent some time wandering the halls at Sundance Institute, Comedy Central, Fox Searchlight, and NBCUniversal. When not glued to the tube or a computer screen, Justin’s other interests include the Denver Broncos, Chipotle Mexican Grill, The Muppets, and Bruce Springsteen and the E Street Band. 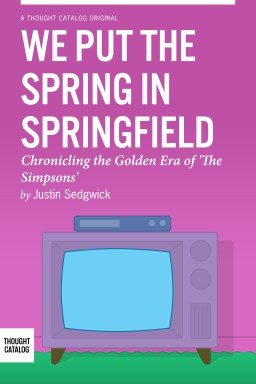