Nassau Veterans Memorial Coliseum is the greatest place on earth, or at least I thought so as a kid. The massive arena hosted New York Islanders games, Monster Jam, the circus, and concerts. How can you compete with that? Then I set foot in Madison Square Garden for the first time to see a New York Knicks game with my family and the differences were astounding.

One structure, surrounded by skyscrapers and the energy of big city hustle and bustle, the other surrounded by a McDonald’s on one side and a Marriott Hotel on the other. Manhattan vs. Uniondale.

The Barn had its fifteen minutes of fame in the early 1980s when it was also called “Fort Never Lose,” but that was a handful of years before I was born. I missed out on the magic of it all, but loved hearing stories about the glory days anyway –Mike Bossy scoring 50 goals in 50 games, interactions between players and fans at local dining establishments and bars, and of course, the Islanders winning four Stanley Cups in a row and 19 straight playoff series.

The best way I can describe Nassau Coliseum is that it’s like a home you’re outwardly embarrassed of, but proud of in your heart.

Glad They’re Gone: The majority of Isles fans are salt of the earth people, but there’s also a bunch of knuckleheads. I won’t miss the ones (even if it’s just a few) who lack class and ruin the sports experience for others. It’s one thing to poke fun at a friend wearing a different team’s uniform, but it’s an entirely different thing to throw beer at opposing players on the ice, get into fights in the stands, and steal license plates off of other fans’ cars visiting Long Island to watch a game.

Sad To See Them Go: It’s a shame that a lot of diehard fans, be it age, distance to the Barclays Center from Long Island, or general hurt from the Islanders franchise leaving Nassau County, won’t be attending Islanders home games any longer. They’re the ones who went to every game (even when there wasn’t much of a product on the ice to cheer for), knew all of the ticket takers, ushers, security guards, other fans, and even had friendships with some of the players. They’re the ones who deserved a better fate, but won’t be afforded one.

Glad It’s Gone: The “USA! USA! USA!” chants, especially when the Islanders played Canadian teams. Since the majority of players Isles fans are cheering for aren’t from the United States, this chant makes no sense. Out of the 27 players listed on the New York Islanders roster for the 2014-2015 season, only six were born in America. I remember when former Islanders captain Michael Peca had to make a public service announcement asking Isles fans not to bash Canada, as he, the team’s leader at the time, and most of his teammates were Canadian. 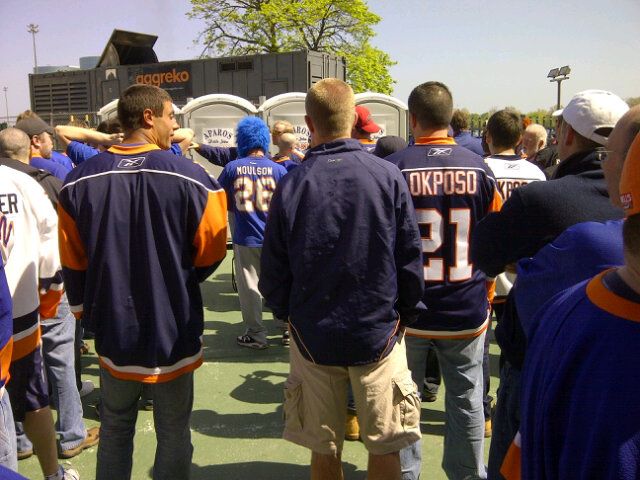 Never-Ending Lines: Since there was only one concourse and a limited number of restrooms for the 16,000 plus fans in the event of an Islanders sellout, it meant bathroom lines could span three, four, or five different gates in length, which blocked the flow of all foot traffic for people wanting to purchase snacks or see a friend during intermission.

Porta-Potties: You have to laugh when a professional sports team resorts to using porta-potties in order to meet the restroom needs for its fans, and then the porta-potty lines became out of control. I’ll never forget waiting to take a leak during Game 6 of the New York Islanders vs. Pittsburgh Penguins 2012-2013 first round playoff series and seeing mothers and their daughters standing in-line to use porta-potties. The looks the fans had on their faces after using the porta-potties were almost worth the price of admission itself.

Please Don’t Ever Play It Again: The Rangers suck. All Islanders fans can agree, even if the Blueshirts may have better teams on the ice statistically depending on the season. Did we really need to hear “The Chicken Dance” song every game, even when the Islanders didn’t play the Rangers? Let’s leave that tune behind in Uniondale and figure out a better way to tell the Rangers that they suck. Winning would be the preferred method.

Play It Again: The Coliseum crowd, and the overall feel, never left the 1970s/80s, so if you were into that type of music, you were in for a treat. You could count on “Black Betty” by Ram Jam coming on towards the end of the game when the home team needed that big play, as well as a heavy dose of 1980s arena rock. I also couldn’t help but get pumped up for the Isles power play when “Seven Nation Army” by the White Stripes blasted through the arena’s sound system. And I couldn’t help but laugh when Sheryl Crow’s “Everyday Is A Winding Road” came on when opposing teams scored against the Isles in the late 1990s, which was early and often. 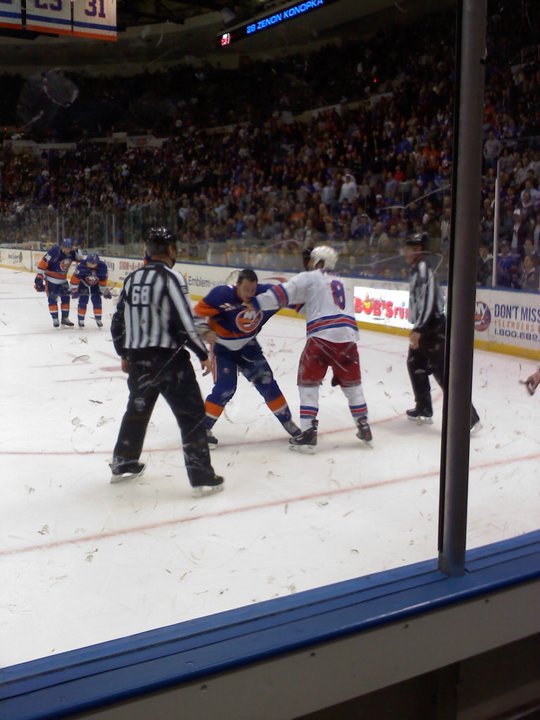 Worst Glass In The League: If you sat anywhere near the glass at Isles games, you had to look through blurry, scratched glass the entirety of the game. You would think the tarnished glass would be replaced with a clean pane the next game, but the Coliseum’s management company SMG rarely ever did that.

Best Sight Lines: However, if you sat anywhere other than directly in front of the glass at the Coliseum, you usually had a pretty good view of the ice, which can’t be said for all other arenas. Cough. Cough. Did I hear someone mention the Barclays Center?

Make The Dragon Disappear: Sparky The Dragon, while probably one of the kinder dragons in existence, has no business serving as the New York Islanders mascot, especially since Sparky was created as the New York Dragons mascot when the team played as part of the Arena Football League. Sparky had two uniforms with different colors based on whether the dragon cheered on the team with his namesake or the Isles. Like many decisions the Islanders organization has made, it’s not worth wasting too much time thinking about it. Worst. Mascot. Ever.

Bring Back Niles: Niles, as in NY Isles, is an excellent name choice, especially since the mascot is named for the correct team. The fisherman mascot made sense on Long Island, even if many fans didn’t appreciate the Fisherman jersey, which was so uncool at the time that it’s cool now. That basically sums up Brooklyn in a nutshell. The silly goal light hat and beard only adds to the Brooklyn aesthetic. Niles should be part of the Islanders organization once again, even if the costume malfunctioned and caught fire once. We’ll make sure to get the kinks out this time around.

Worse Than A High School Cafeteria: While other professional sports teams and venues take pride in the quality, diversity, and freshness of its food, the Coliseum offered pizza that tasted like cardboard, popcorn that must have been popped during the Islanders last championship victory in 1983, and chicken tenders and fries that started out as a combo, eventually switched to two separate items, and then the number of chicken tenders distributed decreased, but the price increased.

At Least There Was Carvel: The soft pretzels, hot dogs, and basically any other food served at The Coliseum left a lot to be desired. Luckily, there was one Long Island staple that you could count on: Carvel. Even though I wished the chocolate crunchies were a topping option (they were not), you could never go wrong with the soft serve ice cream and chocolate sauce on top. 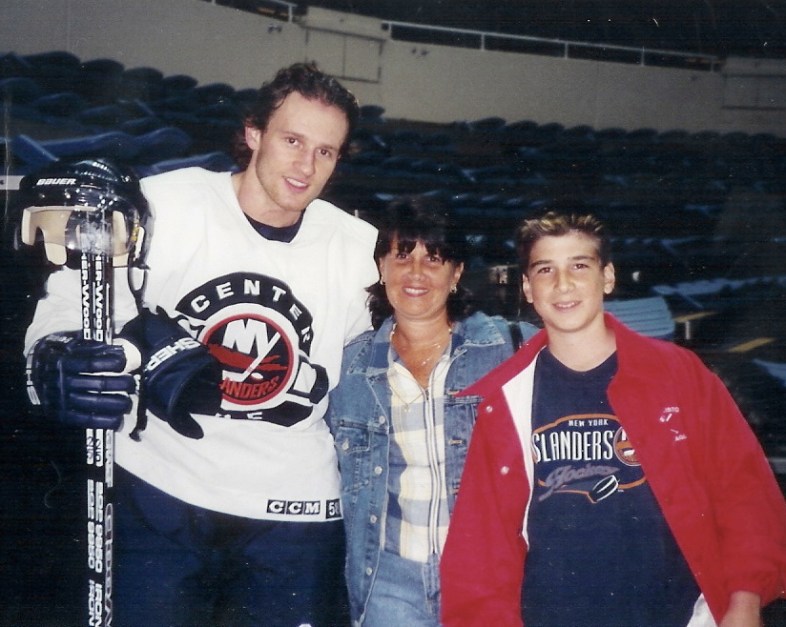 The Bad: It’s well documented that lots of skilled players the Islanders targeted during free agency or at the trade deadline (and had no-trade clauses) refused to play at Nassau Coliseum and for the Islanders organization. Former Islanders goalie Evgeni Nabokov initially didn’t report to the Isles when General Manager Garth Snow claimed Nabokov off of waivers from the Detroit Red Wings. Defenseman Lubomir Visnovsky filed to have his trade from the Anaheim Ducks to the Islanders voided. Both Nabokov and Visnovsky eventually gave the Islanders a chance and ultimately signed contract extensions after positive experiences on Long Island, but there were many other players the Isles acquired as trade deadline rentals such as Ryan Smyth and Thomas Vanek who bolted as soon as they had the chance to leave.

The Good: The New York Islanders players, and hockey players in general, are probably the kindest, humblest, and most gracious professional athletes out of the four major sports. The majority of Isles players were always willing to pose for a photo, sign an autograph, or do anything to make a fan smile. You can’t say that for many other athletes in professional sports who won’t sign an autograph unless a dollar amount is attached to it or a video camera is nearby.

Glad It’s No Longer: Dealing with the coldest, fiercest winter winds that could knock you down and then freeze you to death if you weren’t moving quickly enough in the parking lot on your way into or out of games was never fun.

Will Miss It: The cheapest parking out of the major New York sports teams, the tailgates, and the car horns honking “Let’s Go Islanders” on the way out of the arena after an Islanders win.

Cold Air Circling Throughout The Arena: Moments before the end of a period, a rush of cold air would blast throughout the Coliseum, signaling that the outside doors were opened for smokers in between periods. The temperature inside the building would drop at least ten degrees when those doors opened and you’d have to wait until the beginning of the next period to warm up again.

Opposing Goalies Sitting In The Stands: One of my favorite parts of attending Isles games when the team was horrible was seeing what star goalie would rest for the game versus the Isles and sit on a folding chair in the opposing team’s runway during the game. Since the goalies couldn’t fit on the bench, it was not uncommon to see Islanders fans seated next to Martin Brodeur, Henrik Lundqvist, and many other big time goaltenders.

I’ll never forget the Shawn Bates penalty shot goal against Curtis Joseph in the 2001-2002 playoffs, Robert Reichel skating around the Coliseum ice with his gold medal after he and the Czech Republic national team won gold for the first time at the 1998 Winter Olympics, and the nights my mom would agree to stay late after the game so I could meet, take photos with, and get autographs from Islanders players as they walked to their cars.

I’ll also never forget John Spano walking around the Coliseum promising Isles fans that he was going to turn the organization around, even though he was actually a con artist with no money, thinking Rick DiPietro’s 15-year contract was a good investment since goalies usually get better with age and he’d be a steal as he matured and became an elite goaltender, and watching Tommy Salo get beaten to a pulp by former New York Rangers goaltender Dan Cloutier as my mom grabbed onto my arm and cried.

It’s easy to feel nostalgic when something that played such a prominent part of your life is no longer. It’s also okay to remember the pain and hurt of a place that promised so much, but often gave so little.

10 Reasons Why Long Island Is The Next Brooklyn

Goodbye, Long Island: 5 Things To Miss About The Nassau Coliseum