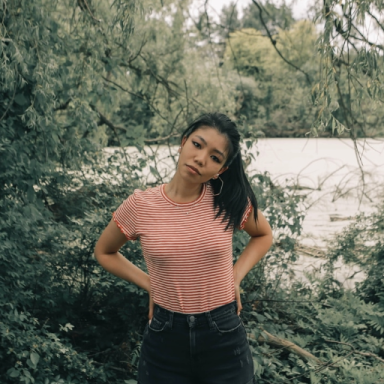 “You’re the worst, Josephine. Your mom should have done us all a favor and had an abortion.”

It all started out as random hateful private messages on Instagram sent by one person from different anonymous accounts. I simply ignored them all, but by the third-month mark, I decided to start blocking these accounts, thinking that it would discourage the person from making additional accounts on Instagram to message me.

I was wrong. New accounts were made, and new messages were sent. I also even received an email from (surprise, surprise) an anonymous email account sent to my public email address. It was like trying to fight a Hydra – cut off one head and another would just sprout anew.

“You can’t write, you look like an ugly demon and all your posts are contrived, try hard bullshit. Move to LA, or even better – get hit by a truck. The world won’t be missing anything.”

6 months came and went. I tried contacting Instagram via phone and email – unsuccessfully – and my friends lent their assistance in reporting the list of accounts I had compiled in my Blocked list and screenshot gallery. But since the reporting feature on Instagram gives you limited (and by limited, I mean practically zero) options to explain the situation, and because all the messages I had been receiving (with the exception of the email) were sent privately into my Instagram inbox which I’m assuming Instagram can’t peek at, the lords behind the Instagram sent each of us the same generic message:

“____, thank you for taking the time to report _____’s account. While we reviewed the account you reported for harassment or bullying and found it does not violate our Community Guidelines, reports like yours are an important part of making Instagram a safe and welcoming place for everyone.”

Safe and welcoming indeed. I decided to try my luck with the local police precinct, because although no actual threats had been made, I wanted a written record of everything that had been happening. I went prepared with screenshots and time stamps of every hateful, mocking message I had received, and although it took much pestering on my part to convince the officer to read the screenshots, he agreed from the linguistics that they were all sent from the same person, and yet he was painfully dismissive of the situation.

“This is all on Instagram, and there’s no actual threat involved. We can’t do anything about it.”

I’m not sure what I said to finally convince the officer, but he eventually took down an aggravated harassment report.

“Call back in 3 business days to get the case number, then you can try to get in contact with Instagram again and give them that number. Theoretically, Instagram can then look into the matter and block the IP address from creating further accounts.”

I’ll spoil that ending for you right now. I got the case number, and I was able to get a friend who works at Facebook/Instagram to file an internal report with the case number, but it’s either moving along very slowly up the chain or it’s sitting in the system’s Recycle Bin.

A week later, the anonymous hate messages were back, and I met with two more police officers who came over to my apartment to take down notes, except they paid more attention to the two cats in my apartment than to my story.

“OK look,” one of them finally interrupted me. “Celebrities get hate mail all the time. Keanu Reeves probably has a line of people telling him he’s ugly and a terrible actor, but he’s not going to mind them.”

“I realize that, and let me assure you right now that this is not a vanity issue – I couldn’t care less if someone kept calling me ugly. The point here is that this has been going on for almost a year, and I don’t agree with the mentality that nothing can be done until someone actually gets hurt,” I countered. “I know I’m not the only one experiencing cyber harassment. I know this barely qualifies as a drop in the ocean. What I’m asking is simply for you to take down a record of what has been happening because you never know who may get hurt until it’s too late.”

“I agree,” he responded. “But the thing is, this is a city of 8 million people. We have maybe 30,000 police on the force. We have detectives that can easily trace IP addresses for you, but they won’t because the cold truth is that there are bigger issues happening.”

Well there you go. If both Instagram and the police won’t take cyber harassment seriously, who can I turn to then? And now you might also be wondering, “Why don’t you just make your account private?” Perhaps part of the reason can be attributed to pride in that I don’t want the harasser to have the satisfaction of knowing they are the reason for that action, but most importantly, I cannot privatize my account. I’ve always hesitated using the word “influencer” to describe my Instagram presence, but I’ve been fortunate to have ongoing collaborations with brands that require me to keep my account public. And it’s because of this “influencer” nature that I realized something important. In this modern digital age, the internet is saturated with influencers talking about a brand’s new bag line, a revolutionary beauty cream, or even one of those Instagram-bait events. I may not have millions or even tens of thousands of followers, but if I also fall into that bucket, why not use my voice to address and hopefully influence an issue that’s so often overlooked?

It crushes me that cyber harassment is an issue that we don’t talk enough about. It infuriates me that it’s brushed off as a trivial matter. I may be able to shrug off these hate messages (which, by the way, have started making their way into the public comments section on my posts) because it’s all libel and false accusations, but I think about my impressionable teenage self, when self-esteem was at its all-time low, and I know there are others in that fragile mental state who are also victims of cyber harassment. It destroys me to think about the lengths they (or even I at 16 years old) might take to hurt themselves as a result of continuous harassment and bullying. Granted, at the same time I realize it’s important to reflect upon the other side of the situation: Those receiving cyber harassment aren’t the only victims. Harassment, especially from anonymous individuals who hide in the digital shadows, stems from a deeply internal mental imbalance, and people like this most likely have been hurt by something that has absolutely nothing to do with their targets. Instead of acknowledging that they need help and asking for it, they take it out on message boards and private inboxes under false names and faceless avatars. In a sense, they too are victims, and if cyber harassment continues to be brushed under the proverbial rug, neither side of the victim spectrum can receive the help that they need.

I hadn’t told my parents about what I was going through because I thought they would be worried for my sake. Instead, when I finally opened up to them, they didn’t have a shred of sympathy to add to my self-pity party.

“Why would you let faceless words weigh you down?” they said. “You know who you are, what you’re capable of, and you know what’s true and what are lies. If you have self-love then it makes those around you powerless over your emotions or thoughts. There will always be people who don’t like feeling that they can’t control you. It’s all the more reason not to give them the power.”

Well said. And now I pass that bit of parental wisdom and some of my own revelations to you.

No matter who or what age you are, if you are experiencing cyber harassment, please do not feel like you are powerless and have no one to turn to. We all have the right to freedom of speech, and it’s a luxury that is unfortunately often abused. Freedom of speech is not an excuse for cyber harassment and digital bullying. It’s not a loophole for attacking thoughts, ideas and opinions without justification, but if there are trolls on the Internet who are taking advantage of their freedom of speech by hurling hateful word vomit at you, it is all the more essential that you turn the tables and take advantage of your right to free speech by using it to facilitate meaningful conversations. I’ve been through that struggle myself – it took me a year’s worth of continuous cyber harassment from the same individual to come forward and speak publicly. The police and Instagram’s reaction (or more accurately, lack of reaction) to my problem certainly didn’t exactly give me confidence to speak out. Ironically, social media platforms were birthed to encourage self-expression, and yet with the onslaught of cyber harassment, we seem to be achieving the opposite effect where victims feel the pressure to remain silent about their situation.

Moving forward, we can simply continue to report or delete a hateful comment, but all it accomplishes is a temporary disappearing act. The social media platform can block the IP address from creating new accounts, but all that really means is a band-aid over the issue. Raising awareness to a problem requires people talking about it, so for those experiencing cyber harassment, or any sort of harassment for that matter, I hope you’ll find the strength to share your experience like I am doing today. Freedom of speech is not an excuse to harass someone anonymously online, but it provides the perfect opportunity to start a conversation about this severely underestimated issue.