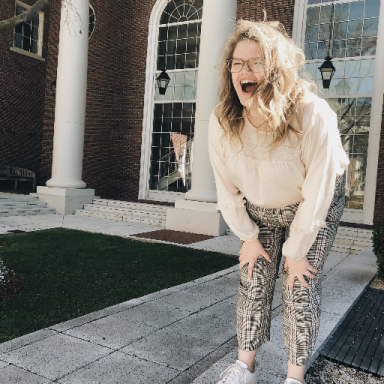 People keep telling me that I look happier now. They say that they weren’t sure why I was part of that group in the first place, because it just didn’t seem like my personality fit. And you know what? They’re right—I didn’t fit in.

I tried so hard to like the things you guys did, tried to learn the games, the terminology, the shows. I always blamed myself and I always felt “lucky” that you all still wanted to be my friend even though I didn’t like the same things you always talked about.

I would sit at the table or in bedrooms for hours and just listen. Just listen and stay quiet while you all went on and on about things that sounded like a foreign language to me. And when asked my opinion, before I could get a word out, someone would say, “Oh, she doesn’t know what we’re talking about” or “Why don’t you ever participate in the conversation?” When I tried to explain my frustrations, I was always the bad guy. I was too emotional, too dramatic; I was overthinking it. I felt like I was there because someone felt like they had to invite me. Like they thought if I wasn’t there, I would throw a fit.

I think it got to the point where I didn’t feel comfortable saying anything anymore for the fear of annoying you. I didn’t want to risk losing what felt like the only friends I had. So I stayed quiet for years. I listened to everyone else’s problems while I was secretly dealing with my own. I was diagnosed with a high level of panic disorder and my anxiety/depression was at an all time high, but I still stayed quiet for that one fear of being alone.

It slowly started to feel like a job being your friend. I felt like I had to be around or else I would lose some type of friend membership. I disappeared for two weeks and no one said a word to me. It was draining to keep filling myself with fake hope and happiness, and I knew one day I would come crashing down.

One day, I had enough. That was the day I decided to start focusing on myself and no one else. That was the day I realized that I did have other friends. I did have people that really cared about me and wanted to see me happy and, more importantly, knew when I wasn’t. People that I pushed away because I spent so much time trying to please you. People who I felt comfortable going to if I had a problem or if I needed advice or just wanted to watch a movie or show that I understood.

It’s hard to explain exactly the way I felt while I was in that group, and this is all the stuff I didn’t know how to say in person when I told you I needed space. I love you all as individuals, and I hope one day we will be close again. For now, I am happy, and I never thought I would say that and for once mean it.