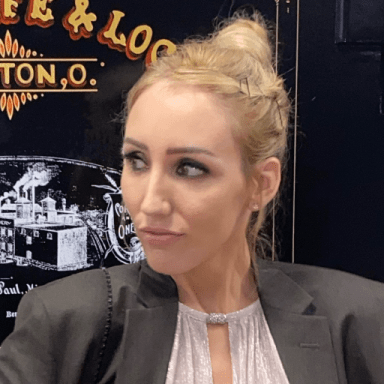 I loved a man once, but I have loved so many before, now that I think of it. This is why I wonder how others can say they have only had one, two, or three true loves in their lifetime. Maybe I love too easily? You can put me into that category.

Each one of these relationships helped me find the one that stayed forever – the happily ever after. Eventually, when you have moved on from your past, you can say, “Thank you, next.”

Once I met a man who made me believe in fairytales not because he was romantic, but because that’s just how he made me feel. We met at a party in the Hollywood Hills. He said hello and I was starstruck, even though he wasn’t actually famous. The day we broke up is a memory forever embedded in my heart. He asked me if I was happy during one of our fights, and in that moment, of course I was not. I angrily replied back, “No!” That next day, he moved out; when I got home, everything of his was gone and I was without a roommate. Years later, we met again outside of a lounge in Hollywood. When we saw each other, we both froze, as if we were made of ice. Meanwhile, a hot dog vendor and noisy crowds of people passed by, making sure to bump me, but I wasn’t shaken. In most movies about love, the couple slowly walks up to each other and kisses or goes running into each other’s arms—we were nothing like that. Instead, we both began to do what seemed to be a dance, with one foot behind the other, in one direction; we were walking around each other in a big circle. It felt like we were meeting for the first time again and cautious like animals, sniffing each other before attacking.

Once I met a man who was more of the quiet type because his intelligence allowed him to sit back and observe in confidence. I had no idea he enjoyed having such a good time; he had the “work hard, play hard” mentality. I discovered his heart when he became cautious of hurting me. He even cried for me when I accused him of being someone he was not. He did not have a huge ego, and his kindness became a patent on my heart. He treated me like a princess, and we had the type of conversations you don’t forget. We learned from each other about life, and I let him educate me with his knowledge. He was open to hearing my opinions, my feelings, and he never made me feel small.

Once I met a man who I had known for many years before, but he was just a guy I knew. We had only talked once before about a personal problem, but the conversation only lasted for a minute; words were exchanged and then forgotten. He made me blush because I respected him. There is nothing like a man you can respect leaving you with pink flushed cheeks. If only he had noticed, he would have understood how much I cared for him even back then and loved him as a friend. Luckily, the universe lined up and we were introduced into a new world, to ourselves. We stayed up all night and walked everywhere, lectured animal carriage riders and told them it was animal abuse. We proclaimed our love for animals over humans. We crossed off almost everything on my to-do list, and he tried so hard to make all my dreams come true. It was a Cinderella story—I only had so much time before it struck midnight. We didn’t sleep, we just lived.

Once I met a man who was my partner from the moment we met. We took college classes and studied together like high school sweethearts. He was a true love because he hand wrote me a letter. I cannot remember if I was supposed to have read it or not, but he wrote that he knew the love was real, even though it was ending. I remember when we first spent time together in my dorm and he let me paint his nails for him, which he had never done before. I did a horrible job, quite possibly on purpose; let’s just say I made sure to use a lot of glitter. I remember when he sketched me, and I felt like the strong female lead in the movie Titanic. When he came back from a cruise with his family, he gifted me a bracelet that was knit black and hot pink and said my name.

Once I met a man who lived in Vegas. He would pick me up from California every weekend. We would listen to EDM the whole 3 ½ hour drive. Then one day he played the Disney song A Whole New World from Aladdin for me. He wanted Vegas to be my new world. He took me on a helicopter ride to see the whole city and all of its neon lights and beauty. It was a fantasy world, though, and I knew I couldn’t leave my reality. I always wore pretty dresses and wedge heels so that my feet weren’t in pain. I remember a little girl in the bathroom said I looked like a princess, and he reassured me that I was one.

Once I met a man who I would call in the late hours of the night just to have him near me. He would sit with me on my outside balcony and talk about anything I wanted. When we spoke to each other, we had passion in our words. He was excited about us, the idea, and I was content with him being perfect for me. I think I liked him more than I could admit to, but I was scared. I knew that even though he was everything to me, he too was also holding back. I wanted more from him than he could give me.

Once I met a man who never left. We strayed, but we never got far. Have you ever had a love that would make you drive away, only to get to the gate and return back? It’s a relationship that started with a similar hello but followed with an understanding unlike ever before. We both were looking for love, yes; we both needed love, yes. Maybe that’s why it worked, because we both knew we would be good to each other. It is a simple appreciation of trust in the person and yourself.

To me, patience is a virtue in love, because love can exist and still need time to grow. This is why you can be in love and not know it. You might be scared, or maybe you have been hurt before, so it might take a while to really understand love—to realize that you are very much in love, to come to terms, and to grow into it.

We are all blessed to be in love if we’re lucky enough to find it within ourselves or with a partner. Finding love with another, I’ve learned, is not the goal—the goal is self-love. Luckily for me, once I met the right man, I also found myself with him. Now, every day, I tell him, “Thank you.”

Keep up with Jolene on Instagram, Amazon and TikTok