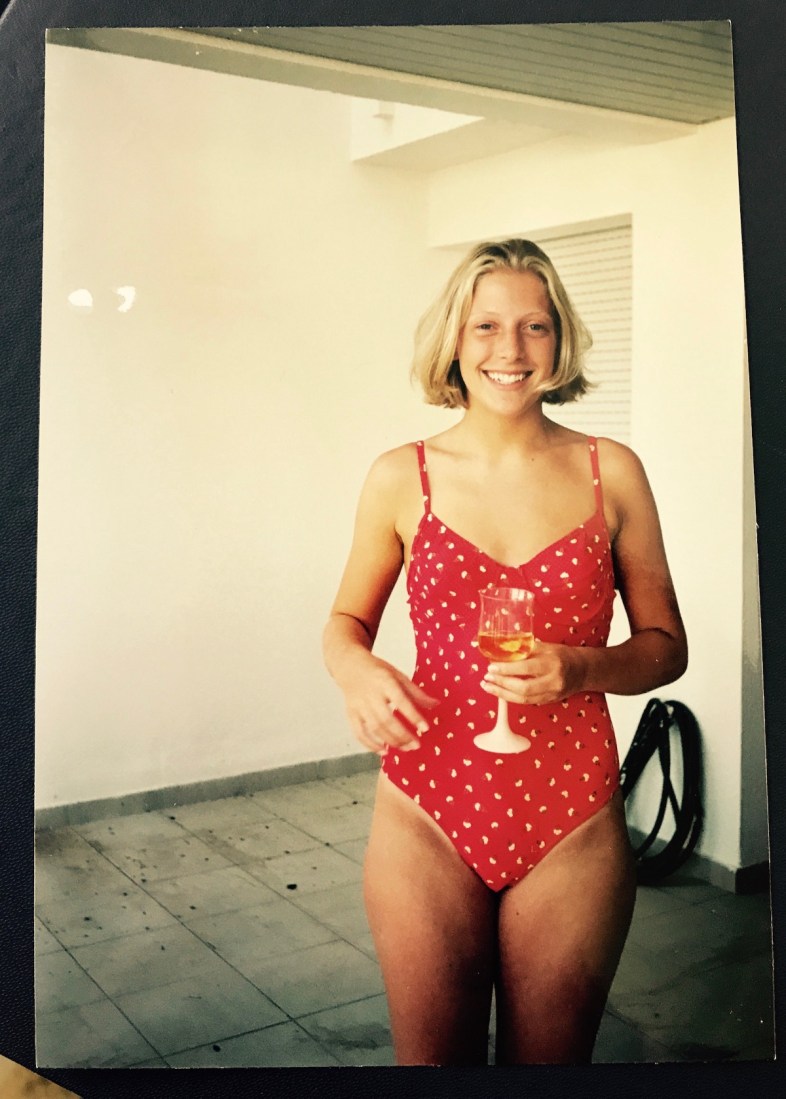 Yes, that’s me in the red swimsuit, aged 16 and full of hope. I’d just received my GCSE results — a big shiny buffet of A* — but that didn’t matter at the time because, well, thighs, and I was already envisioning my thin future full of men. Oh my.

Fast forward 20 plus years and I’m sorting through old photo albums when I see her.

She’s staring out at me, page after page, imploring me to see her beauty. And I do. I see that she was indeed beautiful.

Wait, did I just pay myself a compliment? Ballsy, I know.

It’s not always been this way though. I was never enough of anything; you know, the usual story. But if this story is so commonplace, why dismiss it? It is, after all, at the core of all that inhibits our ability to form ‘real’ relationships.

When I look at this bright young beauty I know that, despite her academic success, she was clueless. Thinking too little of herself, giving too much of herself away. Life had thus far taught her she needed someone else, likely a man, to validate her existence.

To tell her she was, over and above anything else, easy on the eye. Sigh.

My sense of identity was wrapped up in what others thought (or what I thought they thought) of my body. And I readily ditched my principles if they threatened to interfere with the possibility of someone acknowledging that I was, indeed, easy on the eye.

But, when I think this over, I wonder if men sometimes become female-identified? Do they edit themselves in order to bag the shag? I’m sure they do, and yet somehow this idea falls flat. The classic heterosexual set-up will still pitch him as the predator (the watcher) and her as the prey (the watched).

It’s a game in which we’re all complicit since we’re all motivated by the desire to be desired. We all want to be seen. To be held. No matter the cost to the image we hold of ourselves. So that means we’re all in this together, right?

When we look at a woman, we just can’t get past her sex.

And who can blame us? Turn on the TV and it’s tits galore. Strippers idly gyrating (in the background) of mainstream shows as men (in the forefront) have the conversations pivotal to the storyline. Switch channels and we see murder victims picked over in all their naked rape-torn glory. It’s a constant stream of female flesh being broadcast into our subconscious.

Sex, we believe, brings us together. But really it’s driving us further apart so long as men desire — and women desire to be desired — in this superficial way. It’s a system of conquest and seduction that propagates all of our insecurities.

But I’m not here to blame the men. Instead, I want to ask the women this.

Are you subscribing to your own objectification, knowingly or unknowingly? What kind of ideals are you holding yourself, and other women, to?

We may buy the glossy magazines without knowing what we’re really buying into. We may say we want equality but puke up dessert and run to the scales. Worse still, we may judge each other for doing — or not doing — the same.

When we chase physical perfection, we may believe we’re chasing an idea of freedom, empowerment, but it will never come to us this way. Beauty, and the value we place on it has nothing to do with appearance. Instead, it prescribes a type of behavior, it’s a cultural requirement that allows the watchers to watch.

And, even if a woman challenges the beauty industry for profiting from her insecurities, she may add “but it’s just as bad for men these days.” No doubt it is, but we don’t always have to look at the things that hurt females through the lens of the male experience as if to validate the pain. It stands on its own.

Until we understand this, women will remain sexist too.

It doesn’t serve us to simply attack or blame yet another patriarchal construct that we believe exists outside of us. Instead, we must deconstruct the ways in which we are perpetrating it ourselves.

If we don’t address our own inner prejudices we won’t change a damn thing on the outside.

Trust me. I struggle to come to terms with the time and money some women invest in their appearance. I can’t get my head around the idea you can be both ‘woke’ and get your nails done every week (sexual and intellectual). Thus I stereotype my glamorous sisters and inhibit my own emancipation.

My conscious (feminist) mind tells me a woman can dress however she damn well pleases, so long as her motivation is founded in self-expression, self-celebration — dressing up should empower, not debilitating.

But my subconscious mind still tells me dressing up means dumbing down (sexual, not intellectual).

And that’s the problem. However honorable our conscious intentions may be, our subconscious mind is mostly running the show. It’s what fuels our confirmation bias — the way we seek evidence of what we believe to be true; that a woman is to be watched and if she does have an opinion, this serves to negate her femininity, her sexuality.

So let’s look at the ways in which we’ve been wired by this belief system and the ways we engender its continuation. If we bear witness to the system at work on the outside, we’re better equipped to start changing it on the inside.

With this, I want to take you to Rome, a veritable birthplace of patriarchy and a city I have a longstanding love affair with. I know, the irony is not lost. Whenever I’m there, however, I actively seek out the women. It’s a form of overcompensation, redressing the balance, as men in clericals line the streets.
I was on my habitual pilgrimage two weeks ago, looking for Our Lady, for pagan goddesses, mythical heroines; the divine in female form — I sought her out in churches, temples, galleries, and museums.

It was all so binary, this or that, either-or. Not just in the rigid gender scripts played out by men and women over the centuries, but more so in the grotesque parodies women have had to embody — her flesh defines her, detains her.

Next, I took in a collection of Hollywood portraits from the 40s and 50s. Nearly all were girl-next-door types transformed and catapulted into stardom — their allure manufactured to meet a collective desire, their talent an afterthought. And yet, behind the smoke and mirrors, each had a story to tell.

Then came an exhibition on Marilyn Monroe, a sexpot whose activism is oft overlooked. She used her body to gain influence and set new precedents for future female stars. She was also used for her body. It may have served to emancipate others, but it sadly trapped her.

So let’s pause here and ask, what does any of this have to do with the girl in the red swimsuit?

Everything. She’s grown into a woman who aspires to embody each and every one of these female icons, in all of their grace and disgrace, their serenity and disquiet, their sensuality and intelligence, their vulnerability and stoicism, plumptious, fecund, taking up space.

I am all of these women inside one woman, one body.

The way I look does not tell you one story, but a hundred different tales of who I am, who I’ve been and who I want to become. I do not have to choose just one.

Whichever I choose doesn’t have to be beautiful in your eyes, but mine.

Whichever I choose doesn’t have to be desirable to you, but me.

Our bodies are physical manifestations of all the uniqueness that’s contained therein.

Understanding this is how we make the transition from male-identified to self-identified, how we become a woman one-in-herself. Until we make that transition, however, we play into the hands of prescriptive social and heterosexual ideals that prevent anyone from truly seeing or holding anyone else — no matter how deep our desire runs.

Girls may temper their talents to appear more attractive to boys. Grown women may hide their intellect so as not to threaten their lovers. Are we truly willing to believe that men and boys are intimidated by the female brain?

Defining masculinity and femininity in such narrow terms (active and passive) narrows the terms of our relationships.

We must, however, start with the women and our long fight to live in and love our bodies, as they are, before we share them with anyone else. I know we cannot be feminists if we think only of women, but our feminism takes root first and foremost in our experience as women.

For centuries we’ve had no control over our outer worlds, yet we’ve readily relinquished control of our inner too — the very place we can instigate change.

Let’s stop watching each other and let’s start watching ourselves instead.

And let the men watch.

Let them observe your emancipation, the way you see, hold and respect yourself irrespective of them. That’s sexy as hell, IMHO, as your flesh, no longer a barrier, takes on new resonance as the container of you.

And you are enough.

Feminism, you see, doesn’t take sex off the menu. It aims to get us all off on the experience of being fully alive and free, relishing the skin we’re in. It aims to give new meaning to our coming together.