Skip to content
Report This Article
What is the issue?
Ever more pigeon-holed as the “stressed out protagonist,” what follows is an in depth analysis of some of Leonardo DiCaprio’s more notable works, from which the said description is derived. This contributor apologizes for any glibness, a tone employed in aid of pedestrian honesty.

Plot/Problem: Guilt-ridden man suffering recent death of wife gets involved with an intricate tiered network of “dream levels,” in efforts to extract unconscious information from sleeping victims, until he has no fucking clue—like the audience—of what is going on.

Primary reason for stress: Can’t differentiate between “dream levels”; absolute loss of objectivity. Manifestations of physical impossibilities only serve to whack him out more.

Commentary: This film was fucking absurd. People who are impressed by this film are the kinds of people impressed by Salvador Dali and rave music.

Plot/Problem: U.S. Marshal investigating a disappearance at an ominous psychiatric facility on a small island is slowly driven insane by said place, or maybe they are crazy?

Primary reason for stress: Gross anomalies of perception instill a sense of insanity, and while he “objectively feels” (yah, oxymoron) that it’s Shutter Island that’s crazy, he doesn’t really know, and wonders maybe he’s the crazy one. This cyclical quandary of who is actually crazy is enough to drive one so.

Secondary reason for stress: Can’t leave the island because of bad weather and problems with the boat.

Commentary: I really like how it ended, where it was implied that DiCaprio wasn’t actually crazy. Or am I crazy for thinking that?

Primary reason for stress: Intensely sensitive job promotion negotiations at work while severely depressed wife is freaking out in that bourgeois way. Tries to be empathetic, but she’s so mean (and vice versa), that vicious cycle of a relationship’s near demise.

Commentary: Richard Yates rolls in his grave, and rolls a joint.

Plot/Problem: CIA operative in the Middle-East caught in diplomatic struggle between terrorists and agency for whom he works.

Primary reason for stress: Finding CIA protocol inapplicable in a complex ever-changing situation between multiple parties whose alliances are not implicit, he must employ morally questionable techniques to gain information, while answering to bureaucratic constraints at home.

Secondary reason for stress: His boss is sort of a dick, and he keeps getting shot at.

Commentary: In order to submerge myself in the experience, I had hummus while watching this film. I thought my cell phone was a bomb when it vibrated. Primary reason for stress: Has a gut feeling mob boss is “onto” him, but obviously has no way of confirming his suspicious which, in the absence of actuality, is paranoia. Thinks he’ll get exposed at any moment, totally going manstrual.

Secondary reason for stress: He really, really needs his cell phone to call and text re: urgent matters, but rarely is home to recharge it.

Commentary: DiCaprio did a fairly accurate job brandishing a gun and acting paranoid, though his Boston accent was strained. I felt bad when he got shot in the head.

Primary reason for stress: Difficult task made more complex by a Civil War, antagonistic rebel army, and brief stint in jail. And it’s really hot there.

Secondary reason for stress: Doesn’t have time/energy to deal with attractive female journalist.

Commentary: (I didn’t actually see this movie, and culled what I could from Wikipedia.)

Commentary: As Howard Hughes c/o DiCaprio became more and more like a hippie (i.e. not doing jack shit) I got more and more annoyed. This was Leo’s one big shot at Best Actor, too bad.

Primary reason for stress: His father’s killer “Bill the Butcher” (Daniel Day-Lewis) runs the town and Leo’s really angry inside, yet fearful of his own life. But it’s complicated, because he sees Bill somewhat as a father figure. He doesn’t know whether to kill or cry.

Secondary reason for stress: The chick he likes is also into Bill, so we have a three-way love triangle—which is sexy, until you consider this was when condoms were rendered from animal intestines.

Commentary: DiCaprio’s Irish accent was horrible, and I have fairly conventional biases, so I didn’t like that Cameron Diaz was taller than him. Also, Scorsese here reeked of Oscar Award ingratiation.

Stress Level: 6.1 (should be more, considering the circumstances, but Jack Dawson is one mellow bro).

Primary reason for stress: Rising water inside the ship, complete chaos and havoc outside the ship. Making of sweet love curtailed by historical tragedy. Nowhere to go; death imminent.

Secondary reason for stress: Elitist mom of new gf doesn’t like him because he’s broke; gf’s fiancé is jealous and being a douche.

Commentary: Total cheese-fest of a movie, but still really entertaining. I try to stay away from girls who love this movie, as they are unrealistic about love.

Plot/Problem: Dysfunctional family and the plight of caring for a 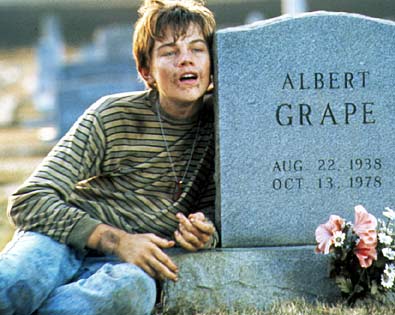 Primary reason for stress: Has difficulty communicating, and is trapped inside the cacophonous shell of his person. Can intuitively sense his brother’s (Johnny Depp) internal struggle between resentment and empathy.

Secondary reason for stress: Sits in bathtub all night freezing his ass off. Doesn’t know what his boner is.

Commentary: DiCaprio’s performance was top-notch here. He was a truly talented actor.

The 50 All-Time Greatest Quotes About Mothers