Skip to content
Report This Article
What is the issue?
Patton Oswalt and Thought Catalog’s Jim Goad agree on nothing. Watch Patton throw down hard for Hillary while discussing the upcoming election, globalization, social media, and more. 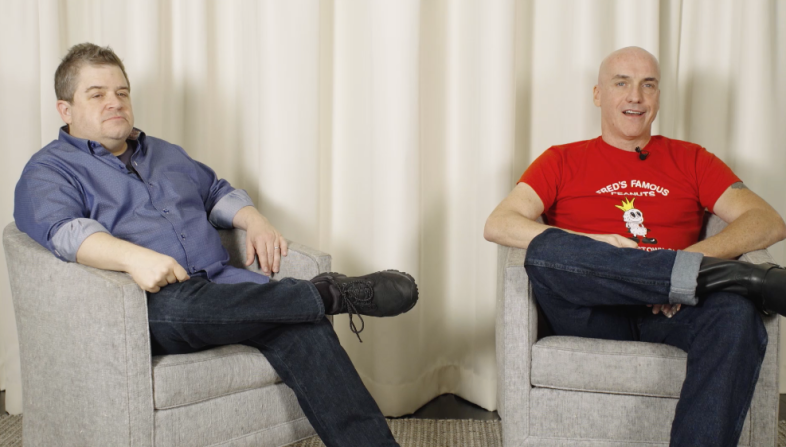 ON THE SAD STATE OF PUBLIC DISCOURSE:

“People don’t—not only do they not talk, uh, they’re only, it seems like they’re only in it to collect scalps, uh, and then show—it’s all about, ‘I shut this person down’…whereas the only way that, especially to keep the country moving forward historically has always been when two radical sides [say], ‘How can we both work this so we can all move forward?’ That’s the only way we’re going to move forward….We’re holding up the loudest, most doxxing, uh, reactionary assholes as representative of the entire movement. Again, on both sides, and that’s just not how it is. It’s almost like the country has turned into the way that I remember being when I was in my early 20s when I was super judgmental but also defensive about myself. I would lash out in some really gross ways.

ON WHETHER HE FEELS WARMLY TOWARD HILLARY CLINTON:

“I don’t need to feel warmly towards my leaders. You know who—my accountant is the coldest motherfucker on the planet. I don’t go out to lunch with him and then go do paintball and laser tag. That guy handles my money, and that’s all I want. I want a leader that—I actually, you know what? NO. I do feel fuckin’ warmly toward her….Yeah. Because this is a person who, if you look at her history, she started off young, idealistic, but she was very much like, ‘Hey, I matter, I wanna contribute, I’m here, I’m present, I’m not cynical, I’m not brushing things off.’ And every single step along the way [people kept saying] ‘No, you can’t do that, no get the fuck out of here.’ And she just dug her heels in and moved forward. Now if she seems a little cold and brittle and paranoid now, I wonder why that is?

ON TRUMP AND CLINTON BEING POWER-HUNGRY:

I want my leaders to have an insane drive for power. What Trump has is an insane drive for vengeance and self-justification, not power, based on every single thing he has ever said when he’s, literally, no, when he’s campaigning he will say within the moment of the conversation if they mention an opponent of his, he’ll slam them or slam a policy that they have, and they go, ‘Yeah, but earlier you were positive about it,’ and he goes, ‘I don’t care.’ He just wants to win in the moment, but he wants to win, but nobody benefits. She wants power so that she can then implement all these things she wants to do. He wants POWER. He wants power…and there’s a period and there’s nothing beyond that word. It’s a blank page.

Whether or not you like globalization, it’s here. So let’s engage with it in a way that benefits us. Well, we can’t just go, ‘I don’t like globalization, I’m not gonna, I’m not gonna engage with it.’ Well, then we’re fucked. We’re fucked. A lot of things about globalization really, really suck. But it’s not going away. A lot of shit about the Internet really, really sucks. Not gonna get unplugged. We have to deal with what’s here and make it better.

ON SOCIAL MEDIA AND OUTRAGE CULTURE:

This is going to sound radical and extreme, but the fact is that a lot of our online economy, um, Twitter, any kind of social platform, runs on, makes money, generates revenue through outrage. The only way to cure that is to crank the outrage up, uh, until it no longer has the impact that it does and we get a new generation that actually, out of almost rebellion, craves a little nuance, a little meeting in between, you know, right? It’s almost like the way that the millennials are rebelling against the Gen-Xers, we’re going to need a wave of people to rebel against the millennials and a lot of their outrage….And you’re going to hate me saying this, but there have been a couple of social justice warriors that were actually helpful to me as a comedian because it made me go, ‘Oh, I should be better at being offensive.’ If anything, they were offended at how lazy I was about being offensive. Mel Brooks said, ‘Try to rise below vulgarity.’ You know, so that I’ve always, always remembered.…That’s why I was initially, so, so, even way too much anti-social justice warrior was when that woman Suey Park famously said, ‘Context doesn’t matter.’ And when I heard that, I was like, if that becomes the norm, that’s the death of comedy, that’s the death of everything, and that’s the death of discourse….So again, um, context is everything.