Skip to content
Report This Article
What is the issue?
There’s something about the thought of being dragged to the murky ocean floor and eaten alive by a 7,000-pound monster that makes being shot point-blank in the head seem almost merciful. 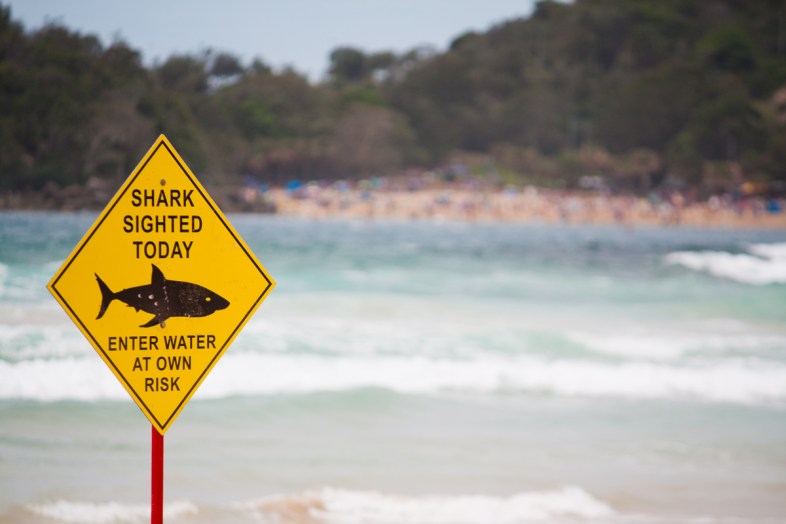 Maybe it’s the deep dark wall of water that inspires such dread—the sense that once you dive into the ocean, you may as well be an intruder from another planet.

Maybe it’s the cold, dead eyes that all sharks seem to have, those emotionless orbs that don’t express the merest hint of anger or bloodlust as their rows of massive serrated teeth rip you to pieces in the bloody, foamy water.

There’s something about the thought of being dragged to the murky ocean floor and eaten alive by a 7,000-pound monster that makes being shot point-blank in the head seem almost merciful.

Surfing that bloody wave, here are 13 historical cases where humans encountered sharks and wound up dead.

In the summer of 1916, coastal New Jersey was gripped with terror amid a 12-day string of five shark attacks, four of them fatal. From July 1 to 12, 1916, amid a blistering heat wave that sent many New York and Philadelphia residents seeking solace on Jersey beaches, the public was whipped into collective panic over the idea that a malevolent “man-eating” shark was preying on swimmers. Up until this time, regular citizens as well as professional ichthyologists considered sharks relatively harmless. This string of attacks—still unsolved—forever altered that perception.

In the public consciousness at the time, this was all the work of one shark—a “rogue” shark—slowly working northward along the Jersey shore and into some inlet creeks. Newspaper accounts fanned the panic by describing a “sea monster” or “sea wolf” that was gleefully eating people alive.

On July 14, two days after the last attack, a man named Michael Schleisser captured an eight-foot young great white shark. He claims to have retrieved 15 pounds of human remains from the shark’s guts. Experts today still squabble over whether one or more sharks was responsible for the unprecedented string of attacks.

Ichthyologist George Burgess, who maintains a database that studies over 5,000 shark attacks, described the Jersey incidents the “most unique set of shark attacks that ever have occurred.”

2. Nine hundred sailors floating in the middle of the ocean with sharks circling them.

Only five days after delivering key components of the atomic bomb that would obliterate Hiroshima, the massive USS Indianapolis was torpedoed in half by a Japanese submarine.

The 600-foot ship sank in a mere 12 minutes. Of the nearly 1,200 men aboard, around 900 made it into the water. And there they would remain amid the Pacific Ocean’s vast expanses, covered in black oil and floating only with life preservers for the next five days.

According to 19-year-old seaman Loel Dean Cox (yes, Beavis, I realize I said “seaman” and “Cox” in the same sentence):

We were sunk at midnight, I saw one [shark] the first morning after daylight. They were big. Some of them I swear were 15ft long. They were continually there, mostly feeding off the dead bodies. Thank goodness, there were lots of dead people floating in the area. We were losing three or four each night and day. You were constantly in fear because you’d see ’em all the time. Every few minutes you’d see their fins—a dozen to two dozen fins in the water. They would come up and bump you. I was bumped a few times—you never know when they are going to attack you. In that clear water you could see the sharks circling. Then every now and then, like lightning, one would come straight up and take a sailor and take him straight down. One came up and took the sailor next to me. It was just somebody screaming, yelling or getting bit.

According to Dr. Lewis Haynes, Chief Medical Officer on the Indianapolis:

I saw only one shark. I remember reaching out trying to grab hold of him. I thought maybe it would be food. However, when night came, things would bump against you in the dark or brush against your leg and you would wonder what it was.

According to sailor Woody Eugene James:

After days of horror and blistering sunburns and madness and hunger and dehydration and drinking saltwater and hallucinations and endless shark attacks, a rescue crew finally arrived to pick up the 317 survivors.

It is estimated that anywhere from a few dozen to 150 of the shipwrecked sailors were eaten by highly aggressive whitetip sharks.

3. Two hundred soldiers shoved into baskets and fed to sharks.

For all the attention paid to Nazi atrocities during WWII, you hear very little about psychotic brutalities committed by their allies, the Japanese. If you’re entirely unfamiliar with the subject, the Rape of Nanking is a good place to start.

What became known as the “Pig Basket Atrocities” involved the deliberate murder of 200 captured Allied soldiers by Japanese forces in Indonesia. The soldiers were squeezed into three-foot bamboo baskets, placed onto trucks, transported to the coast by railway, and loaded onto boats. Once the boats had sailed out into waters known to be teeming with sharks, these soldiers who were crammed into tiny bamboo cages were thrown overboard and eaten alive. 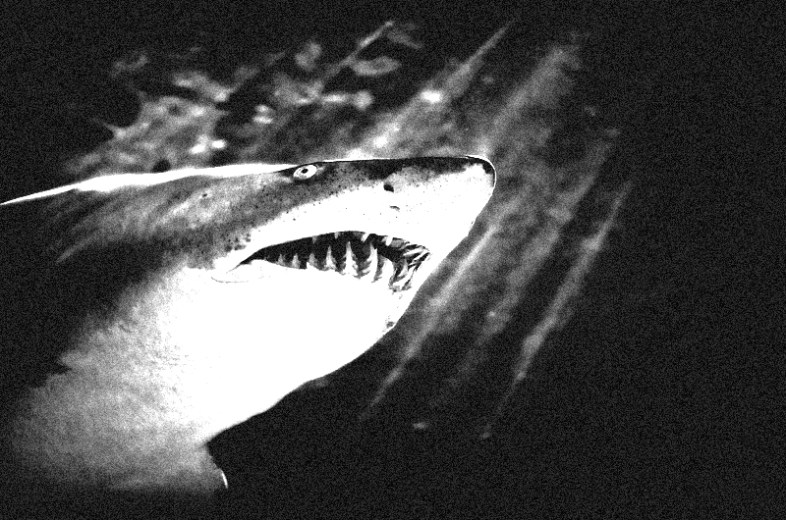 4. The shark was “dinosaur huge…it was this giant shadow.”

In 2010 while attempting to escape sweltering heat near Cape Town, South Africa, 37-year-old Lloyd Skinner wandered into the ocean to cool off. Observers on the beach saw the water swelling around him and began frantically waving their towels and screaming to get his attention.

A man named Gregg Coppen observed the attack from his beachfront home:

Holy shit! We just saw a gigantic shark eat what looked like a person in front of our house! That shark was huge! Like dinosaur huge!….it was this giant shadow…it sort of came out of the water and took this colorful lump and went off with it. You could see its whole jaw wrap around the thing—which turned out to be a person.

We saw the shark come back twice…It had the man’s body in its mouth and his arm was in the air. Then the sea was full of blood.

Based on eyewitness descriptions, the shark was a great white that weighed around 10,000 pounds.

5. He dove underwater to see his friend being eaten alive.

In June of 1959, Gerald Lehrer and Robert Pamperin took their girlfriends along with them to La Jolla Cove in California. The two men were diving for abalone about fifty yards from shore when Lehrer suddenly heard Pamperin screaming for help. He turned to see Pamperin thrashing waist-high above the water before being pulled down. Lehrer then dove down toward the ocean floor—about 40 feet deep—where, to his horror, he observed a shark about 22 feet long with the bottom part of Pamperin’s body in his mouth. He reemerged and swam to shore seeking help. It was too late. The only trace of Pamperin that remained was one swimming fin.

6. He heard a “whooshing” sound as if “a boat had gone by,” then “everything turned red.”

Like the previous case, this involves a pair of male friends diving for abalone off the California coast. In 2004, Cliff Zimmerman was diving with his friend Randall Fry when suddenly he heard a “whooshing” sound and felt ripples in the water “as if a boat went by.” He saw a shark fin but no trace of Fry—and then “everything went red.” Randall Fry’s head and body were found the next day. According to Zimmerman:

It was the most dramatic thing I ever saw in my life. It’s just not real. This monster came so fast, it happened so fast and was over so fast you think, “How can this happen?”

7. He told the doctor what it felt like to be grabbed and dragged underwater.

In 1936 while swimming at a Massachusetts beach, 16-year-old Joseph Troy, Jr. was grabbed by a six-foot shark and dragged underwater. He temporarily survived the attack and was taken to a hospital, where surgeons began amputating his leg. He died on the operating table, but not before telling the attending surgeon that being bitten by the shark was not nearly as horrifying as the helpless feeling of being dragged down to the ocean floor.

8. A pair of sharks pulled him 400 feet underwater.

While deep-sea diving with friends off the Virgin Islands in 1972, a man named Rodney Temple was simultaneously attacked by a pair of whitetip sharks—the smaller one was estimated to be 12 feet long. His two friends attempted to save him; one was pulled along with Temple 400 feet below sea level before losing his grip and returning to the surface. This is thought to be the deepest shark attack ever recorded.

9. Escaped convict tries swimming to freedom, gets “cut in two by a shark.”

Tasmania’s Port Arthur had a penitentiary that housed some of Australia’s most notorious convicts, which is saying something, seeing as how the entire continent was settled by convicts. One day around 1843, an escaped bushranger known only as “Owen” fled the penal settlement, dove into the ocean, and began swimming toward freedom—whereupon he was “cut in two by a shark,” according to fellow escaped convict John Connell.

10. Her husband and four kids watched as she was bitten into two pieces and devoured.

Thirty-three-year-old housewife and mother of four Shirley Ann Durdin was swimming in Australian water estimated to be only six feet deep one day in 1985 when a great white shark estimated to be twenty feet long attacked her in front of multiple witnesses. Friends restrained her husband Barry from jumping into the water and attempting to save her as he desperately screamed, “She’s gone! She’s gone!” The shark’s first bite reportedly tore Durdin into two pieces. Rescuers arrived to find her headless torso, but before they could retrieve it, the shark doubled back and swallowed that whole, too. As with Robert Pamperin, the only remaining trace of Durdin’s existence was a single swimming fin.

11. He suddenly started jerking from side to side in the water.

In what is thought to be the first documented case of a fatal great white shark attack in California history, 17-year-old Barry Wilson was killed “in front of scores of witnesses” one day in 1952 while swimming off the shore of Pacific Grove. Suddenly Wilson was observed jerking violently from side to side. Then he screamed as the shark attacked him from the front and lifted him out of the water all the way to his knees. He was dragged underwater then temporarily emerged screaming amid a pool of blood. A team of rescue workers grabbed Wilson and started taking him to shore, with the shark following the whole time. Wilson had already died by the time they reached the beach.

Ian Redmond and his wife Gemma Houghton had only been married ten days. They were honeymooning in the Seychelles in 2011 when, right before Gemma’s eyes, a six-foot shark attacked Ian while he was snorkeling a mere 20 yards from shore. His arm and leg were ripped completely off his body, and he bled to death on the beach. Only two weeks previously, a Frenchman had been killed by a shark a mere 400 yards from where Redmond was attacked, and a local tourism chief was criticized for not warning tourists about the prior attack.

13. Fisherman accidentally hooks shark, gets pulled into the water and eaten.

Gordon Hobrook was a professional deep-sea fisherman from Australia. One day in 1965 off the coast of Brisbane in an area where several sharks had been spotted, he accidentally hooked a shark whose brute strength pulled him overboard, whereupon Hobrook was eaten. Since Hobrook initially hooked the shark, the attack was classified as a “provoked” incident, which seems somewhat insensitive to his surviving family members.

Where Sharks Dwell And Illusions Begin

50 People On ‘The Scariest Place On Earth’