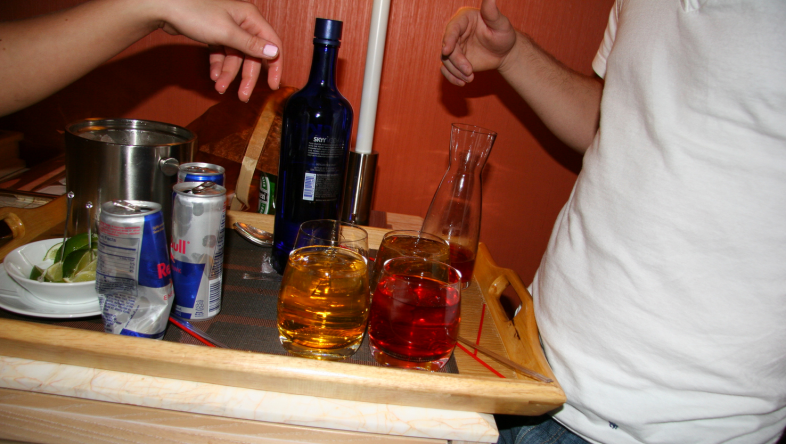 I’ve had my days of partying. Which means I’ve had those days of going over to my buddy’s, talking about how crazy the night is going to be while blasting Kygo, feeling totally amped, then eating pizza and going home.

I’ve already exhausted the subject of what happens at the bar; this article is in regards to the prelude to the bar—the infamous pre-game, which, some argue, is more essential to a night’s success than the actual ‘game’ itself. Nonetheless, in most pre-games I’ve been to, amongst different groups of friends in different cities, I’ve found that you can break down most of them into their five essential phases.

Phase One: Where is Everybody?

People haven’t been on time to a social event on a Friday or Saturday night in several years, but pre-game hosts tend to think that because its their pre-game, people should arrive promptly, because we deserve to have everything we want happen our way. In reality, despite how many times the host sends texts like: ‘Please come at 9:30, we have to leave at 10:00,’ it’s unrealistic to expect the majority of guests to show up that much before 10:00—unless they are the type of people who get sub-ten instagram likes per post.

During this twenty minute increment of tense, uneventful waiting between the invite time and guests’ arrival, the pre game host often has his or her anxiety levels surpass groundbreaking heights. They pace back and forth between their apartment’s various rooms, checking their phone every few seconds in hopes of an explanation to everybody’s blatant no-show. They may even elect to send angry text messages along the lines of ‘WTF is everybody??’ unlikely to avail a response. Entertaining thoughts about forming a new group of friends is not out of the question either.

Then, suddenly, everybody starts to show up, and the host may act a little dazzled, but he or she will be okay after a few apologies from the handful of perpetrators who made everybody late. “Don’t worry about it, bro, we’re all here, let’s just have fun,” and the host reluctantly agrees.

With the arrival of each new guest, the pre-party is overcome with boisterous mirth, drinks being filled and spilt, flirting commencing and music blasting. More than anything, though, guests are “hanging out,” which means they’re thumbing through their phones and texting at unprecedented speeds: “Is it too late to tell x y and z to come?” somebody asks, and the answer is almost always “yes, we have to leave soon,” even if there’s plenty of time.

There are a few classic characters here. Most notably, a group of ragers, who down several shots in rapid succession and dance wildly in anticipation of the crazy night to come. Poorly performed rap battles have also been known to make their appearance here, and while some might watch, most others place attention elsewhere. Conversely, there are those going about the night more conservatively, most likely your friends in a relationship, who politely decline incessant invitations to drink. “Are you not drinking, bro?” is a surefire question to be thrown their way.

The pre game is also a classic window of opportunity to run an insta post or FB status. If this is a birthday pre game we’re at, a picture with the birthday girl and a tagline of: ‘Been loving this bae since ’89’ should please the audience well enough—a plethora of heart emoji signs in the comment section being a reasonable expectation. And if you’re like me, somebody too nice to say no, you’ll probably end up being the photo taker to many of these eventual posts. The first one or two snaps aren’t too bad, but it’s a matter of fact that your initial photos will elicit the following response: “I look like shit! Can you take one more?” Or, its variation, “One more, one more, one more.”

“Let me play this really new good song!” someone, usually your friend with the worst taste in music, shouts over the current song playing that everybody seems to enjoy. I’ve come up with three suitable responses to this terrible suggestion: 1) vague silence, 2) speaking of a technological discrepancy which would make the mission too hectic for the time being, or 3) that a playlist has already been made. All three of which convey the basic message we need, which is: step the (expletive) away.

“We should leave soon,” someone says, pausing from their Insta-check. However, the first “it’s time to leave comment” is more of a vague suggestion than an astute demand to get this little party wrapped up. In fact, the initial it’s-time-to-leave often has the adverse affect: serves as inspiration for many to step up their game to the next level before time’s up.

Others may repeat the Let’s-leave sentiment, but it takes about fifteen minutes before this suggestion carries any weight. Afterwards, it’s fair to expect seven minutes of contentious back and forth in regards to whose turn it is to order a cab, two minutes until somebody mentions the existence of Uber Split and/or Venmo. Finally, there’s a frustrating ten minute exchange with the Uber driver, who for some reason is parked four blocks away, and can’t figure out where you’re going. In sum, the initial “Let’s go” comment means you have thirty minutes.