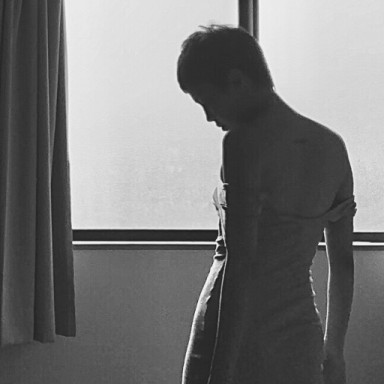 It is a cliche, I know. I’ve said this so many times to people I’ve met that it’s gradually lost its meaning. It’s become something I feel like I have to say after every conversation with someone I talk to for the first time,

It’s not like I didn’t entirely mean it, because more often than not I probably still did. But the moment I am left alone with my thoughts, I start fixating about every detail, every word, every reaction and interjection. And I always end up convinced that I’d fucked it up.

The thing is, I clicked with those people because I had to make sure we would. I would always make it appear like I am this happy-go-lucky ray of sunshine who’s always so chill and who never care what other people think, when in reality, I was always filled with worry that I might’ve said the wrong things. I’d always make it seem like I didn’t give a shit if people would like me or not, but the truth is I wanted people to like me—probably more than I was supposed to. I wanted to at the very least think that they would, that I made so much sense in the conversation that they all would think I was worth spending time with. So, I’d go the extra mile trying to come up with ideas for a good, sensible conversation just so we’d click.

And I’d go home at the end of the day and I’d stay up all night trying to go back to those moments, beating myself up for the things I said that I believed were stupid, worried they might have seen right through me—the person so thirsty for validation that she’d go out of her way to get it, coming up with a better response to those healthy debates that were long gone and over.

The thing is, I clicked with those people because I made sure I would.

But ours? Ours was different. There wasn’t any forced conversation. They all just happened. You sat there beside me and it was as if we’d known each other our whole goddamn lives. We talked so much we lost track of time. We sat there all night, talking about our own little stories over cigarettes and booze. We argued about so many things, only to realize we basically had the same fucked-up minds. We showed each other a glimpse of ourselves from a free-flowing exchange so thought-provoking that it blew my mind. We talked about bits and pieces of everything—unfiltered. We challenged, and we were challenged, and nobody backed down. Yet for the first time, I didn’t ask myself if I fucked it up. For the first time, I went home at the end of the day, not in the slightest bit bothered whether I said too much or whether I showed too much of my vulnerability, because there wasn’t an ounce of judgment. For the first time, I said what I really meant to say, not what I thought you’d want to hear.

And that was the first time I knew I meant it when I said we clicked.

I’m Not Surprised People Leave, What Shocks Me More Are The Ones Who Stay

We Didn’t Make It But Our Love Was Real