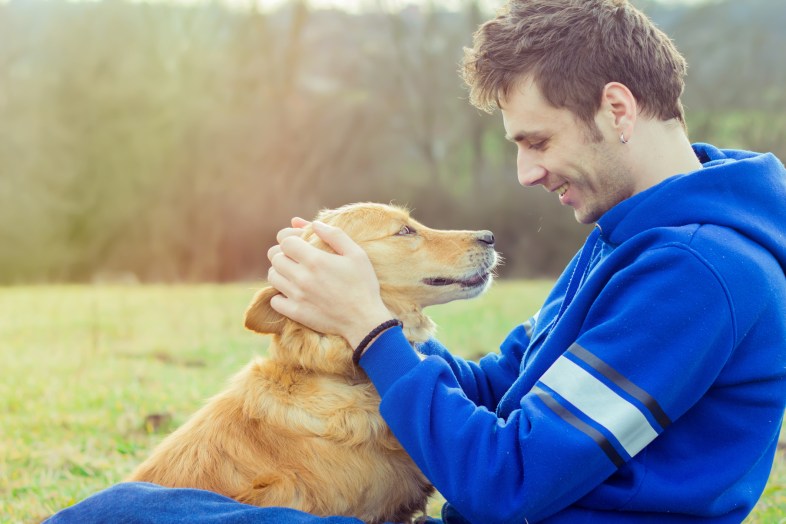 Imagine living without your eyes. It’s impossible to really imagine it, but you just know in your guts it’d be horrifying, right? Well, I’m blind, and I imagine it’d be horrifying if I didn’t have my service dog. Before I got Lucy, I was afraid to step outside. But she’s like a little magical bridge between me and the sighted world. Remember in Wizard of Oz when everything goes from black and white to color? Well, that’s what happened to my life when I got this dog. Suddenly life had so many more options and opportunities. Suddenly it felt like I could fly. Suddenly I had a set of eyes that worked.
—Edwin, 37

I’m a single mom with three kids, and we all live in a neighborhood that’s becoming increasingly sketchy. When I got divorced a year ago, I trotted down to the local animal shelter and adopted a 90-pound Rottweiler girl that protects me and the kids.
—Anna, 31

When I cry, he comforts me. When I put on ten pounds he doesn’t say a thing. When I snore he can’t hear because he’s snoring even louder. Except for the snoring, what man does any of those things? In short, life without my dog would be like life with a boyfriend but no dog—miserable. I’d call her man’s best friend, but that’d be sexist and plus I’m not a man, anyway.
—Jess, 26

Autumn is my favorite time of year, and there’s a beautiful stretch of country road right near my house where you can see the leaves changing color. On a crisp day like today walking along that road it’s like a kaleidoscope of colors—I can see green, orange, yellow, and brown leaves under a blue sky. But the immense pleasure of walking down that road would be severely diminished if tagging along by my side wasn’t the shiny coat of my Black Labrador named Fisher. He’s the most important color of my rainbow. So life without him would lack a primary color for me.
—Jessica, 24

The first thing that sprang to mind was that if I didn’t have my dog, I’d be able to eat every meal in total peace, without his little tail-wagging, hip-shimmying butt constantly nagging me for scraps. I guess that’d be nice—except I’d miss my dog so much I wouldn’t be able to eat.
—Ashley, 25

Life without my dog? I can imagine coming home to a silence so noticeable, it’d be deafening. I’m an introvert who has a daytime office job, and the best part of every day is coming home to have my dog basically laminate my face with slobbery kisses. Opening my apartment door with no dog inside would be like opening a Christmas present, only to realize it’s an empty box.
—Geoff, 27

I got her when she was a three-pound puppy, and I can’t think of one day I’ve had my six-year-old female poodle mix that she hasn’t done something to make me laugh. So a world without her would be like a world without laughter. No one greets you better than a dog. No one is more excited to see you. They are nature’s antidepressant. There’s a reason why, when you type in “why i love my d” on Google, it autofills “dog” even before “daughter” or “dad.”
—Sarah, 25

Two years ago I was camping with my dog and girlfriend in the summertime out in the Jersey Pine Barrens, which is a huge desolate and almost uninhabited patch of land in the nation’s most densely populated state. Suddenly, for no apparent reason, my sweet little 25-pound French Bulldog named Fifi started wheezing desperately as if she’d been stabbed in the lungs with an icepick. I was at least an hour’s drive from any vet, but I motored through those barren roads at 80MPH, cursing a God I didn’t believe in while praying at the same time not to kill my little dog, that dog who is, and was, and always will be my whole world. Life without my dog? I’ve imagined it—it would be horrible.
—Jim, 33

I guess I can imagine life without my dog—it’d be just like my regular life, only after some cruel special-effects technician CGI’d my most beloved companion out of every scene. Whether sleeping, eating, walking, or watching TV, there’d be a big vacant hole where my dog used to be. Sounds like a horror movie!
—Ted, 26

When I think of life without my dog, I think back to the lyrics of an old country song:
Imagine a world where no music was playing
Then think of a church where nobody’s praying
If you’ve ever looked up at a sky with no blue
Then you’ve seen a picture of me without you…
That’s what I imagine life without my little fur ball would be. It’d be like a morning without coffee or like a bed without a pillow. Like a day without sunshine or a lake without water. It’d be life, but I can’t quite say it’d be living.
—Billy, 43

Did you ever reach across the bed seeking someone to cuddle and find that there’s only a pillow there? Isn’t that the loneliest feeling in the world? I don’t care that my Great Dane weighs almost as much as I do, nor that he hogs the bed and the sheets. What I care about is that when I reach across the bed, I can feel him comfortably asleep. And as long as he’s there, I’ll never feel lonely.
—Andy, 24

Eighteen months ago I was diagnosed with liver cancer and given only a year to live. Living with cancer and the chemo and all the tests and the treatments and the not knowing and the sadness, I don’t know how much of my life I have left, but I can’t imagine a day of this agony without my scruffy little mutt by my side wherever I go. What I really worry about is how her life will be when I’m gone. Sometimes I like to think she’s immortal, and I remind myself that “dog” spelled backwards is “God.”
—Bess, 42

I have a fat little brown 13-year-old Chihuahua girl I named Teeny. A homeless couple sold her to me outside a Cracker Barrel restaurant if I agreed to buy them dinner there. The fact that they were willing to sell this goofy little angel in exchange for a meal says to me how horribly destitute their lives were that evening. I could tell they loved her, and part of me feels guilty that I have her. But she brings me so much joy that when I try to imagine life without her, I imagine how that poor couple feels every day and night.
—Johnny, 29

Who would wake me up in the morning? Who would greet me when I get home? Who would walk with me at the park? Who would eat the last bite of every meal I eat? Who would bark when there’s a weird scratching sound on the roof? Who would catch the mice in the basement? Why did you ask me this question—are you trying to upset me?
—Kirsten, 24