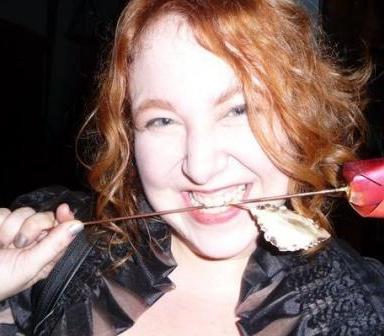 I had a brief shock when I got my first senior-year philosophy paper back with a B+ on the cover. Granted, I had a perilous crush on the professor, and it was hard to type when I couldn’t see through all the little hearts coming out of my eyes. But I’d talked it through with him in office hours, and I thought he’d been impressed. I thought we’d made a connection.

Then I flipped past the cover. Page 1 had more of his drunk-chicken handwriting: “Just kidding. I can’t believe you fell for that. Of course this is an A+.” Wait a minute, was this guy flirting? Through grades?

What could he have wanted from me? Manic Panic hair, a fat belly and a lousy attitude are not exactly the classic accoutrements of the professor-seducing Lolita coed. But maybe he liked my outsider looks and posturing; they signaled that I wasn’t like the others, or else they just advertised my prickly vulnerability, how easy I was to take advantage of. Maybe he just responded to the habitual cut of my necklines (low).

Whatever it was—whether he was interested, or lonely, or just wanted to see how much he could get from the bargain—when I got up the nerve to invite him to my weekly poker night, he said yes. He must have guessed that accepting meant I’d be having some intense staring contests with his pants, but he still showed up, and hung out and kept coming.

Then we exchanged email addresses and AIM handles (shut up, it was 2001). Then we started making study dates during the day. Then I started accompanying him on shopping trips, helping him pick out cookware and clothes.

It was on one of those – he needed a winter coat – that I decided to ask him if my crush was really obvious. (Spoiler: IT WAS.) He sighed, and I was sure I’d wrecked everything; we’d been having such a good time flirting, and now I’d put him in a position where the only right thing to do was the thing that would destroy me.

Luckily, he wasn’t interested in doing the right thing.

“Look, you’re very cute,” he said instead. “And I find you very interesting, physically and mentally. But you are my student.”

“Oh,” I said, “well, that’s not forever.” And then we went back to his place, and that was the last we said for a long time about it maybe not being okay.

I tried fumblingly to blend in with the kids in class, as though I were just another student. I joked about his clothes with my classmates, and feigned curiosity when they tried to guess how old he was. “You guys would make a cute couple,” teased a girl from his epistemology course. “Haha, yeah right,” I said, and rolled my eyes.

Outside the classroom, we took long walks or sat and worked in coffee shops—him grading, me reading assignments for his class. But we were only really comfortable in his apartment (or, at one point, in a hotel room in New York). The school wasn’t one of those insular universities where everyone stayed on campus; the city was riddled with students, and he lived in a popular neighborhood.

And while the college had no rules against what we were doing, he did: no public affection, no committing to anything, no tipping off our friends, impeccable grades so nobody could complain. When we took walks, I wasn’t supposed to touch him. In cafes, we did not kiss.

Part of me thought things would change when I graduated—if nothing else, that he’d at least acknowledge me in public. But by June, I was starting to understand that I would always be his pupil, and furthermore, that my A+ days had passed.

And when it came to not burdening him with my feelings, I was on academic probation.

One day, I ran into him while he was out with another instructor. I grinned awkwardly and waved, wondering if I should mention that I’d been about to call him. He nodded and walked by.

“Student?” I heard his colleague ask. “Yes,” he said. I was stung—I’d graduated years ago. Why wouldn’t he at least say I was a friend? But the truth is, he wasn’t really wrong.

I’d like this to have the sort of ending where I reconsider my priorities, rediscover my self-worth, and walk away. I did try to break it off a few times, but he always convinced me that the real problem was me: my lack of control, my ingratitude, my generally warped understanding of the world and him and myself. I believed in his authority, and he’d convinced me I couldn’t be trusted, so who was I to say it wasn’t true?

I’d spent years in Jess Is a Disobedient Out-of-Control Basket Case 101, which he taught, in the department of Pleasing Him Studies, where he was dean. Trying to convince me that I deserved better was like taking a math major aside and saying, “Hey, you know that trigonometry thing? Forget that.” Without my belief in his version of me, my ideology fell apart.

In the end, I didn’t have to figure out how to walk away. He took a job at another university in another country on the other side of the world, and once he was gone he shut me out. Part of me desperately wanted him to talk to me again, but in his absence, I started studying other lessons too: about feminism, about surviving abuse, about what a certain kind of man can do when he has a little power.

Because what he’d been doing to me wasn’t a new trick. Powerful men—and not just the men, but the society they’re somehow still in charge of—have been on to this bad-teacher jam for a while. After all, if you can talk people into oppressing themselves, it saves you all the work of doing the subjugation for them.

And what better way to get someone to do that for you than to convince her that her view of reality is damaged, and your view – the one where she deserves mistreatment – is the objectively correct one?

It sucks to have someone you love offer you a reality like that. But it’s just the concentrated version of living in a culture that tells women they’re worthless, then mocks their low self-esteem.

When you’ve been out of college for as long as I have (10 years!), you don’t remember the facts you studied so much as the general concepts, the way the scope of your worldview was defined by what you learned. A great teacher will shift your perspective and transform your thinking. And he was a great teacher—which means that unlearning the self-doubt he taught me has taken me longer than college and grad school combined. If I ever get finished, someone should give me a Ph.D. in Head-Unfucking.

Then I could turn around and teach it to some undergrads. And yes, that is all I would do with them.

I'm Jess, and I put words in order for money, and also sometimes for free. I've been described as "a ...