Skip to content
By Jerome London Updated February 3, 2021
Mary Mallon was an Irish cook who emigrated to the USA and began cooking for wealthy families. Over the course of her employment, despite the fact that she appeared perfectly healthy, she would spread the bacterium that causes typhoid fever to dozens and possibly thousands of people, killing at least three and possibly more than fifty. The nickname the press gave her—”Typhoid Mary”—would become a metaphor for anyone who knowingly spreads disease or suffering.
By Jerome London Updated February 3, 2021

Mary Mallon was born in 1869 in County Tyrone, Ireland, one of the poorest parts of that perennially impoverished nation. She emigrated to the USA in 1883 or 1884 and lived with her aunt and uncle before finding a job as a cook for wealthy American families in the New York City area.

At the time, typhoid fever—caused by the bacterium Salmonella typhi—was fatal in 10% of cases, but it was mostly confined to very poor areas where conditions were overcrowded and unsanitary. Medical doctors had no concept of the “healthy carrier” at the time—i.e., anyone who was infected with a bacterium was expected to show symptoms of the disease. Mary Mallon would change all that.

From 1900 to 1907, Mary would work for eight wealthy families in the NYC area, seven of whose members would come down with typhoid fever. Her usual pattern was to leave the family once someone got sick, so she became hard to trace and it was difficult to associate her with these outbreaks.

While Mallon was working as a cook in 1906 for a wealthy banker named Charles Henry Warren at a summer beach house in Oyster Bay, Long Island, six of the 11 people residing in the house came down with typhoid fever.

The Warren family hired a sanitary engineer named George Soper to investigate their outbreak of typhoid fever. While initially suspecting that raw clams were the culprit, Soper focused his attention on Mary Mallon and discovered that seven of the eight families she’d worked for came down with typhoid fever as well. He estimated that Mallon had caused at least 22 infections—and possibly as many as 3,000—and that few of those victims had died. Soper published his report in the June 1907 edition of the Journal of American Medicine. He wrote:

It was found that the family changed cooks on August 4. This was about three weeks before the typhoid epidemic broke out. The new cook, Mallon, remained in the family only a short time, and left about three weeks after the outbreak occurred. Mallon was described as an Irish woman about 40 years of age, tall, heavy, single. She seemed to be in perfect health.

It was thought that Mallon’s most likely method of transmission of typhoid fever was via cutting up raw peaches to serve with ice cream, as any food cooked at a high temperature would likely have been killed by the heat.

Soper discovered that in March 1907, there was an outbreak of typhoid fever at a Park Avenue penthouse. When he learned that Mallon was the cook, he confronted her and asked for feces and urine samples. According to Soper, Mallon was not pleased with the request:

I had my first talk with Mary in the kitchen of this house. I was as diplomatic as possible, but I had to say I suspected her of making people sick and that I wanted specimens of her urine, faeces and blood. It did not take Mary long to react to this suggestion. She seized a carving fork and advanced in my direction. I passed rapidly down the long narrow hall, through the tall iron gate, and so to the sidewalk. I felt rather lucky to escape.

After retreating, Soper engaged the help of the New York City police and Dr. Josephine Baker, who describes Mary’s reaction after police arrested her:

She came out fighting and swearing, both of which she could do with appalling efficiency and vigor…. The policemen lifted her into the ambulance and I literally sat on her all the way to the hospital; it was like being in a cage with an angry lion.

Mallon was forced to give a stool sample, which revealed that she was a carrier of Salmonella typhi. Since there wouldn’t be a vaccine for typhoid fever until 1911, authorities decided that Mary Mallon should be quarantined so that she couldn’t infect and kill anyone else. In 1907 she was sent to Riverside Hospital on North Brother Island, which was located off the shoreline of the Bronx. 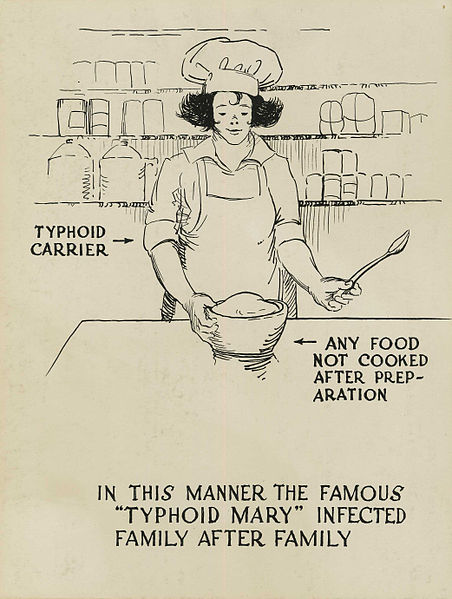 In 1907 the San Jose Evening News published an article on Mary that contained the following passage:

The case is without parallel in medical records. Never has there been an instance, as the present, where a woman who never had typhoid fever should prove a veritable germ factory.

Mary would remain quarantined until 1910. During that time, 120 of 163 stool samples revealed she was a carrier of Salmonella typhi. In 1908 her case had led to so much publicity that the press was calling her “Typhoid Mary.” Even two separate entries in medical journals used the infamous “Typhoid Mary” nickname.

During this period of confinement, Mallon still protested her innocence and insisted she was a healthy woman who was being persecuted for being Irish and poor. When doctors promised to release her if they allowed them to remove her gallbladder—which is where they suspected the Salmonella typhi bacterium resided—she angrily refused.

In 1910 a new NYC health commissioner freed Mary from her confinement on the condition that she never work as a cook again. Mary agreed to these terms, and for a few years she toiled as a laundress.

However, Mary’s new job wasn’t nearly as lucrative as being a cook for the wealthy, so she used the name “Mary Brown” and began cooking again. While working at Sloane Maternity in Manhattan, 25 doctors, nurses, and staff members were infected with typhoid fever, two of whom died.

Police finally located Mary and once again shipped her off to a lonely era of confinement on North Brother Island, where she would reside for the next twenty-three years until her death.

On Christmas morning 1932, a package deliveryman discovered Mary on the floor of her bungalow, paralyzed. She had suffered a stroke and would never walk again. She finally died in 1938. An autopsy revealed that her gallbladder did indeed contain Salmonella typhi bacteria.

The term “Typhoid Mary” entered the popular lexicon as a metaphor for anyone who willfully spread disease and/or malice.

It is thought that at least three people died from infections due to Mallon—but possibly as many as 51.

Mallon was not the only “healthy carrier” of typhoid fever during this era, but she was certainly the most famous. One was an Italian immigrant named Tony Labella, who is thought to have infected at least 100 people, leading to five deaths. Another was a guide in the Adirondacks who earned the nickname “Typhoid John” and who infected around three dozen people, with two of them dying.

Some claim that Mallon was a victim of a cruel and unforgiving medical condition. Others point out that Mallon repeatedly disobeyed orders to stop cooking for people and therefore left sickness and death wherever she went.