We’ve collected 17 stories from the web and anonymous interviews with men about the sexy feet craze. Here’s what a large sample of different men said about why they find feet so sexy.

1. One day he just wanted to suck on toes: “In school I noticed my GF had nice feet and I just wanted to suck on her toes. Now its got to the point where it can be a dealbreaker; I wouldn’t date a girl that had feet that I don’t find attractive. I consider my fetish to be mild, I just like to suck on a girl’s toes/massage their feet as part of foreplay (and it must be clean).” 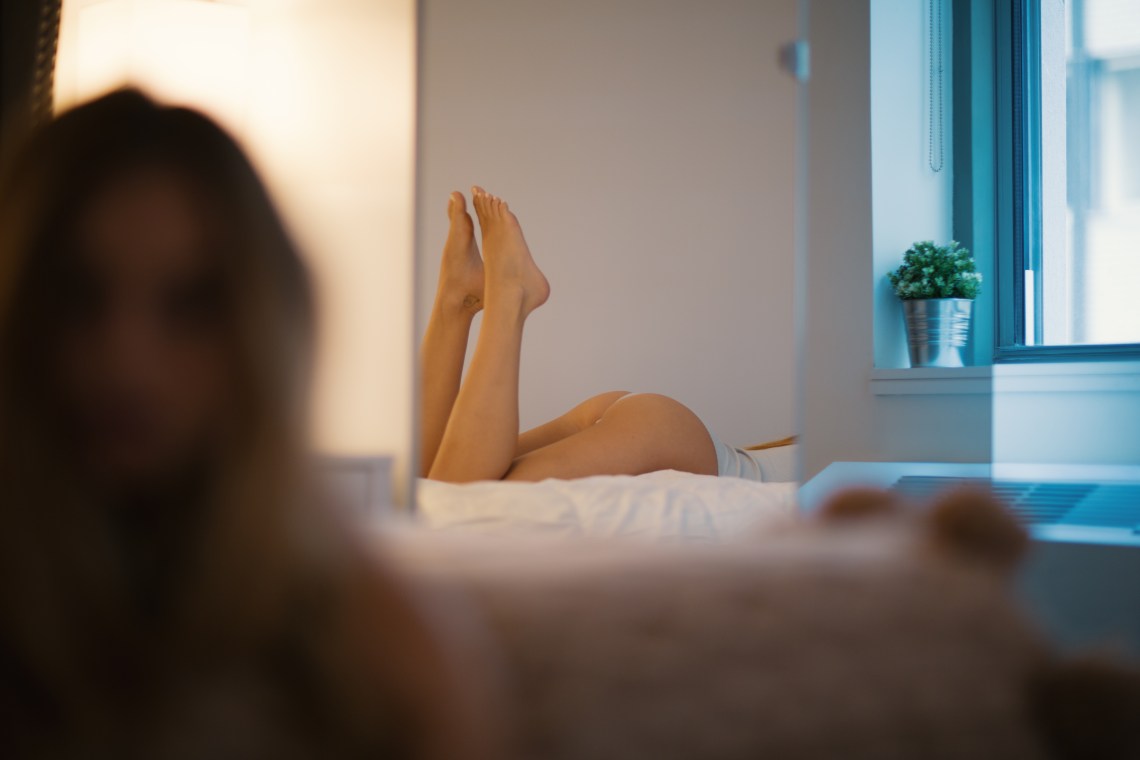 2. Women spend a lot of time making their feet beautiful, so of course we like them: “If you think about it women do a lot of things to decorate their feet, whether on purpose or on accident to accentuate something else. They paint their nails, wear toe rings, put on high heeled shoes, wear stockings, wear open toed heels, put on toe rings, show off their entire foot when they wear flip flops, wear ankle bracelets. There’s so many things going on there and so many things for the mind, which is the biggest sex organ, to grab on to. It’s almost amazing to me that anybody is surprised that it’s fetishized. Also, feet are an extension of the legs, which are also sexy as hell.”

3. They are an extension of the legs, which are also sexy as hell: “If you think about it women do a lot of things to decorate their feet, whether on purpose or on accident to accentuate something else. They paint their nails, wear toe rings, put on high heeled shoes, wear stockings, wear open toed heels, put on toe rings, show off their entire foot when they wear flip flops, wear ankle bracelets. There’s so many things going on there and so many things for the mind, which is the biggest sex organ, to grab on to. It’s almost amazing to me that anybody is surprised that it’s fetishized.

Also, feet are an extension of the legs, which are also sexy as hell.”

5. It’s hard to maintain control in the summer, when all the feet are out: “The second hardest part of having a foot fetish is summer. Everyone loves summer, especially me. What other time is it acceptable for women to wear flip-flops everyday? This is great for guys like me, right? Wrong! I love looking at feet. It’s the same as looking at nice breasts. Can you imagine if girls walked around shirtless all the time? Sure, it would be awesome, but it would make it harder to focus. Sometimes, I zone out in class staring at a girl’s feet in front of the classroom. It’s a major distraction, and it’s easier for me to become aroused in public. I’m always scared that some girl will notice and judge me.”

7. I’m embarrassed by how much women’s feet turn me on: “For as long as I can remember, I’ve had an infatuation with women’s bare feet. I love giving girls foot rubs and kissing and sucking on their (clean!) toes, and a foot job turns me on more than a hand job. However, this fetish — along with others, I’m sure — has a stigma. I understand why. I myself am just as repulsed by a pair of sweaty, dirty feet as anyone else (although not all those with foot fetishes are), but I’m turned on by a woman with a nice pedicure. I find myself ashamed and embarrassed about how much women’s feet turn me on.”

8. A nice pair of feet can make up for many other shortcomings: “You don’t just look at the usual things when looking at a girl – boobs, figure, face, ass, etc. – but you also want to see her feet, perhaps more than any of the aforementioned body parts. A nice pair of feet may even compensate for any shortcomings about her look. You get so much pleasure from something not sexually related.”

10. Not only do I love ‘em, I love ‘em stinky: “I love every part of the female anatomy, but I can never get enough of their stinky feet. And I feel so left out. I will not settle for anything less. So if I meet a woman who has a problem sharing her feet with me, then I lose interest and feel she’s immature and not understanding of her partner’s needs.”

11. Feet are an elegant work of art: “The elegance of a beautiful pair of feet tantalizes, turns me into a starving Pavlovian dog raised on a diet of smooth soles with a pinkish hue and long, pedicured toes.”

12. Feet are a masterpiece of human architecture: “Feet are like a box of chocolates replaced with snowflakes. No two pairs are alike, and every set exudes intricate details, oozing character and personality. A dainty, soft and smooth, slender and sleek, curvaceous masterpiece of human architecture that makes me melt like a Dali clock, that’s what beautiful feet are to me.”

13. I think it started with a Ninja Turtles movie when the villain tickled April’s feet: “The only thing I can trace it back to was watching Ninja Turtles as a kid waaaaaaay back. Me and the girl that lived across the street watched the episode with that villain that tickled April’s feet to get something out of her. Later we were playing and we decided to reenact that bit.”

14. I first noticed it in PE class: “I first discovered my foot fetish in 9th grade, when during P.E. class my male classmates were all changing clothes and for some reason i started noticing their feet. It gave me an erection, which weirded me out at first. Feet didn’t feel like something i should be sexually aroused by at the time. But i learned to embrace it by 10th grade, and would even hid in the stalls while i watched my classmates walk around the changing room in their bare feet.”

15. I realized I had the fetish when I was 12 and wrestling with a female neighbor: “For the longest time I’ve loved feet. As far back as I can remember, I’d look at feet and find myself getting aroused by just the sight of them. I remember being young, about 12 or so, and play wrestling with the neighbor, she was super cute with nice feet, her feet would somehow always end up by my head. I think this was the first time I really came to grasps that I had a foot fetish.”

17. As long as the feet aren’t in high heels, I love ‘em: “Foot fetish+ … But I dislike high heels. If a girl wears them it will decrease my liking. My foot fetish only works if the target wears sandals, slippers, boots, socks or is barefoot. The appropriate footwear can enhance it or do the opposite.”

SEXY FEET: WHAT DO THE EXPERTS SAY? 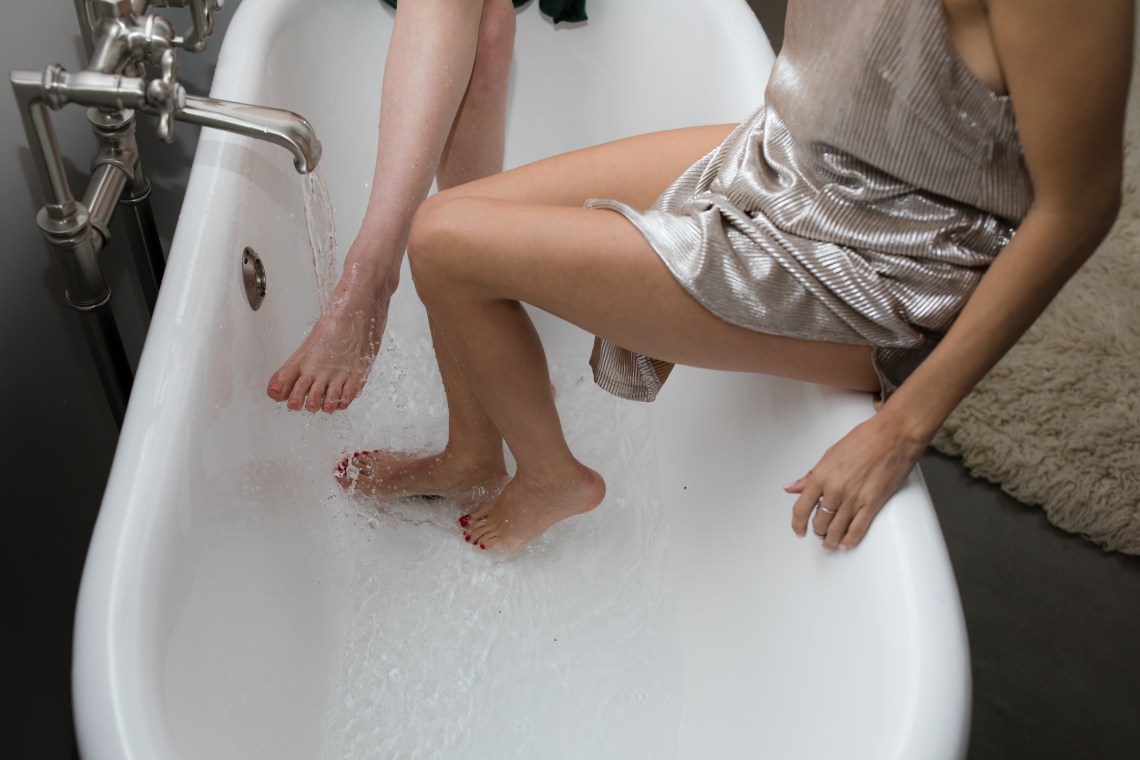 As far as expert opinions on foot fetishes, there are a variety of theories.

For most people, feet are made for walking, not for fucking, so they might find a sexual attraction to feet mystifying and maybe even a little weird. So where does this fetish originate?

Sigmund Freud thought that foot fetishes were based in the fact that feet resembled penises. I’m not exactly sure what kind of feet (or penises) Freud was looking at, but that’s a strange and unconvincing theory.

According to a 2006 study, the most common of all fetishes related to body parts involve feet and toes. (Attraction to boobs, butts, and genitals don’t count because this is nearly universal and thus isn’t classified as a fetish.) Although women occasionally have foot fetishes, it is overwhelmingly a guy thing. Sex expert Colleen Singer defines the fetish thusly:

Foot fetishism, also referred to as podophilia, is a heightened and specific sexual interest in feet and/or footwear. It is the most common form of sexual fetishism for otherwise non-sexual objects or body parts, and is more prevalent in men than women.

A neurologist named  Vilayanur S. Ramachandran speculated that the feet and genitals occupy similar areas in the brain’s somatosensory cortex, which may help to explain why some people become sexually stimulated at the thought of feet. Ramachandran even observed that some amputees have reported feeling orgasms in their feet! Sociobiologist Desmond Morris speculated that foot fetishism arose from some sort of traumatic imprinting event at an early age involving feet.

Sexy Feet: HOW DOES THE FETISH START?

Many adults with foot fetishes trace their fixation back to a childhood event such as being tickled in their feet during horseplay, some dim distant memory where they simultaneously felt trapped and stimulated. Others speculate that feet, just like genitals and breasts, can attain an allure simply because they’re almost always hidden. According to a Reddit user:

Like butts and genitals, they are rarely displayed openly; even if someone is wearing sandals or barefoot, they’re still standing on their soles, so they’re just not seen as frequently as other body parts. This makes them almost as much of a ‘private’ part.

Another foot fetishist tells Cosmopolitan that around age 15 or 16:

I just realized that instead of the standard boobs and bums, I was obsessed with staring at women’s feet and toes, imagining them in my mouth or rubbing them on my face….I love nice arches, red nail varnish, flip-flops, nicely pedicured, slender but not too thin, just an all-round well-proportioned foot. Generally I like fresh-smelling feet, although I have been known to lick grimy feet in the past to offset the beauty.

Although safe if practiced within commonly accepted boundaries, the fetish does not always express itself in a benign manner, as in the case of serial killer Jerome Brudos, who developed an affinity for women’s shoes at the age of five and wound up severing the feet of his female murder victims. Oregon seems to be a hotspot for taking foot fetishes too far, as it also was the home of serial killer Leroy Dayton Rogers, who “had a penchant for sawing off his victims’ feet.” And back in 2011, Arkansas police arrested a man identified as the “Toe Suck Fairy,” known for approaching women in stores, complimenting their feet, and asking to suck their toes.

But just like all kinks, foot fetishism need not get extreme or abusive. If you learn to manage your kink with an understanding partner, you’d realize there’s a world of pleasure nuzzled inside every warm pair of socks. You might even convince her to give you a foot job. If you find a partner who’s willing to “toe the line” like that, you’ve found a keeper!