People who voted for Trump are not bad people. It took me a while to fully grasp this, but after I was able to remove myself from the outrage and disappointment of seeing that man elected president, I am convinced of it. His voters, like Hillary’s, had a set of needs and desires that they felt one candidate would address over the other. Before you snidely comment about those needs being morally and abjectly wrong, most of these needs and desires were innocent and the same as those of the other side: they wanted a better life. More financial stability, more voice in the government, more safety, etc. Wherever you stand on how these needs and desires actually look is not as important; the fact is we all had the same basic goals in this election.

Since most of my readers are on the liberal side, get it out of your head that his voters are the enemy. They are not, but because they have been given a voice, a voice that we disagree with, it feels as so. Don’t allow him to drive that wedge between us. However, this post is not for you.

To his supporters: first of all, I am happy your voices were heard. You, as much as I and everyone else, deserve that basic democratic right as much as anyone. Your voice this time around was a little louder, and I, without reservation, concede political defeat. Many of my fellow liberals will argue tooth and nail that the system, and not the people, elected him. This is partly true, but it is a system, one that is not rigged, and for the purposes of this election, it is not worth arguing. Discussing this for future elections is respectable, but honoring the results of this one are important too, so I wish not to demean that.

But I am still worried, and not just for my side. I’m worried for you too.

Let me show you a definition, taken from the Merriam-Webster online dictionary: 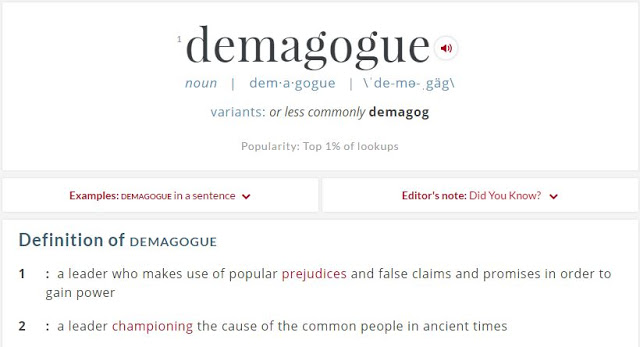 When I first read this I was shocked at how accurate I felt it described our newest president. I refer mainly to the first definition, but the second, to a certain extent, also is accurate. Trump did indeed champion a cause of the common people, or at least a select part of them, and through the promises of reinvigorating the coal industry, of blocking immigrants from taking jobs, and other causes held closely by many of his supporters. But these are not ancient times, and the second definition holds him in a falsely positive light.

The first definition, however, seems nearly impossible to ignore as a descriptor of Trump. Let’s break it down.

One example of a popular prejudice he capitalized on is that Mexican immigrants are bad people. They’re racist, they’re criminals, they’re bad people altogether.

Do you know a Mexican immigrant? If you do, odds are they are a decent person. Odds are they are similar to you. My 86 year old retired grandfather, an ex-Korean War vet, found this out when Mexican waitress Maria starting waiting on him daily. He knows she’s a good person, even though he once had very different ideas. If he can change his mind once he really pays attention, so can you.

This is just one example, but it was used a rallying cry for people who have suffered job loss and needed somewhere to point the finger. So when Trump pointed the finger at Mexicans, he coaxed many others who were suffering to do the same. It is easy to place blame, especially when the shaky promise of a solution comes attached. It is the same case with the Muslim ban; there is violence in the country, and it is easier to make an enemy out a foreign misunderstood one than really analyze the problem.

False claims and promises. This one may be harder to convince you of because it seems that so far the president is following through on all that he promised. In his first week, he has fulfilled much of what he swore to do on his campaign, so my claims of them being false seem like liberal bull, but I want to remind you how early it is. It is just the second week, and he has brilliantly followed through at his first chance to seemingly solidify the idea that he is the champion of his supporters. But I repeat: it is the first week. All of those promises won’t be fulfilled.

For example, the Wall. There is no indication that Mexico has any intention of paying like Trump had been so certain they would do. I don’t see it happening, but if you choose to ignore my doubt, I understand. Perhaps he would get them to pay through tariffs, but not without us paying in return.

And The Ban? Federal court judges are already disagreeing with one of his first major decisions. He seems to have made promises that he wasn’t aware he wouldn’t be able to keep.

And what about other promises that he only half-fulfills, yet hails as victories. Like when he said that Carrier in Indiana kept jobs in the States when the company planned on moving them to Mexico? Well, some of those jobs were kept in the States, that is true. But it is also a partial truth, and over 1300 jobs were sent abroad. And when this surfaced? The company was attacked for telling the truth.

And on the backs of those two strategies, he completed the definition and gained power.

What is most troubling to me, though especially for his supporters, is his attempt to cut you off from critical thinking. He shamelessly used your needs as a platform, a billionaire womanizer who has much less in common with you than a struggling Mexican immigrant or a blue-collar Black man, and claimed camaraderie. Along the way, he honed in on your needs and discredited anything that diverted from them. News reports that were not convenient to his cause were deemed fake, esteemed scientists’ reports were treated as embellishments. He even denounced the CIA because they presented evidence against someone Trump inexplicably wants an alliance with. He literally discredited the government’s most trusted intelligence agencies when they accused a historical enemy. What grounds did he have for that?

But again, I return to his refusal to allow you to think. He demonized the media, both partisan sources and neutral ones, for presenting facts. He has even miraculously undermined the definition of “fact.” He has painted a caricature of science as well. Why? Because he’s afraid of what that information would do to those who got him to where he is. Instead of allowing you to read the report and make an intelligent decision, he put your needs on a pedestal and claimed that the media and the science community and any other opposition were a threat to them. He has fooled you into believing unequivocally that these groups are liars because he does not trust you to make a decision for yourself. He has no respect for anyone but himself, and with time this will become more and more apparent.