For Mary Fehr, getting diagnosed with Hidradenitis Suppurativa — also known as HS — was more of a relief than anything else.

Mary was a pre-teen the first time she realized something wasn’t quite right with her skin. But at 12 or 13, it’s normal to be dealing with hormones and body changes, so she struggled quietly for many years afterwards. “I always had these small bumps on my butt and thigh area, for as long as I can remember,” she said. During college, they began appearing under her arms as well. The innocuous breakouts seemed to be spreading, and they were getting worse with time.

At that point, Mary was suffering from cysts under her arms that would get infected and leave pretty severe scarring. Given that the progression of her HS took nearly most of her young adulthood to fully materialize, she says that doctors did little in helping her get an official diagnosis.

HS is a dysfunction with sweat glands, in which lesions develop as a result of inflammation and infection. These can include smaller or larger cysts and lumps that can be extremely painful and even require draining to heal. They most commonly occur in places where skin touches each other — like under arms, or thighs. Though there are many ways to manage the condition, there’s no one single cure.

Given that HS is a pretty rare disorder (it’s estimated that only 1% of people in the U.S. suffer from it) Mary had a tough time figuring out what it was in the first place. “I had been to the dermatologist at my school and they were always kind of like, ‘Here’s a cleansing wash or antibiotics,’ and that would clear it up a bit, but not permanently,” she recalls. “It was repeatedly called cystic acne. I went to three dermatologists, and they all said the same thing.” 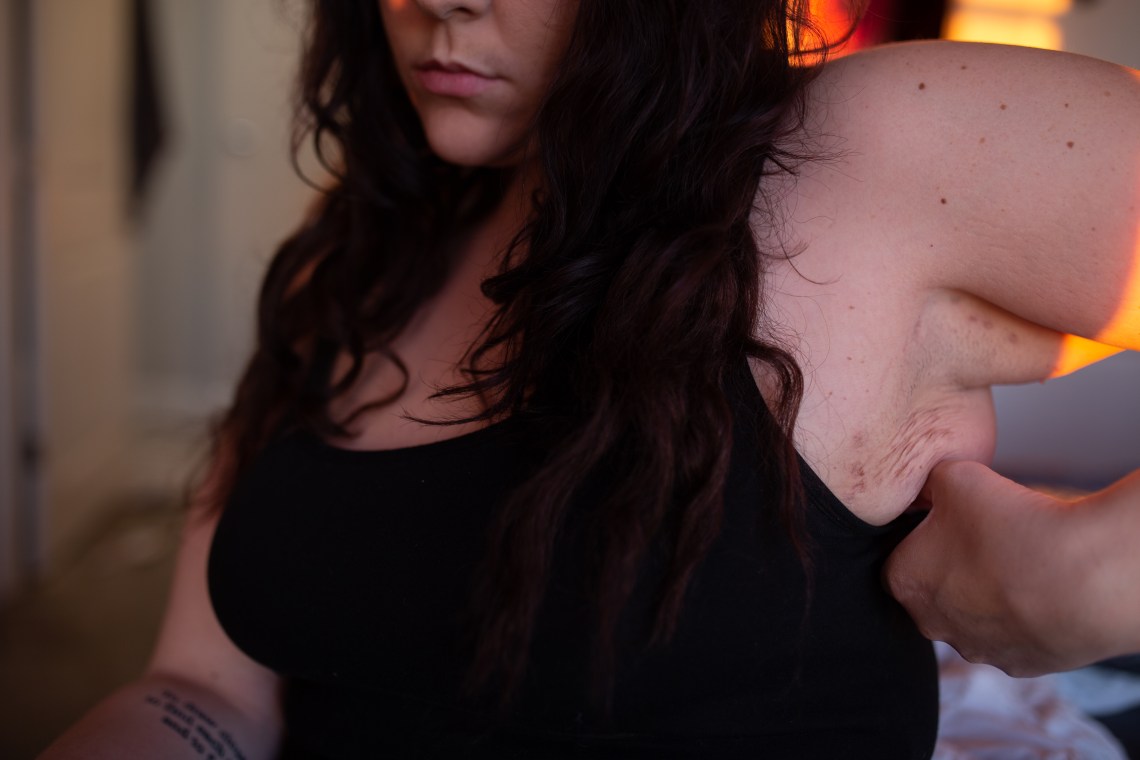 To figure out what was really going on, Mary relied on a self-diagnosis. While struggling in college — and unconvinced that she wasn’t struggling with something beyond the diagnosis of ‘cystic acne’ that she had been given — Mary says she would regularly try to put her symptoms into a search engine to see if anything would turn up. Interestingly, it wasn’t Google that lead Mary to her answer, but a Pandora ad she heard a few days later.

“It was like: ‘Do you suffer from cysts under your arms, and in your groin area?’” she remembers, joking that the timing of the ad was so uncanny she had to attribute it to some slightly unsettling realizations about how her computer was tracking her search hits and shifting the algorithm accordingly. “It was talking about it, and I was like, wow, this is a chronic skin condition,” she said about the ad. “I looked up HS for the first time, and I was like ‘This is exactly what this is.’ I had never thought of it before. I went to the dermatologist and they confirmed it.”

Aside from managing the ongoing treatment, there is, of course, the very personal aspect to dealing with a disease that is so visible.

“The really tough thing is that it’s kind of an embarrassing condition,” Mary explained. “Especially having it on your butt and thighs. It can be really embarrassing when you’re with somebody and they don’t know anything is wrong, and every time you’ll have to explain that you have this weird skin condition,” she says, “and then hope that they turn the lights off.” Though it’s uncomfortable at times, Mary says that people have generally been really receptive and understanding when she does explain what’s going on. She noted that the most common questions are whether or not she’s dealing with acne (nope) and whether or not the condition is contagious (nope, again). 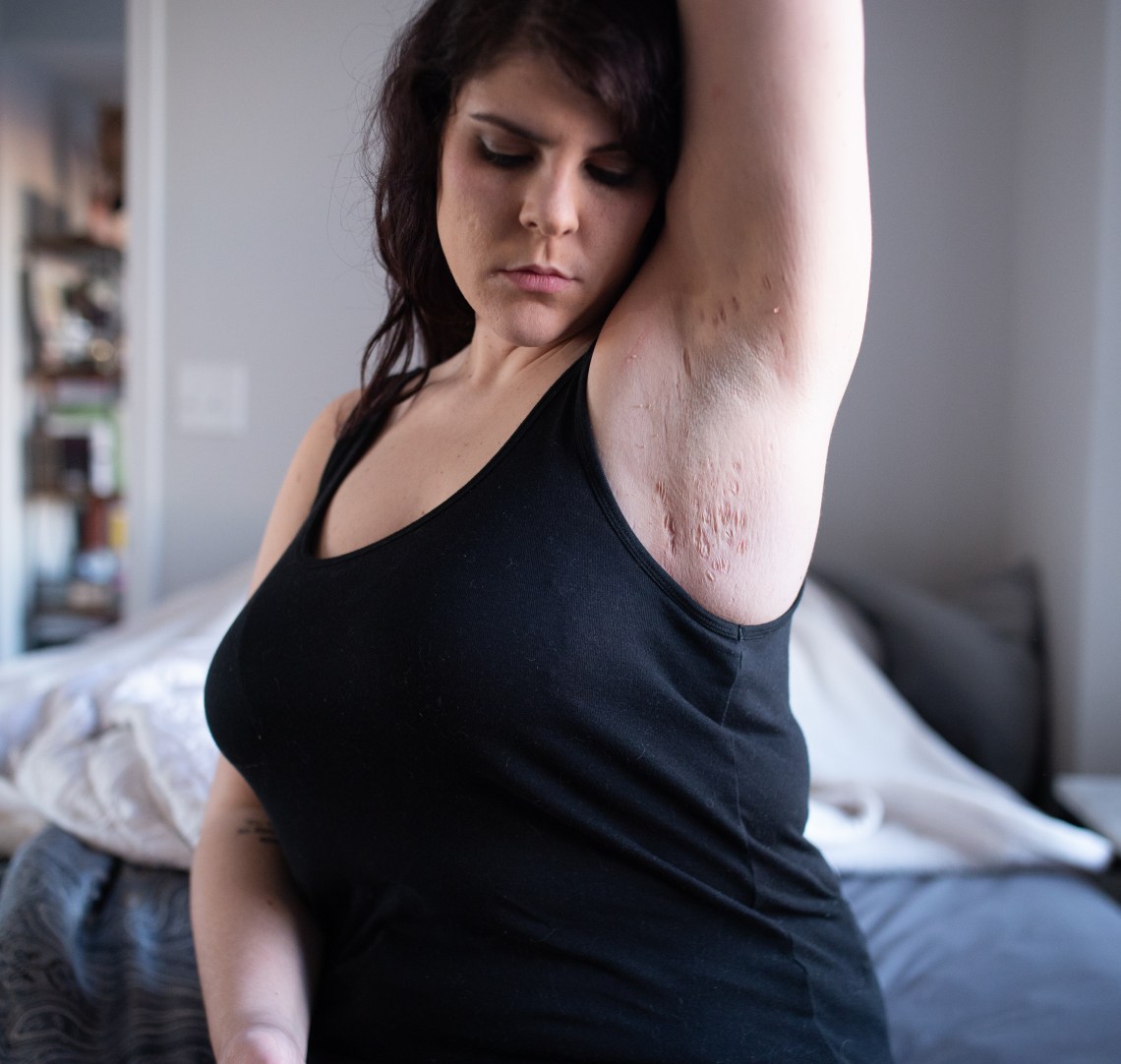 As a photographer by trade, Mary says that certain parts of her body are exposed pretty regularly, which means that she tends to choose clothing that covers her so that she doesn’t have to explain everything while working.

Despite that, Mary says HS really overall isn’t that bad, except for the occasional painful cyst. (She says this is especially true if you have one in a place like your buttox, on which you have to sit all day, or under your arm, and it hurts to move.) What’s most important, she says, is understanding what management works for you. “The thing about HS is that it’s not really caused by any one thing in particular… for me, I have always struggled with my weight. Though that doesn’t cause it, it does contribute to its severity,” she said.

As for anyone who is struggling with HS and may or may not know it, Mary reminds us that transparency is empowering.

“I think a lot more people struggle with this than we know,” she said. “When I kind of figured out what it was, I joined some local online groups, and I made it a point to get in there and post and say, ‘Hey, I’ve struggled with this thing my whole life and I’ve never heard anything about this until now,’ and I heard many people comment and say the same, and that they thought they were the only one,” she said. “Just because people aren’t talking about it, doesn’t mean it’s not happening.”