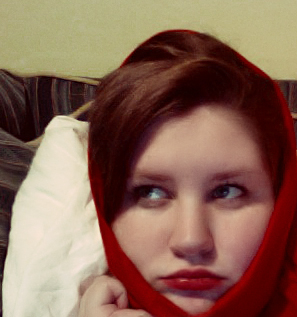 1. It’s all in the eyes: Does she have eyes? Bonus bro! Science tells us if a girl makes eye contact with you, she’s down to clown. Is she avoiding eye contact with you? Do you keep staring at her and she’s refusing to meet your gaze? No worries, eventually she’ll have to look up from her drink. She’s just being coy with you player, so keep staring. Is she rolling her eyes while talking about you to a friend? Dude! You’re in!

2. Mona Lisa Smile: She can’t help the curve of her lips when you’re around her. Is she laughing and having a good time? It’s obviously her sexual attraction to you and not the many other things that could be causing her enjoyment. Not smiling? Uh oh! Seems like you’ve got a Sylvia Plath on your hands. Make sure to keep cracking jokes to her, because it’s on. Your goal: make that fine lady smile. If she seems uncomfortable and gives a shy grin of confusion, bam. You’re in!

3. Talk, talk, talk: Is she making conversation in your general direction? Hope you’re ready for a night of unbridled passion, because she’s ca-learly into you. Hopefully she’s not one of those chatty chicks though! If honey’s mouth is flapping too much about her “mom” in the “hospital”, try to interrupt her with interesting facts about you. You’ve got to establish yourself as the dominant party in this duo, so make sure she knows you’re really not interested in anything she has to say. You’re in!

4. Touch: Did her arm “accidentally” graze yours? Mhmmm, I think you know what that means. Did she bump into you on her way to the bathroom? Uh huh. If it’s a wedding, for example, try asking her to dance. Did she say no? Try asking her 14 times until she reluctantly gives in. Once you get that yes, you know it – you’re in!

5. Flared nostrils: Is she looking at you like bull ready to charge? We’ve got a live one! Signs traditionally associated with anger, like a clenched jaw, hands made into fists, or eyes that shoot at you like daggers, actually mean something completely different in the world of love. If she’s flaring those nostrils, she’s clearly trying to take in that natural musk you’ve got going on. That’s right bro – you’re in!