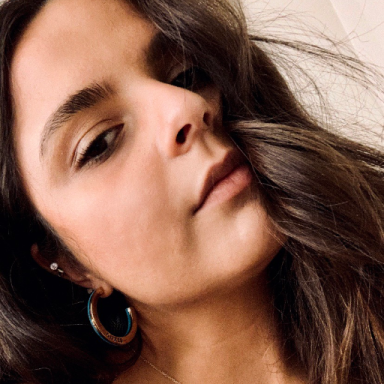 When I was a teenager, I used to melt into my sofa watching romance films. I would fantasize about the perfect love story that I would be one day be able to tell my friends about. I’d imagine the day that I would find a man who looked at me like they did in the movies, and felt like I was everything he was looking for. I’d lay in my bed pretending he was laying next to me looking deeply into my eyes with a smile on his face, and say “I can’t believe I found someone like you.”

I had this fucked up way of thinking, now that I think about it. Because are people even really like that? I mean, romance does exist, and people can be beautifully affectionate. I am married and in love after all. However, I don’t think it’s anything dramatic and amorous like “Dear John,” or “The Notebook.”

The thing is, I don’t think people actually know what they’re looking for. I think they think they have an idea of what they want, but what they want isn’t really a realistic thing. We have this mental checklist in our minds (and physical for some), and we search for the “right” person that doesn’t even exist.

“I want him to have brown hair, blue eyes, be 6’5, have broad shoulders, play the guitar, laugh at all my jokes, and be SUPER romantic. Oh! He also needs to feel his feelings, have a big heart, and it wouldn’t hurt if he was funny too. I like a good laugh.”

Sure, those things may be attainable. But what about the other things? His big heart may cause him to be too needy, his jokes might get exhausting, and he may feel his feelings, but have some sort of addiction because those feelings hurt too much sometimes. Can you handle those characteristics of him? We forget that there is always a dark side to almost everything, because perfection is non-existent.

We’ve created this facade in our society that its possible to find the perfect guy through apps and social media. You can easily swipe and find that 6’2, financially stable investor, who also models, and plays the drums. Wow, he sounds so perfect, doesn’t he? Except, he is so busy doing all those things he can’t be there for you the way you need him to physically or emotionally. And if he is there emotionally and physically, he might be too much of a bum, and too lazy. He might be a slob, lives in an revolting house, and he just doesn’t seem motivated enough for you.

And then, for some-when you’ve realized that no one is actually perfect, and you compromise for the almost “perfect man”. You realize 6 years later that you’re sick of his shit. You find out he has a serious porn problem, he can’t have kids, and you discover that his love for playing drums in his studio is actually really annoying and you’re over it. You’re miserable! So you think, “hmmm, might there be someone better out there for me?” Everything he does irritates you. You hate that noise he makes when he clears his throat, and even when he sneezes it pisses you off. Then you realize, he probably feels the same way about you. So you get offended and start to argue. At first it’s a couple times a month, and then it slowly progresses to almost every unbearable, sickening day.

Some people feel stuck, and keep fighting miserably. Some break up or get a divorce. Some cheat on their partners to get their fix, and then even might end up in break up or divorce.

They don’t show that part in romance movies. The part where Bridgette actually has bipolar depression and Carlson has an opiate addiction. They seem so perfect on social media. They’re viewed as the most adorable, perfect couple on Facebook and Instagram. But they are, in fact, both deeply suffering on the inside.

And when we are scrolling through Instagram and say, “Why can’t John and I be like this? Why doesn’t he bake me cupcakes and plan luxurious picnics on the top of a mountain? Wtf?” We sit there and compare, and it starts to eat us alive.

The things is, we’re all the same. We’re all messed up in some way or another. And even if John does end up taking you on a mountain top picnic, at the end of the day we’re still all broken in our own way.

To be honest, I’m not sure if a long-lasting relationship exists in our society anymore. We have too many awesome things to compare our “shitty” lives to. And when we look at our own REGULAR, uncurated lives, we end up super depressed, disappointed, and anxious because we aren’t meeting the expectations of our false realities.

I haven’t quite figured out what the key to finding a successful, long lasting relationship is, but I sure have come to understand that we’re all trying to find our way in this life we call a “journey.”

I’ll let you know when I do figure it out.

I’m a writer, a lover, and fighter of mental health.