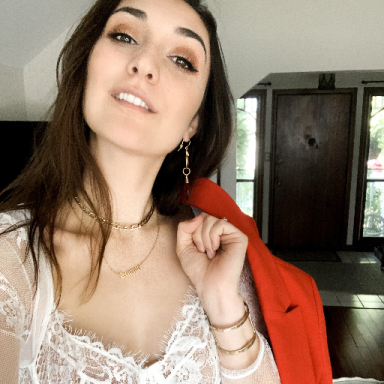 Perhaps if you’re like me, your first instinct is to read the title of this article, shake your head, and say, “Yeah, right,” because somewhere down the line we have mistaken confidence and arrogance as being one in the same.

The definition of confidence has neither cocky nor arrogant as a synonym (don’t worry, I already Googled it).

If you’re like me, this is quite the revelation.

In the past, I’d purposefully made an effort not to look confident by dodging compliments, undermining my work, or saying “I don’t know” after I spoke my mind, even if I knew it was true.

If that resonates, then you’ve possibly also come to the point where you realized you were incredibly unhappy. You’d done too good a job at playing Miss Modest that you lost any sense of security in yourself, capabilities, and even your thoughts.

I had been half expecting a person to come along and congratulate me for my lack of confidence, because being humble and modest are such praised traits.

I’d gotten it all wrong, though. I was neither humble nor modest, and my twisted actions came with great consequences that led me further away from the fulfillment I’d been seeking all along.

One of the greatest consequences was fear. Specifically a fear of everything, but for the sake of an example, we’ll use the fear of rejection. I thought if I wasn’t confident, then I’d never have to fear rejection—I’d already be expecting it.

Yet the more true confidence I lost in myself, the deeper the fear of rejection became. I plummeted into a deep hole of self-hatred with nothing but insecurities and defensive behaviors to show for it.

When I really stopped to think about a truly confident person versus an arrogant person, I found that there was a vast chasm between the two, and my own patterns and behaviors were far more similar with the arrogant side than I wanted to admit.

Arrogant people hide under a mask of confidence that never quite fits, and they have a lot of similar responses as someone such as myself who lacks any true confidence.

I wouldn’t recommend growing up in the household I grew up in, but I did get one benefit out of the experience: a keen sense of observation.

So, in an effort to understand how I could have possibly fallen into the snake pit of arrogance that I’d worked so hard to steer clear of, I began to study levels of confidence in people.

Thought leaders, celebrities, customers, coworkers, family, friends, myself, you name it, I was watching them closely—in the least creepy way possible.

What I discovered is one surefire tell of true confidence versus lack thereof: Fragility.

A person’s response to conflict will tell you exactly where that person is at.

Can you have a tough conversation with them without gaslighting, aggression, or redirection?

Are you afraid to tell the truth around this person?

We as humans have five emotional needs that must be met for fulfillment: feeling seen, heard, safe, loved, and like we belong.

If you are having a difficult conversation with someone and your emotional needs aren’t being met, they aren’t meeting you with true confidence, despite how they present. This isn’t to say that they are in charge of making you feel a certain way, but rather they are able to hold a loving, and safe enough space for you to go to them and be seen, heard without judgement.

The truth is, you are either truly confident or you’re not (yet). Some people might cover this up with arrogance or narcissism, and others might fall deeply into victim mode like I did. Either way, you will be pressed to find someone who lacks true confidence that is open to change, feedback, or holding space, because they’ve carefully constructed armor that has blocked their ability to see beyond themselves.

For too long, we’ve seen wounded hearts pass as the gold standard for confidence, and the result has been catastrophic.

As a white, cis, able-bodied woman, I have a lot of privilege, and lives depend on my ability to be humble and open to changing my harmful behaviors.

True confidence stems from self-love, while arrogance stems from a lack of self-love. A confident person does not require outside validation, talk just to talk, or center themselves in every conversation. They don’t need to. They are secure in themselves and their capabilities, thoughts, and actions.

A confident person owns up to their mistakes, because they know that imperfection is not a reflection of their worth. It is for this same reason that they will happily have the hard conversations and are open to self-reflection, because their self-talk is gentle and compassionate.

In other words, true confidence comes with selflessness. Anything else isn’t really confidence.

Their confidence heals them, and in turn, their interactions with others come from a healed place. We won’t be able to heal the whole world, but we have the power within to heal ourselves, and that’s a great place to start.

So, if you’ve struggled with having confidence in yourself because you’re afraid to be seen as confident, I get it. Let these words be reassurance that what you fear and what you want to become are not the same.

Seek true confidence and you won’t just heal your own wounds, you’ll help heal others too.

Empowering women to heal through the alignment of mind body and soul.