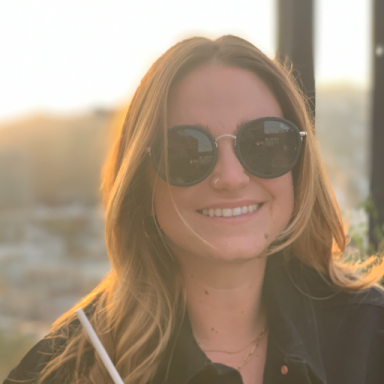 When I realized The Pursuit of Love, a new Amazon Prime show, was a period drama, I almost turned it off. Period pieces aren’t really my thing. I decided to keep it on, really just for background noise while I tidied up. But then, within 15 minutes of Episode 1, the show had roped me in. They give you the characters to love, Fanny and Linda, the characters to hate, Uncle Matthew, and they lay out the characters’ backgrounds in a way that is really easy to grasp.

Linda, a true romantic, is a character I have nothing in common with. A true Capricorn, I find her emotional outbursts exhausting, and I am screaming for her to want an education for herself, not because a man suggested it would make her more interesting! Fanny, however, hits too close to home. In one episode of this show, the writers were able to explain Fanny’s relationship with her mom in a way that I have not been able to verbalize in 27 years of life.

As narrator, Fanny describes her mother’s abandonment early on in the first episode and notes how even as she knew she was lucky for the stability her aunt had provided her, she still longed to be a part of her mother’s life as a child. Fanny also remarks to multiple characters that her mom is known to be “wicked” but is repeatedly spoken highly of — a frustrating juxtaposition that likely parallels Franny’s own feelings about her mother: a constantly fluctuating mix of adoration and resentment.

I found the most telling moment of the episode to be when we witness the interaction between mother and daughter at Fanny and Linda’s coming out party. Throughout the entire conversation, Fanny avoids eye contact with her mother, holding her jaw firm and square. At an event where Fanny is meant to be fawned over, to be the center of attention, her mother, who she hasn’t seen recently, asks her nothing about how she is or what is new with her and moves quickly on to criticism. Fanny responds to her with polite but thinly veiled disdain, and if her mother notices, she is entirely unfazed. Her mother tells her excitedly she must meet her most recent conquest but forgets about her daugher entirely before she can even introduce the two.

Fanny reacts to this with nothing but an eye roll and a sly smile at the event. To an unknowing observer, you would think Fanny does not even care. But I know she does. Because I am Fanny. When my own Mom failed to come to my college graduation, not once, but twice, I laughed about it in public. I was 21 and 22 years old. There had been dozens of important events she had missed before that point. But just because the shock is gone doesn’t mean the hurt is. I couldn’t meet the eye of my own aunt, my mom’s sister, who had driven two hours to wait four just to watch me walk across a stage while she was sick. Or of my dad, who had to be the one to tell me my mom had bailed yet again, who was talking two octaves higher the entire day, trying to be two parents instead of one.

We are told, over and over again, that no one will ever love you like your mother. That there is no love like a mother’s love. So what do you do when your mother doesn’t love you enough? What do you do when your mother is physically present but emotionally absent? When she has chosen to leave you, whether physically or mentally and emotionally. It creates this chasm inside you where you feel truly unworthy. For me, I need people to need me to believe they won’t leave me. Because if the person who literally grew me and nursed me could one day turn around and decide that she no longer wants to expend energy on me, then how can I truly believe that anyone else would stay?

As Fanny sits in the car leaving the party, imitating her mother as quoted above, the subtitles revealed she tried the words first “tenderly” and then again “carelessly,” realizing it only sounded like her mom the second time. She does this, aloud, sitting alongside her aunt and her cousin, though neither questions her. This is the harsh truth of having an absent parent. Those that you can count on, who are both literally and metaphorically by your side, can do nothing but listen and try to understand. Because if it was a partner or a friend who was treating you this way, you’d be gone as soon as you could. There would be advice and interventions until everyone lost their voice. But you don’t get to go out into the world and find another mother.

But it does get easier. I think it will always hurt. I spent the first two decades of my life thinking that each milestone would be the one that changed her mind. The one that made her want a relationship with me. But when I stopped outwardly hoping, stopped waiting for the phone to ring, I began healing. It’s been a slow process. And there is absolutely still a part of me that wants her to want me. In fact, I will always wish our entire relationship, from the day I was born, was different. But then I would be an entirely different person. And I do like who I am.

So to those of you out there who’s hearts hurt when Gilmore Girls reruns come on; who won’t have a mother-son dance at your wedding; who aren’t LGBTQ+ but still want a free mom hug every now and then, please know that you are not alone. Know that just because she does not do enough does not mean that you are not enough. You may never have another birth mother, but you can build your own family and I promise that when you find the right people, they will prove to you that they won’t leave you like she did.

Writing on the weekends and in between meetings