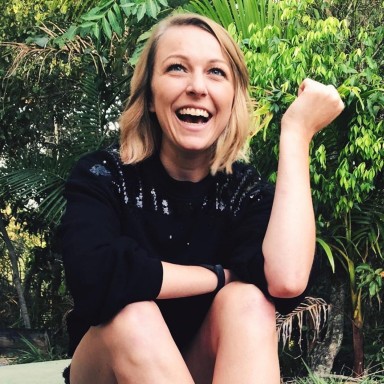 To the bouncer that shocked me to tears on Friday,

I know when I approached your bar you thought nothing of asking for a token search of my bag. I thought nothing of allowing it. That upon pulling out a small carton of apple juice, you figured it would be no big deal to throw it away. Standard procedure, sure. You probably didn’t expect my slightly longer-than-necessary but apologetic and entirely polite explanation about how I was a type 1 diabetic and it was really important that I kept it, incase my sugars suddenly went low, in which case I would need it quite urgently.

I’m sure you’ve had tons of people try it in your time. But, like many bouncers I’ve encountered who have also heard it all before, you could have simply asked me to prove I was indeed a type 1. I’m more than fine with that; you have a job to do. You see, most of the rest of my little bag was taken up with kit that keeps me alive, kit that I can’t leave at home no matter how cute and small and unaccommodating my bag is on a particular night.

I could have easily shown you the medical ID that I carry around in case a member of the emergency services is trying to save my life. I could have shown you my backup injection, the one that I carry should my insulin pump fail. Or the meter I use to track my blood sugars and to deliver insulin into my body around the clock, or the pricker I use to draw blood from my fingers every few hours. I could have pulled my skirt up slightly and shown you the pump that’s permanently attached to my body, beeping at inopportune moments and consistently being knocked by door handles and busy commuters. Any or all of that would have very quickly illustrated I wasn’t trying to pull a fast one.

What I wasn’t prepared for was your aggressive, dismissive and short-sighted response. The one that told me to “Go to the shop and get your jelly beans or whatever it is you guys eat,” or else to not bother coming in. You saw the shock flash across my face, and you heard me tell you I wasn’t trying to be difficult, but that I had the solution in my hand; this sealed, unopened tiny box of apple juice that really was of no consequence to you. Your response? “I don’t care, go to the shop and figure it out.” I’ve seen the things that go on in your bar; I’d say a carton of juice is the least of your worries. If I’d known it was going to be such an issue I would have shoved it in my bra and saved us both the hassle.

This may or may not be a point, but for some reason it really got me – you are a woman. A woman who, just like me, was surrounded by guys who were loud and rowdy. I searched and searched your face for that powerful understanding that we have – humility. There was none. Just aggression, defiance, belligerence. And when you insisted on dismissing my reasoning as irritating at best – after I’d told you that that carton could keep me from passing out – that, at that moment, that became entirely rude. It took the backing of my boyfriend, which possibly coincided with you getting entirely bored of the situation, for you to relent and reluctantly offer to keep it safe in case I really did need it. At which point it was literally taken out of your hands when your boss took the carton from you and put it behind the screen, only to give it back to me in the next second, with a nod and an “It’s ok, I get it.” What was so hard for you to understand about how earnest my protests were when he clearly understood?

I’m upset that you got to me; but you did. I can’t say I remember encountering anyone who has ever made me feel like my condition was an inconvenience to their life. And who on earth has such a right? Yet you somehow managed it, and very quickly too. In a situation like that one, you make decisions. You use instinct, and you use sense, and you use humility, like your colleague who gave me the juice back without me even asking. I don’t get upset or indignant when someone misunderstands my condition; mostly because after 19 years of living with it, I still don’t get it either. And I could forgive you for the sheer ignorance of passing such a stupid comment, borne out of a flippant reaction. But your defiance and refusal to listen to what I was saying shocked me to the point that I found myself crying tears of frustration once inside, over a rather humiliating situation that was completely in your power to avoid. But maybe you’d had a shit day. Maybe you’d encountered a particular breed of drunken dickhead five minutes before I skipped up, high on life.

And aren’t I lucky that I can treat a mishap of my condition with chocolate, or sweets? You’re right, actually. I’m lucky that my condition doesn’t stop me from doing stuff like go out on a Friday night and enjoy myself after a week at work. I feel lucky that my condition is inconceivable to you as anything to be taken even remotely seriously. It’s just some stupid jelly beans, right? So why not just go over to the nearest shop and get some?

Firstly, juice is much easier to swallow in those scary and urgent situations when you can’t process your thoughts properly, and everything around you is confusing, and your breath is shallow. Chewing is not preferable or practical because it takes longer, and then your stomach has to break down the solids. Beyond that, eating with such urgency that you can’t even taste isn’t a pleasant experience. I also happen to know that the exact size of that carton, after many years of unfortunate practice, will raise my sugars just the right amount so that I don’t swing too much in the other direction, dehydrate myself and risk damage to my kidneys. Furthermore, I spend a damn fortune on various forms of little life-saving packets – juice, jelly beans, and the rest – and have done for nearly two decades. Then there’s also the gym membership I need in order to exercise regularly, to make sure the sensitivity to insulin is as good as my metabolism will allow, so that my reliance on the stuff is kept to a minimum and I hopefully knock less than the standard 20 years off my life that comes with this thing. Or the travel insurance I have to buy that’s more than double the price of yours.

I’m sounding facetious now aren’t I? I agree, which is why I very rarely, if ever, view my condition in this way. I resent even feeling the need to write this, days later. I don’t speak “Woe is me!” very well, nor do I want to. But who are you to make me, or anyone else in my position, stand out in the cold justifying something I have to live with and manage and navigate every single minute of every day? Justify carrying something potentially life-saving just because it doesn’t come with a prescription label, in sterile packaging?

It was at about 5 AM that same night when I suddenly woke up with a dangerously low blood sugar, desperately lacking the glucose in my brain that enables YOU to think properly without worry, and breathe properly without concern. I wasn’t able to move my body from the bed any further than to pull an innocuous, battered box of juice from a handbag at the side of the bed. I just about managed to guzzle it in the pitch black to stop me going into a coma, sweating and shaking uncontrollably while I tried not to wake anyone else. The very same carton that you tried to take from me.

Read this: You’ll Never Want To Work As A Phone Sex Operator After Reading This Story
Read this: The Real Reason You’re Single That You Haven’t Thought Of
Read this: 19 Things Only Women With A Low Maintenance Fashion Sense Understand

This post originally appeared at Young, Fun, And Type 1.