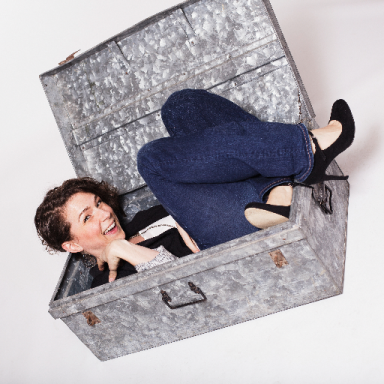 I am 33 years old and I’m learning how to be an adult.

As a kid, I rarely pushed through discomfort. My parents wanted a better life for me than what they had, so they gave me all the things I could ever want. For this, I’m eternally grateful.

Like anything in life, too much of a good thing can tip into diminishing returns. Their dedicated care for my comfort offered me free “outs” when I didn’t want to do something.

If I didn’t want to accept a friend’s invitation for a spend-the-night (and I rarely did because I loved being home), my mom would say, “Just blame it on me! I don’t mind.” And sure enough, I’d lie and tell the friend, “My mom won’t let me.”

Never ever did I say something along the lines of, “No. I don’t want to” or “I’d rather do something else tonight.” I did not say either of these sentences until I was in my thirties.

I relied on my mom to quit jobs for me (yes, really), to handle confrontations I was afraid of, and to cancel on aspirations like piano lessons when I wasn’t immediately amazing at whatever it was.

I had zero tolerance for discomfort. When something got challenging, I quit. If I wasn’t good at something or didn’t understand it, I’d stop doing that thing. I had a thousand projects begun and zero finished.

Not sure if you’ve learned this yet. It’s a new one for me. Growth is uncomfortable. Healing is uncomfortable. Anything worth having or doing goes through times of discomfort. Just because something shifts from enjoyment into a lull or discomfort doesn’t mean it’s time to quit. It’s part of the ebb and flow of life. It’s part of the cycle of evolving as a person or in a relationship or vocation.

One of my biggest lessons has been to learn to self-soothe, to stay still in discomfort, and to push through and over obstacles rather than give up at a hint of resistance or rejection.

Let’s talk a little about how things were and how I previously handled uneasiness.

I wrote my first book, then I refused to market it. I had opportunities, but I wasn’t willing to deal with the discomfort of potentially being rejected. I avoided it altogether. I gave myself the rejection I was afraid and thus didn’t have to deal with the pain of a potential letdown. I controlled the situation and therefore was unsurprised and unscathed by the result.

The first scenario is evasion and avoidance and this idea that talking about doing something is almost as good as doing it. The second is taking responsibility, saying I tried, and being willing to take what I learned and continue moving forward.

The first says, “I bet I could be really good if only I applied myself. Oh well, I guess we’ll never know.” It’s a cop-out.

I’ve spent countless hours, days, years daydreaming about all I could be, cursing the Universe for withholding the thick skin or willpower I needed to take action steps forward.

When relationships got challenging, I would cut and run rather than have difficult conversations which could have cleared the air or bridged communication gaps.

I simply wasn’t equipped to handle the discomfort.

Boundaries were nonexistent for me. If someone said something that made me uncomfortable (ex: a customer responding with, “You can tell me what kind of panties you’re wearing under there,” after I asked, “Can I do anything else to help you, sir?”), I’d resort to evasion or humor. Everyone loves humor. Laughter cuts through tension and releases the steam underneath.

I let men say things to me, touch me, take and share pictures and videos of me, all because I was afraid of the discomfort of saying no.

I stayed in jobs I despised, relationships where there was cheating on one or both sides, and in living situations which were clearly unhealthy, all to avoid discomfort.

I drank, I chewed pain pills, I obsessively controlled my eating, and I self-harmed all to stop myself from feeling uncomfortable human emotions or the natural growing pains of progress.

Similarly, I didn’t know how to handle lulls in life. Y’know, those boring in-between times when we’re just sort of waiting for the next thing to happen. I’ve learned to call these The Hallways when we have left one room and are walking toward the next.

I deemed The Hallways “mediocrity” and would seek out anything to shake things up a bit. I’d overcommit or start a new project. I’d dive into deep self-analysis or conjure up a problem in one of my relationships just so I could busy myself solving it. I’d make drastic decisions (cut my hair, quit a job, end a relationship, pierce a body part) so I could feel excitement rather than the drab, drawn-out, seemingly never-ending ellipses of boredom.

How did I transition out of evasion, avoidance, numbing, and sabotage? How did I change my relationship with discomfort?

Yes, I practiced being uncomfortable. I still do.

I’ve committed. In friendships and my romantic partnership, I removed “breaking up” as an option. Without the exit door, I had to learn to deal with messy humanness. It has been challenging. I’ve had multiple temper tantrum meltdowns. I’ve considered running and living in another country with elephants. Instead, I’ve stayed. I’ve breathed through the discomfort, recognizing that it isn’t going to kill me. Then, on the other side of it? My relationships have all become stronger and healthier.

I committed to getting my black belt in Choi Kwang Do. This takes 2-3 years. There is no rushing it (I’ve tried to convince the head instructor to let me progress faster; it hasn’t worked). I’ve considered quitting multiple times. I’ve gotten frustrated and walked out of class because I wasn’t as good as I thought I should have been.

And yet, I always came back. I learned to let myself be bad at new punches, kicks, dodges, and patterns. I learned no one else was looking at or caring about what I was doing; they were all too focused on themselves. And if someone did offer feedback? Great! Now I can further improve.

I now have a blue belt. I’ve been through white, yellow, orange, green, and now blue. Next, I’ve got purple, red, brown, and then black. I am halfway through. This is a miracle. I’m not sure I’ve ever stuck with anything for this long.

I utilized an amazing therapist via cognitive behavioral therapy. We talked, I’d get triggered and feel emotions and shut down to where my words didn’t work, and she helped me learn how to act and speak in the moment while feeling the uncomfortable emotion rather than repressing, resorting to humor, or deflecting.

She helped desensitize me to it all while helping me feel it more fully.

I then practiced this in relationships. First, I’d have to type out my feelings. I am a writer, after all. I sent my boyfriend novel text messages and emails trying to express how I felt.

He was immensely patient.

Next, he challenged me to read him what I’d typed. This helped me get comfortable with vocally saying the words I’d written, teaching my mouth to verbalize my emotions.

The proceeding challenge was to verbally express how I felt about a situation without needing to first type out a dissertation. I mumbled and grunted and there was definite perspiration. I used a lot of words and analogies and brought up the past. I’d try to state my entire case to justify or explain why I felt what I felt. If a PowerPoint presentation was an option, I’d have utilized it. I’d run around in verbose circles and sort of eventually arrive at my point.

He hung in there through that process, too. We learned a lot about each other, about grace, about progress, and about true acceptance and love.

This transitioned us to the level I’m now trying to master: succinctly expressing how I feel without trying to justify or overcome potential objections.

I’m admittedly stumbling through this one a bit. Some days are easier than others. The other night, while trying to express frustration, it took me 45 minutes of stuttering and grunting and rubbing acupressure points on my face to say, “It upsets me when you do this.”

I still freeze during confrontation sometimes. But now I have tools. I have deep breathing to calm my central nervous system. I have my physical senses to anchor back into my body. And most of all, I have a growing relationship with myself, knowing that no matter how messy a conversation gets, I’ll still be there for me.

Healthy discomfort isn’t something to avoid.

I used to pursue a goal, feel super excited about it, and then quit the moment discomfort arose, all under the guise of, “Well, if it’s not a hell yes, it’s a hell no!”

Sure; sometimes discomfort and fear need to be listened to. Other times, it’s an indication that I’m growing outside of my current container and that I need to keep going.

Writing the way I write is uncomfortable—sSharing vulnerably, creating videos, rapping, and sharing comedic snippets. It’s fun and easy until it’s not. Once I receive a hint of rejection or a thumbs down on a video or maybe even zero response to something I spent hours on, that’s when discomfort arises. I’ve given meaning to this irritating sensation in the past: “This rejection must mean I’m not supposed to do this.” The tiniest hint of someone less-than-adoring what I’d created was enough to spook me into isolation for weeks or months.

I’ve spent many nights crying in a heap on the floor, wailing to my boyfriend that I know I’m here to write and speak and share my experience, strength, and hope, and it’s just not happening for me.

And yet, I haven’t submitted an article for publication in years. I haven’t posted to my blog in 3 and half months. I’ve made one YouTube video in the last few months. I’ve done zero open mics. Of course it’s not happening for me; I’m not following through. I’m not showing up.

The success I desire, the dreams I’ve had since I was a kid, those are all on the other side of discomfort.

Today, I discovered I have eight articles I’ve written, around 15 poems, and 3 and a half books. There are some I don’t even remember writing. They’ve just been sitting there on my desktop, wiggling their cute little butts in anticipation of finally being shared.

This article is one of those pieces. It’s been nestled in the corner, hanging out with the other 90% completed projects, waiting for me to pick it back up, finish it, and put it out into the world.

I’m done controlling outcomes by giving myself rejection through not sharing my work. That’s far more debilitating and depressing than an online journal saying “no” to publishing a piece.

So here I am, armed with the same projects I’ve been hoarding for years. Except now? I’ve got discomfort on my side.

Keep up with Jen on Instagram, Amazon and jenniferannbutler.com