Shooting guns is an American pastime, but getting shot shouldn’t be.

In the wake of America’s 353rd mass shooting in 2015 alone, US Senators and Representatives took to Twitter to share their “thoughts and prayers.” 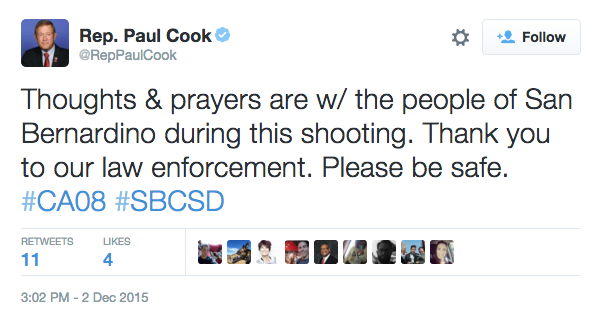 Because nothing says “I give a f-ck” more than a 140-character prayer in an ecosystem where things remain relevant for a nanosecond.

Of course, you’d think after something like this happens 353 times in one year, they’d do more than think and pray; they’d change the law.

Most mass shootings are carried out with semi-automatic weapons like the AR-15.

This assault rifle — a term rumored to be coined by Adolf Hitler — can shoot up to 30 bullets in under a minute, and reloading it as easy this:

And Americans love the AR-15. Here’s some guy teaching his 7-year old daughter how to shoot one.

You can actually order and customize your own AR-15 online.

In fact, there are more places online that sell AR-15s than sell Adele’s latest album.

Some might say, “But Jared, you need a permit to buy one of those guns.”

82% of the mass shootings in this country have been with legally purchased guns.

That means that regardless if they’re Muslims, Christians, mental patients, or Marilyn Manson fans, most of them have been armed legally right here in America.

But it didn’t always used to be this way.

In 1994, after a series of public mass shootings, Congress passed The Federal Assault Weapons Ban which made purchasing semi-automatic assault weapons illegal.

Some gun owners were angry.

There seem to be two reasons why some Americans want to own assault rifles.

The first one is to hunt. You need thirty bullets in under a minute to kill something? What are you hunting? A wooly mammoth? A T-Rex? I think everything that requires that much ammunition to kill was wiped out by human beings or nature a long, long time ago.

The second reason some Americans want to own assault rifles is to protect themselves in case the government rises up against them.

PRO-TIP: The Government has robots that shoot terrorists from the sky. And tanks. Your rifle probably won’t protect you from a tyrannical Government.

But none of that really matters because Congress allowed the Assault Weapons ban to expire in 2004.

That’s right. You heard me. They just let it die.

Since 2004, the number of public mass shootings has nearly tripled.

The way I see it, we’ve got two choices.

Either we accept public mass shootings as part of our daily lives and welcome a world with products like this:

Those are bullet-proof blankets for children to wear when they are under attack. At school.

Or we can start making some new laws.

The first one is a quick and obvious win: The Government should ban the sale of assault weapons. Of course, this won’t solve everything. Public mass shootings account for only a portion of gun deaths in America. But it may make us feel safer about going to places like schools, malls, and houses of worship.

And that won’t happen with thoughts and prayers. It will take decisive action and willpower.

We elect our leaders to lead and legislate, not think and pray.

So if after the 354th mass shooting, every Senator and Representative tweets, “LET’S CHANGE THE F*CKING LAW,” you’re going to see a safer America emerge.

All resources in this rant can be found here.

37 Mass Shooters Who Were On Antidepressants