Keeping up with the Kardashian-West family’s interior design is a fast-moving game. Kim and Kanye have moved multiple times, and are pretty consistently in the process of upgrading their interior decor. Their latest home, an estimated $85 million “minimal monastery” drew attention for many reasons, but in Kardashian’s Vogue “73 Questions” interview, fans noted that her bathroom sink was, well, a bit odd-looking.

Eagle-eyed viewers noticed that when the camera panned into Kardashian’s bathroom, the sinks — which are laid out in the middle of the room, not against the wall, on their own island with drawers — were missing something pretty essential, a basin. The basinless, flat-topped sinks appeared to be just flat stone with faucets on top. Of course, people immediately started speculating on how exactly that would work. Noticing all of the interest, Kardashian uploaded a video to her social media accounts explaining that the countertop actually has a very subtle slant to it — similar to what you would find in a shower — with an opening for the water to drain.

She showed viewers that no matter how high you put the water pressure, there’s no backsplash, and it all drains effortlessly.

For those who are trying to mimic the stunning, minimal and very unique style, you will most likely have to call a professional. In an interview with People, Tamara Day, who is the host of HGTV’s Bargain Mansions, estimated that the sink would cost at minimum $25,750. She says that you’d have to hire a stone fabricator to hand-build the sinks, which were originally designed by West, interior designer Axel Vervoordt, and Claudio Silverstrin.

“It’s a tricky balance getting the slope just right without severe angles, so the water stays in one place,” she told the magazine. “Only the best fabricator can accomplish this.”

Of course, this is also without taking into consideration the cost of the materials themselves. Stephen Fanuka, a celebrity contractor who People also interviewed regarding the project, says that he estimates the stone itself would cost upwards of $5,500. “Based on the color, my guess it’s a man-made material, which is more durable and stain resistant,” he said, adding that the thickness is a “tedious fabrication process,” again calling for a professional.

However, if you do want to recreate the sink in your home, you would need to follow these steps to achieve it:

Create space for the sink.

To recreate Kim and Kanye’s design exactly, you would need to make room for a freestanding sink. This would only be possible if your bathroom were big enough for it. If not, using your pre-existing sink setup attached to the wall is just as viable, but will not give you exactly the same look. If you do detach your sink from the wall, you will need to build or purchase a countertop that is wide enough for one or two faucet installations.

The convenient part of having your sink attached to the wall is that the water lines to your faucet are easily concealed. With a freestanding countertop, this wouldn’t be the case. You would also have to account for needing to move the water line to where your new sink placement would be.

Remember that if you end up moving the placement of your countertop, the wall behind it will have openings for the faucet, and will probably need to be re-drywalled, plastered or tiled.

Kim and Kanye went with a man-made material, but that doesn’t mean it has to be the case for you. Choose whatever stone or material you’d like in your bathroom, and prepare to buy a large part of it in bulk.

To achieve the same look, you will need a professional to come in and hand-design the sink themselves. They will need to create an extremely precise slope on which water can effortlessly flow toward the drain without creating a mess.

Faucets will be the only hardware on the countertop, meaning they’re going to stand out more than normal. Be this as it is, you’ll want to choose the best option for you. Consider a statement metal, such as gold or silver, if you want to complement a neutral stone. Otherwise, brushed brass, sterling silver, or even black could give you that sleek, minimalist look you are going for. 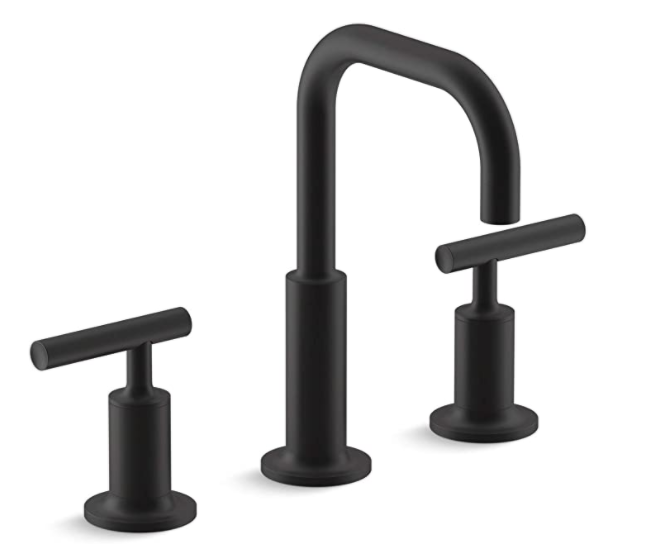 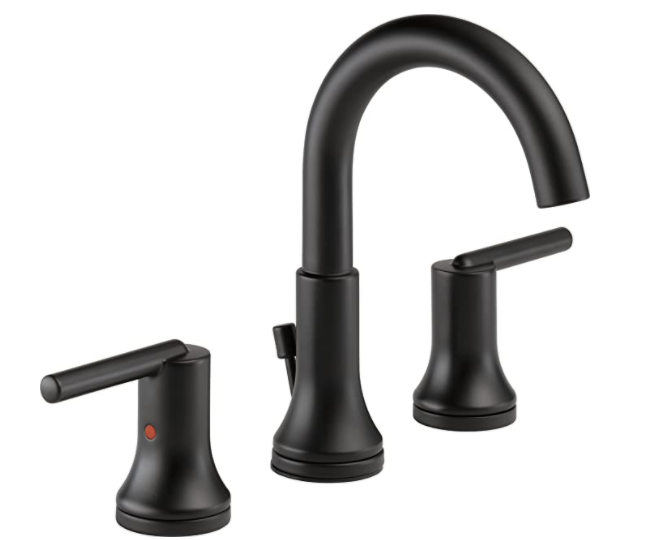 Delta bathroom sink faucets with DIAMOND Seal Technology perform like new for life with a patented design which reduces leak points, is less hassle to install and lasts twice as long as the industry standard*. Plus, everything you need is together in one convenient box, including integrated supply lines and drain assembly, so there's no need to order additional parts.

Tailor the rest of your bathroom.

Your statement sink is only going to work if the rest of your bathroom is sleek and minimal as well. You’ll want to make time to coordinate the rest of your design, using matching neutral stones and straight surfaces as often as possible, as Kardashian and West did.

Though basinless sinks are indeed unique looking, they can also be a truly standout piece that adds value, interest, and one-of-a-kind style to your bathroom.

The Types Of Faucets You Should Install In Your Bathroom

The Best Utility Faucets for Your Laundry Sink

The Delta Accessories You Need For Your Bathroom

The Best Kitchen Sinks For Your Tiny House