If you’re looking to make an upgrade to your bathroom that’s both eco-friendly and a lot more pleasant to use, you might want to install a shower head with low water pressure.

You might be wondering why you’d want low water pressure, considering that it’s often referred to as a negative issue, one that can be rectified by cleaning the calcium out of your shower head. However, this is because “low pressure” is often referred to as the issue that occurs when the shower head isn’t functioning properly and only a fraction of the necessary water is being released. This is a different issue than intentionally wanting to create a calmer, more rationed water flow.

When your water pressure is too high, it can be uncomfortable to bathe, considering how much liquid is hitting your skin at such a fast rate. More than that, though, it’s also a huge waste of resources and can seriously impact your water bill. According to some experts, a number of years ago, shower heads delivered roughly five to eight gallons of water per minute. However, the current standard is a shower head that dispenses 2.5 gallons of water each minute, and a low-pressure shower head would deliver about two gallons each minute.

How Does A Shower Head Become Low Pressure?

Unlike a clogged faucet which releases smaller amounts of water by default, some shower heads are low pressure because of the way they are built. Here are the main features you should be looking for:

Aerating means that the water in the nozzle is dispersed intermixed with air, making it more mist-like than a harsh water flow.

This is the most common type of shower head, which features individual streams of water, distilling the water into much smaller streams, making it more pleasant on the skin and using less water overall.

Some regard this as the best option, given that the flow restrictor allows more or less water through the line based on your control. This means that you can adjust the pressure as needed. This is great because most likely, multiple people use your shower, and they all might have different preferences. It’s also ideal for multi-functionality, given that you could use your shower to wash your dog or household items.

How To Measure Water Pressure

To get the most technically efficient measurement of whether or not your water pressure is low, average, or high, you will want to measure the water’s PSI, or pounds per square inch. To do this, you can either use a pressure gauge, which you can buy at most home improvement stores, or you can hire a plumber to come out and test it for you.

Normal water pressure will generally measure between 40 and 60 PSI. However, most homeowners prefer something right in the middle of that, ranging in the 50s. Low water pressure is in the 30s, and high is above 60.

It’s important to measure your water pressure regardless of whether or not you want to change your shower head or gauge the efficiency of your home’s usage. This is because changes in water pressure can signal serious problems with your plumbing, which you’ll want to address sooner rather than later.

If you want to get a rough estimate of how your water pressure is functioning in your shower but don’t have the time or resources to get a pressure gauge or a professional, there’s one other trick you might want to try. Place a one-gallon container beneath the nozzle and put the water on for one minute, timed. If the gallon is filled up completely within about 24-32 seconds, your shower head is releasing at low flow. However, if it takes 15 seconds to fill, your rate is about four GPM, and if it takes 10 seconds, your rate is about six GPM. This would mean that your water pressure is running normally, or high.

Remember: unless you specifically have a low water pressure shower head, your GPM shouldn’t be low. Inefficient plumbing or hardware can mean bigger problems down the line. You would only want to measure a low GPM if you have already installed a low water pressure head.

State Standards For Water Use

Opting for a low water pressure shower head might help you with more than just a more enjoyable showering experience. In fact, it might also assist you and your family in staying within state regulations for how much water you are permitted to use in a day.

If you are located in the U.S., you should research your state’s regulations regarding water use. Typically, these regulations are left within the jurisdictions of separate districts, meaning that if the state’s code permits a certain amount of water used per district, each district can enforce those regulations as they see fit.

This is particularly important in states that are prone to water issues and droughts, such as California or Arizona. This is why it’s important to research your own state and district’s standards. In fact, earlier last year, California actually signed a bill in hopes to limit resident use of water each day, with a goal of reducing the average 55 gallons/per person a day used to 52.5 gallons used by 2025. Ultimately, they hope to get it down to 50 gallons/per person a day by 2030.

Some estimates suggest that the average family of four uses 60 gallons/per person a day, given that they live in a home that has older or inefficient plumbing, toilets, faucets, shower heads, dishwashers, etc. This includes the use of a 40 gallon washing machine, as well as the typical 8 minute shower per person.

This is why the use of a low pressure shower head can be especially helpful if you live in one of these districts, and don’t want to have to reduce your usage of other household appliances or comforts. According to the Water Footprint Calculator, next to toilets, showers are actually one of the top appliances that utilize the most gallons of water per day.

The benefits of investing in a low-pressure shower head can be summed up as simply as follows:

Save water. Low-pressure shower heads use less water—in some cases, at least half of what you’d normally utilize.

Save money. With less water used, you can count on less money spent.

Save energy. With less water to heat and funneling through the sewage system, you’re ultimately saving as much energy as you are saving water for lower electric and/or gas bills every month.

Fortunately, given that attaining low-pressure water flow is just a matter of changing the shower head, installation is not any different than a regular faucet installation would be.

If you’re concerned about the planet and your community’s well-being as much as you are about your own comfort, there are a number of reasons to invest in a low-pressure shower head for the environment’s sake.

First, low-flow shower heads contribute to decreased water consumption, sometimes by almost 50% in a month. This means that it conserves water, and, throughout the course of a year, can possibly provide a significant year-end savings in your bill. Second, showers don’t only use water; they also use energy to heat the water, which means that cutting down on water also cuts down on how much you are using your hot water heater. Some estimates suggest that you can expect to save at least $50 annually on heating by doing this.

Finally, and even more significantly, a low-pressure shower head also cuts down carbon dioxide emissions, given that the amount of hot water being used is reduced, and therefore, the amount of energy being used is, too, resulting in less CO2 in the air. 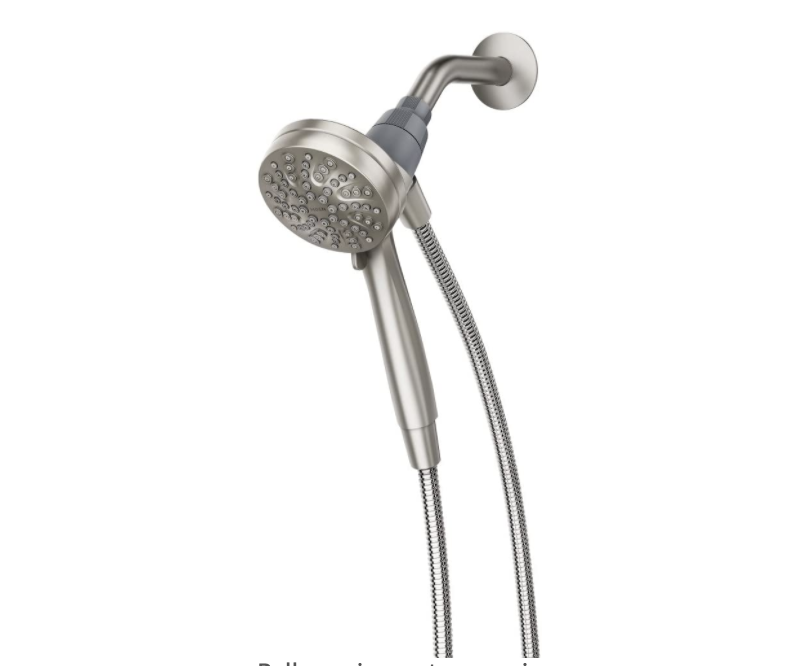 Inspired by patterns found in nature it offers a distinctive design which is at home in any transitional décor. Gracious and uncomplicated style features give the engage Collection an ageless yet fashion-forward presence. Tailored yet relaxed, the engage Collection is an exercise in design balance. This lustrous Collection works seamlessly with today's Lifestyles.

Each of the six customizable jets in this head is actually hosting eight separate streams of water, meaning that you’re effectively getting 48 streams of water instead of the six that it appears to have. With a magnetic docking system and adjustable flow, this handheld shower is perfect for an elevated bathroom experience. 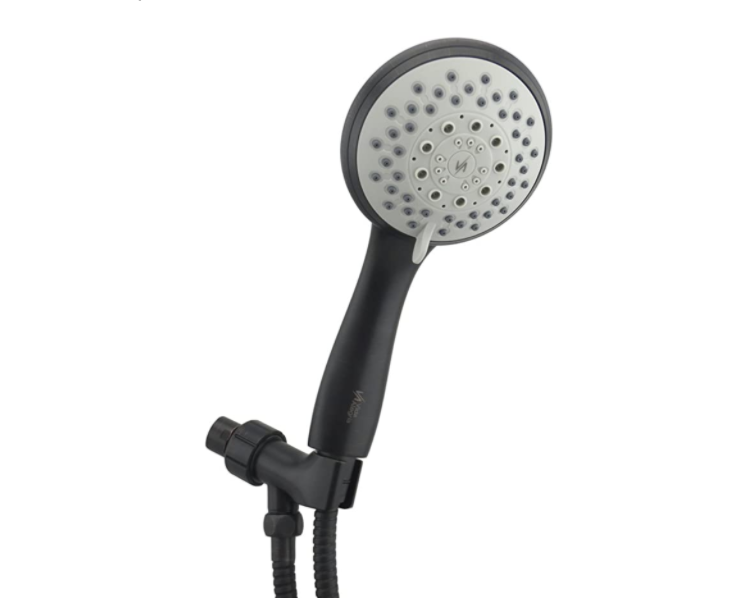 The H5+ SPASHOWER Handheld Shower Head offers 6 adjustable water sprays in a handheld wand with a flexible, stretchable stainless steel hose to accomplish the most enjoyable shower experience you will ever encounter. 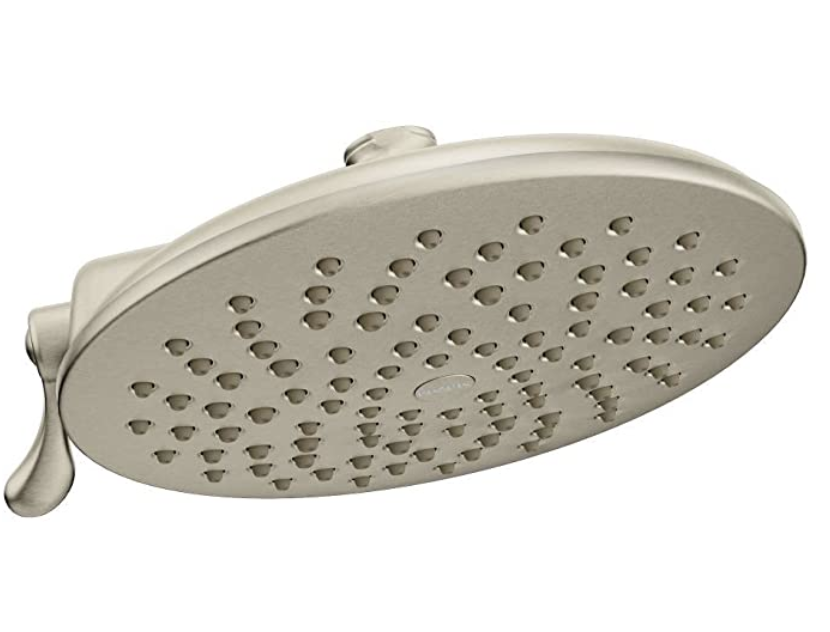 The rainshower experience that you can control is available in the Velocity showerhead with Immersion technology. A flip of a lever allows either a calming rain rinse function or a self–pressurized spray.

This leveled shower flow makes for a more minimal, streamlined experience, offering a flat head and multiple mid-sized streams. It’s the perfect option for a simple showering experience without any of the frills.

Other than your personal comfort, the big benefit of having a low-pressure shower head is that it will potentially reduce your water bill and be more environmentally friendly. Water conservation is important, because though there is an abundance of saltwater on the planet, to make it consumable it must go through a rigorous process of filtering and desalination. Therefore, the water that we use in our everyday lives is limited and requires a lot of resources to get to our faucets. In addition, using great quantities of water drains septic and sewage systems and also will cost your neighbors in the long run.