When it comes to redesigning any space in your home, it’s as much about functionality as it is style. For many families, accessories like a handheld shower head add versatility and more accessibility to the shower, as well as an upgraded appearance.

Though the majority of aspirational photos you see of redesigned and upscale bathrooms involve traditional fixtures in terms of faucets, nozzles, and spouts, the reality is that your space has to work for you, and in many cases, a handheld shower head can really transform your bathroom experience. Even though your mind might immediately go to what you can do to improve the aesthetic appearance of your home, remember that the best design also makes your experience of a room better.

Many people may assume that a handheld shower head is reserved only for homes of those who are disabled, however, this is not true. A handheld shower head can greatly increase the ways in which you utilize your shower, and it can also add another layer of luxury to your bathroom for a relatively low cost.

What Is A Handheld Shower Head?

What Are The Benefits Of A Handheld Shower Head?

Aside from simply making it easier for water to reach different parts of your body and clean you more thoroughly — as a traditional shower head will only pour water from directly above you, in a relatively small stream — there are many other benefits as well.

You can bathe from a seated position

Whether you are someone who physically requires a seat to shower, caretake for someone who does, a handheld shower head is ideal for anyone with limited mobility. It makes showering a lot easier and ensures that you can get a thorough clean without having to maneuver around the direct stream of a traditional shower head.

If you’re responsible for another individual’s hygienic care, whether you need to bathe them every day or clean them in other ways, a handheld shower head makes that a lot easier.

If you don’t want to give your children a bath in a tub, or if you don’t have a tub, a handheld shower head allows you to clean them faster and easier, and with more precision.

It makes you able to bathe a pet

If you also use the shower to clean your pets, a handheld shower head will allow you to reach different parts of them without having to struggle too much.

You can keep your shower cleaner

If you struggle with accumulating soap scum, dirt, or other messes in your shower, cleansing it after each use with a shower cleaner and then rinsing it with a handheld shower head will keep your space as clean as you’d like it to be.

What To Consider Before You Install A Handheld Shower Head

First, decide whether your new handheld shower head will be part of a full bathroom renovation, or if you’ll just be replacing the one fixture. This will impact the complexity of the installation.

If you’re moving the placement of the shower head, you’ll also need to rewire the plumbing so that the water line is in the correct spot. If not, you will only have to concern yourself with whether or not the shower heads are a comparable size. Unfortunately, installing a shower head with a smaller base may expose a discolored wall or a spot where not enough tile is installed. Either way, you will have to make sure you’re prepared to finish the surrounding area.

However, if the shower heads are of comparable size, you shouldn’t have that issue.

Handheld Shower Heads Don’t Have To Be Unattractive

Though they are almost always larger than a traditional shower head, they don’t necessarily have to be less attractive. You can still opt for a shower head in a stylish accent metal, like gold or bronze. In other cases, you can look into a high tech shower head, perhaps one with various water stream options, or LED temperature regulation.

This silver set includes both a traditional stationary shower head as well as an additional handheld one, so you can use one or the other.

This gold set is a perfect example of a high-end shower set. This includes multiple water temperature nozzles, as well as a single shower head. This option is able to be situated on the wall if you want it to act as a typical shower head would, and it also comes with an extra-long hose so you can take it off and move it all around the shower. It is a good idea to make sure that if you have a larger sized shower or bathroom your nozzle can reach anywhere you want it to. 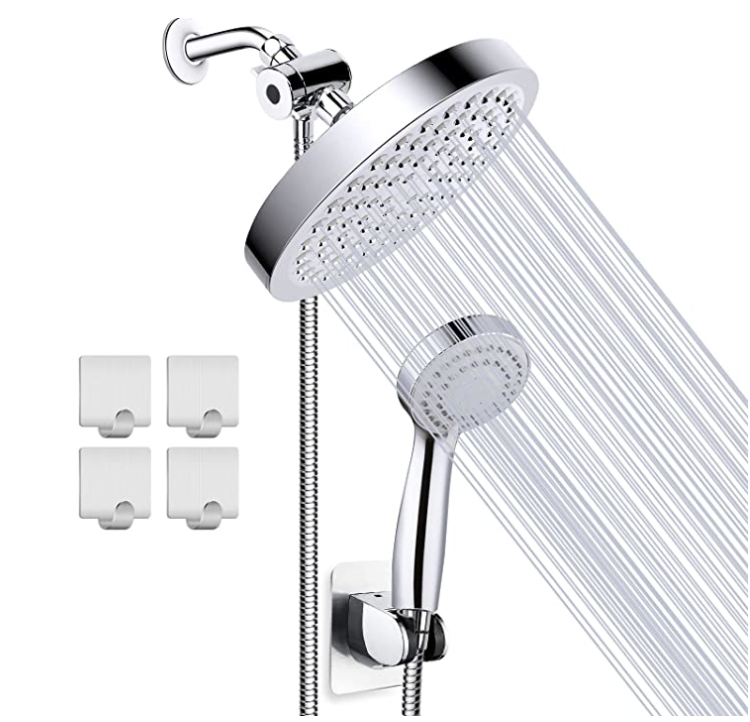 Our rustproof ABS plastic Luxury Chrome Plated Rainfall Showerhead is the perfect replacement that will jet out high-pressure rain of hot water so your whole body is doused with the downpour, and the swivel ball connector you can adjust and fix it to any angle you like, this shower tools will definitely offer You hotel-style shower experience ever.

This long-stemmed option adds an elegant addition to your shower. There are two shower heads, one that is stationary and overhead, and another that is portable, so that you can have a luxurious typical shower experience as well as the functionality of a handheld shower head. 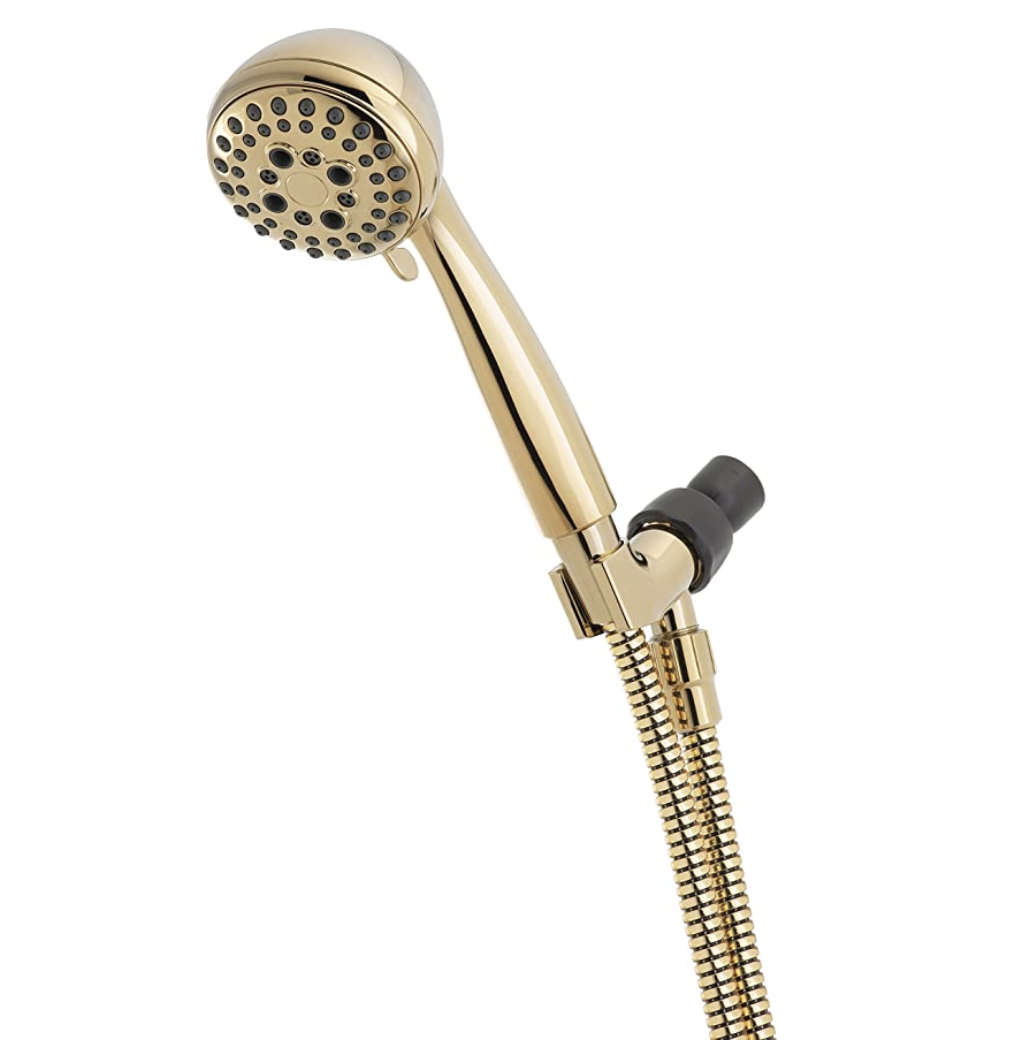 Vintage and elegant, Polished Brass lends an old-world look to traditionally-styled bathrooms. The highly-glossed surface and vibrant warmth provides a pop of color against neutral tones for an eye-catching highlight to your decor. Designed to look like new for life, Brilliance finishes are developed using a proprietary process that creates a durable, long-lasting finish that is guaranteed not to corrode, tarnish or discolor.

If you’re looking for a more streamlined, minimalistic design, this gold handheld shower head is perfect. It has all the features of a high-end, statement piece (it is made with a striking gold finish and comes in other color options) and can be stationed high up so that you can have a traditional shower experience. However, do note that with this option, the shower head is going to be a bit smaller than a typical one. 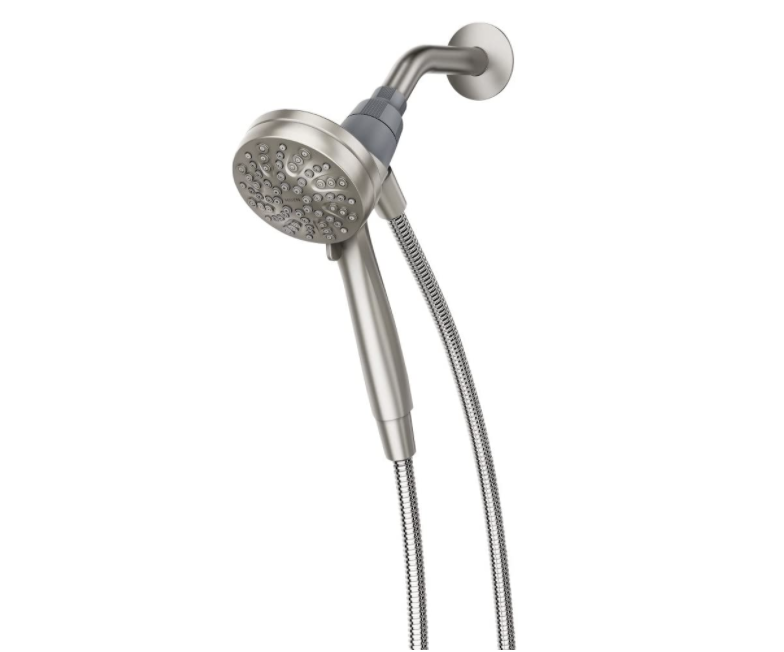 Spot Resist Nickel finish resists fingerprints and water spots for a cleaner looking bath. The magnetic docking system allows you to easily detach and use as a handheld shower head or effortlessly replace it to dock with the snap of a magnet.

This two-in-one shower head combination gives you the best of both worlds, in a really unique set up. The stationary shower head is installed to the wall as usual, however, the handheld portion of it is attachable to the inside of the other shower head, making it almost invisible. This is perfect if you want both a more streamlined design as well as the functionality of both types of shower heads. 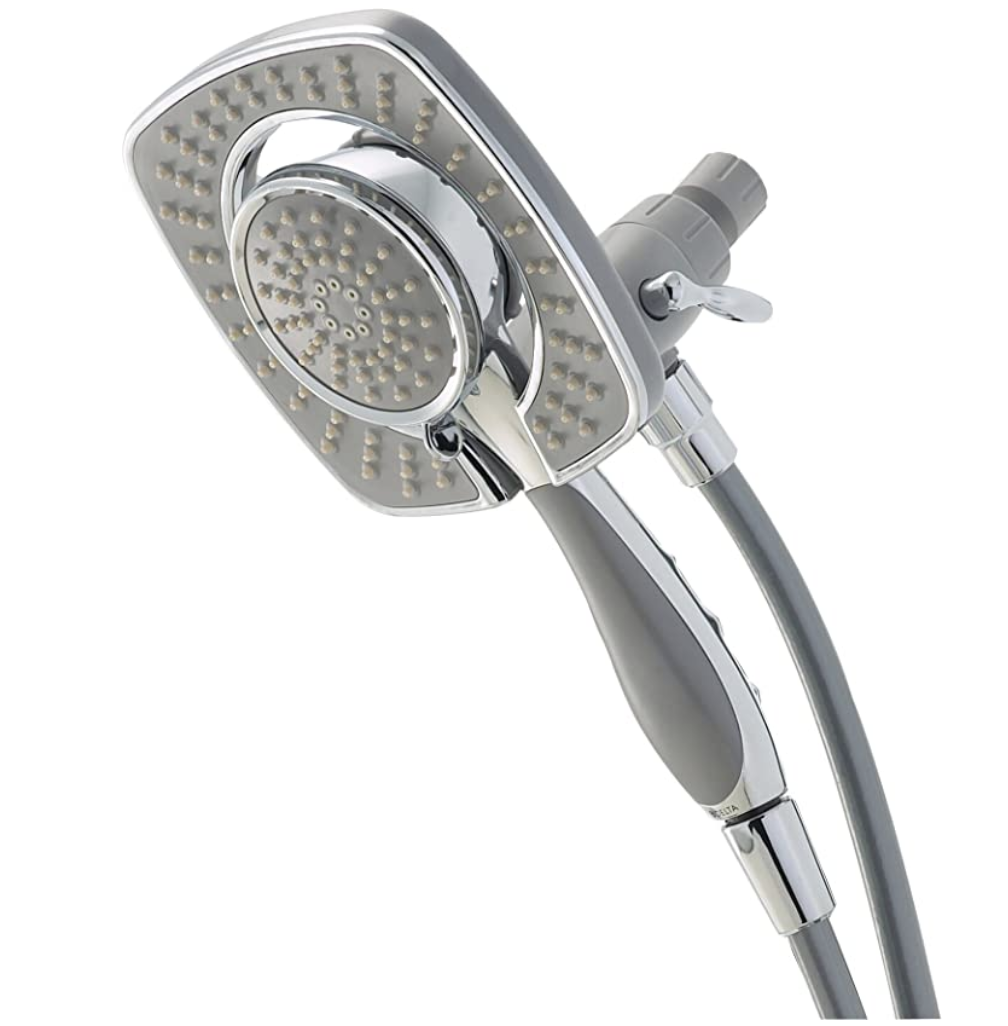 Simple and straightforward, this shower head offers multiple spray patterns so you can get the most out of your shower experience, and adjust the pressure and output depending on what you need to wash.