When it comes to the latest innovation in home technology, digital showers are an up-and-coming trend. Gone are the days of pacing showers, burning or chilling your hands while you regulate the thermostat, and guessing the rate of your water flow. Digital showers merge technology and comfort, giving you the most ideal bathing experience.

A digital shower can come with multiple attachments and accessories but is based primarily on a digital interface that allows you to manually control things like the temperature of the water, the lighting, the water pressure, music, multiple user settings, and so on. You can install a digital shower in combination with coordinating accessories such as rain showerheads, speakers, LED lights, and other items to make your experience as ideal as possible.

Digital showers are somewhat of a new invention. It wasn’t until the last few years, particularly when smartphones started becoming popular, that the concept of digital showers could even work. (Many options utilize an app to function, though others are simply manual.) Regardless, digital showers utilize cutting-edge technology, making them even more appealing for your home.

Why Are People Looking For Digital Showers?

When you think about the most stressful parts of your week, such as hectic morning routines, or a hard workout, you’ll quickly realize that the bathroom — and particularly, the shower — is where we release a lot of stress, prepare for the day ahead and unwind from it as well.

Digital showers completely transform the bathing experience. They create order, structure, and certainty, as well as some very much-desired control over your first and final experiences of the day. With the technology now available to actually have a remote control that can manually control each aspect of the shower itself, it makes sense that a digital shower not only adds luxury and convenience to your home, it would also undoubtedly create a desirable selling point and possibly improve the resale value if installed in combination with other luxury features.

Digital showers are a newer invention, utilizing cutting-edge technology that in some cases involves touch screen capabilities and smartphone app coordination. It’s for this reason that digital showers not only increase the comfort of your home now but the desirability of it in years to come.

The Difference Between Digital Showers And Smart Showers

Digital showers and smart showers are two terms that tend to be used interchangeably, but they are not actually the same thing. Digital showers refer to the remote control that can be installed in the shower or somewhere else in the bathroom that allows you to manually regulate aspects of the shower, such as the temperature, or the “on” and “off” button.

On the other hand, smart showers are more comprehensive. While they can utilize a digital shower feature, smart showers often come with additional features, such as an app that can also control the shower (you’d be able to adjust the temperature or turn it on using your phone) as well as controlling the duration of the music.

How Does A Digital Shower Benefit Me?

The main benefit of a digital shower is that it allows you to have more precise control over your bathing experience. A digital shower will allow you to choose the exact temperature of the water, and regulate it manually, as opposed to guessing as you move the nozzles back and forth. In addition, a digital shower can allow you to listen to music while you shower, turn the shower on and off without actually being in the tub, or even see your temperature or water flow rate on an LCD display. Of course, this would be dependent on which digital shower remote you choose.

In addition, a digital shower would make you capable of choosing between high and low water pressure settings, and saving preferences for each person who uses your shower, making it customizable and more preferable for multiple people. This is probably one of the biggest benefits, given that it can accommodate the needs of many.

Some digital showers can also save you money as they do not require the purchase of additional items such as a diverter, faucet trim, or additional handles. These handles are sold separately from traditional shower systems and require behind-the-wall work.

Beyond the day-to-day comforts that a digital shower provides, it will also increase the luxury and convenience of your home. A digital shower, particularly when installed in combination with a rain shower or digital showerhead, as well as other features, can increase your property value overall, even just slightly.

What Should I Expect To Pay For A Digital Shower?

Though it sounds like a digital shower would be very costly, that isn’t usually the case. Digital shower installation is one of the more affordable luxury additions you can choose for your bathroom.

While it depends on the unit, what features you opt for, and how involved you want your digital shower to be, you can expect to pay around $240 to $999 for a basic digital shower remote, while installation (depending on how involved it is) could cost up to $1,000 to $3,000. This is because it works in tandem with other items in the shower, such as the faucet or the temperature valves, meaning they would all need to be connected. It would be best to hire a professional plumber or electrician to accomplish this unless you have experience in those fields yourself. You should also look for a professional who specifically offers this type of installation.

Though $240 to $3,000 is already a pretty wide range for a price estimate, if you want to invest in an extremely high-end digital shower setup, you could be looking at a price tag of $5,000+, depending on your bathroom size, the items you want to be installed with the remote, and so on.

What Are The Cons Of A Digital Shower?

As with anything, there are always pros and cons. When it comes to a digital shower, there might be a few reasons you wouldn’t want to install it in your bathroom.

The first and most obvious con is the price. With a typical shower, you would be looking at a fraction of the cost of a digital shower. In addition, a digital shower with an alternating water pressure capability would mean that you are spending on average 10% to 20% more on your water bill. It would also theoretically increase your electricity bill, even if slightly. Lastly, a digital shower will be most costly when it comes time for installation. Though they are not as involved as entire smart shower installations, they can still be very involved and expensive.

If you are not someone who struggles with or feels overwhelmingly frustrated with temperature regulation or not being able to have LED lights or music in your shower, it can also feel unnecessary. In addition, some people simply prefer the appearance of a classic shower. Though the digital shower does create a very modern and technologically-advanced look, some people prefer a more traditional appearance, which could make the digital shower less appealing.

When it comes to choosing the right digital shower for your home, it’s all about preference. Here are some of our top picks for your bathroom, featuring options that are budget-friendly, eco-conscious, and high-end. Most come with the ability to remotely start the shower, control temperature and water flow, though some have additional features and benefits as well, so you’ll need to do your own research for what’s best for you. 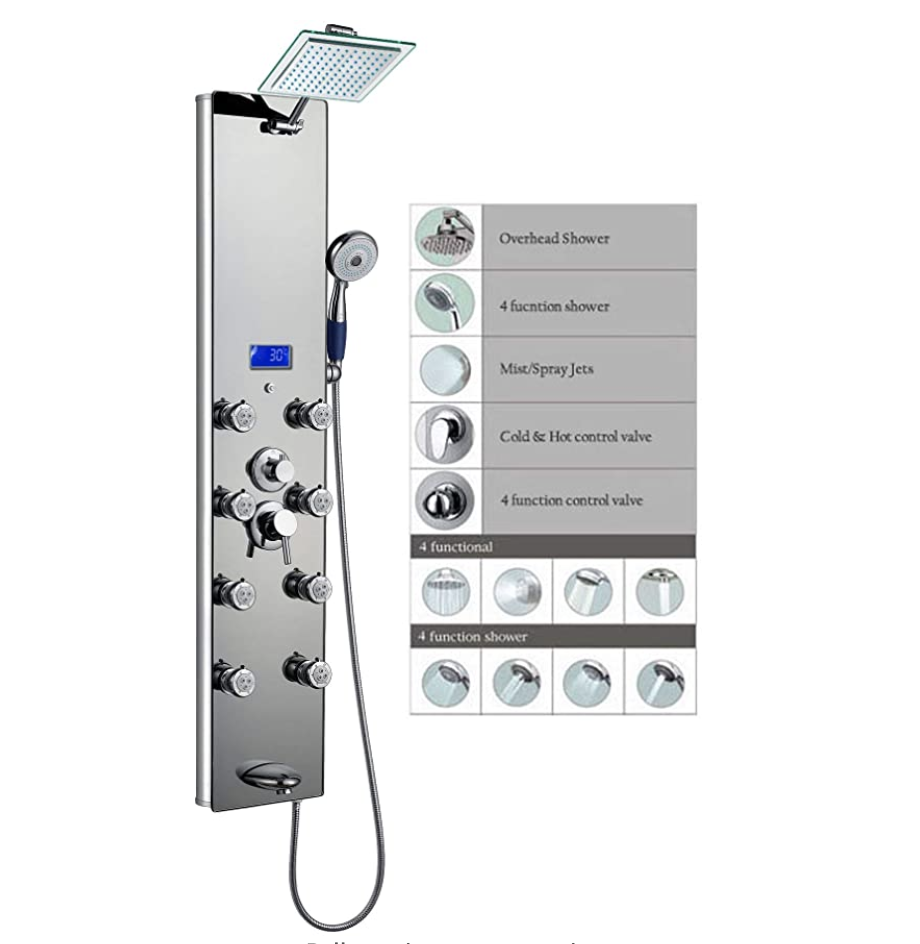 The body of the shower panel is made of high-quality aluminum alloy and it comes with several functions, including an overhead shower, a hand-held showerhead, 8 body massage nozzles, and a tub spout. Two controllers are added to control the functions and water temperature.

This digital shower is on the lower end of the price range, making it a bit more affordable and accessible to a variety of families and homes. The remote is installed on the wall, and there are buttons to turn it on and off, view the shower water temperature, raise or lower that temperature, and change the water flow and spray patterns. 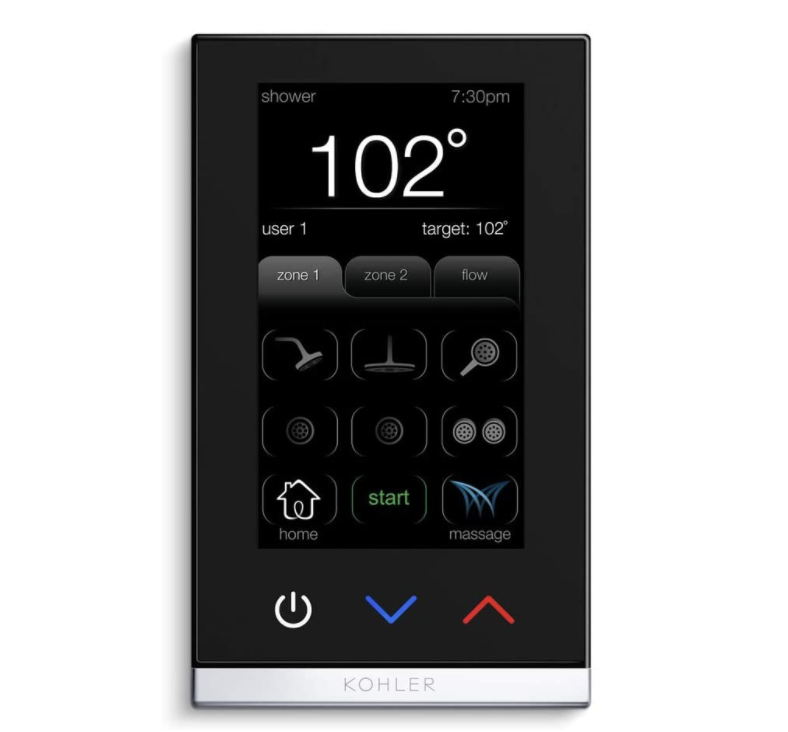 DTV+ is Kohler's most advanced showering system, bringing together four elements - water, steam, lighting, and music to give you a true multi-sensory showering experience. Every element of your experience is completely customizable to your needs and is controlled by this simple touchscreen interface.

This particular option is also eco-friendly, as the DTV digital interface allows you to save water with a water-conserving warm-up mode, a pause function that stops water flow for up to two minutes, and the ability to set a shower duration to reduce water use as well. The interface is easy enough to use and you can pre-set your preferences for water temperature, pressure, and spray pattern. Even children can use the remote, too! 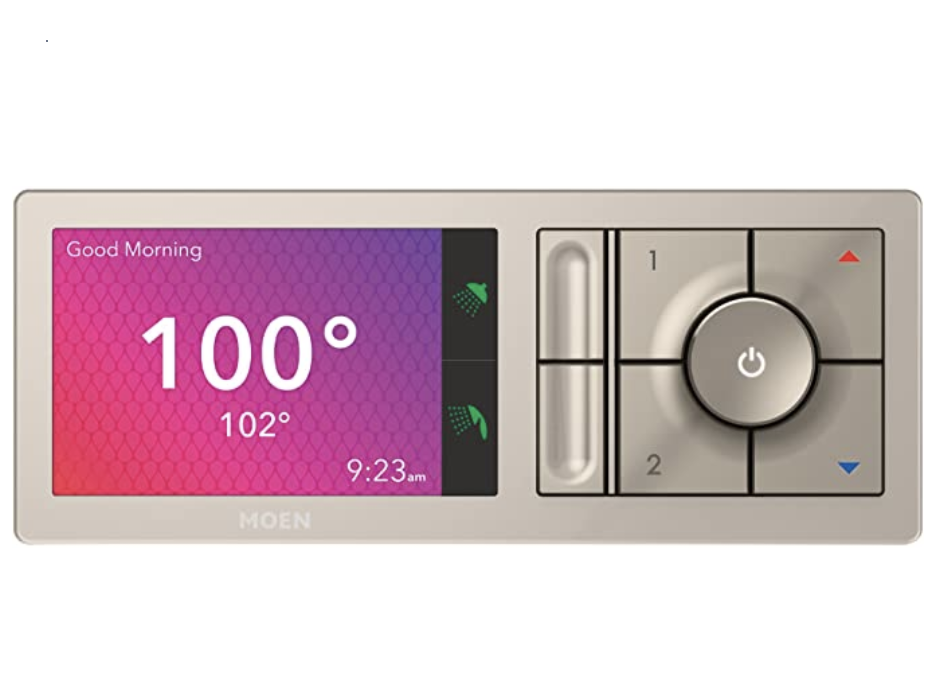 U by Moen shower gives you previously unseen personalization options, perfectly tailored to your needs, such as warming up their shower from the app while still in bed, knowing the water will pause at your preset temperature until you’re ready to step inside.

Although this digital shower looks like it’s just a touch screen controller, your shower can be activated through your voice or a phone too, when connected to WiFi. You can even connect it with your Alexa! The soft-touch buttons allow you to control each outlet, the power, temperature, and saved presets for different users, making it the perfect option for a budget-friendly but still luxurious bathroom upgrade. 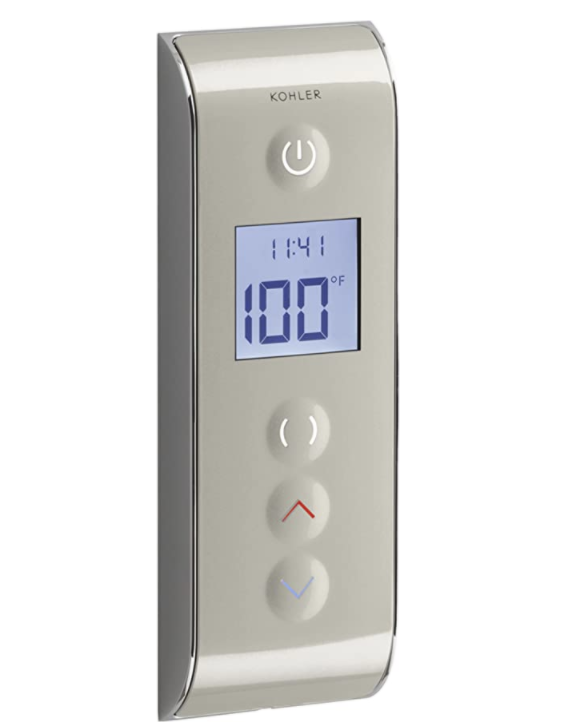 This digital shower is another budget-friendlier option, coming in at less than $300. It comes with an LED screen but utilizes soft-touch buttons rather than a touch-screen, and allows you to control temperature and the on/off button. This option can also control more than one showerhead at once, meaning that you can theoretically have two separate heads wherein one can have cold water, and the other can be warm. This is great for multiple people, or with multiple showerheads. You can also switch from the showerhead to a hand shower with a push of a button. 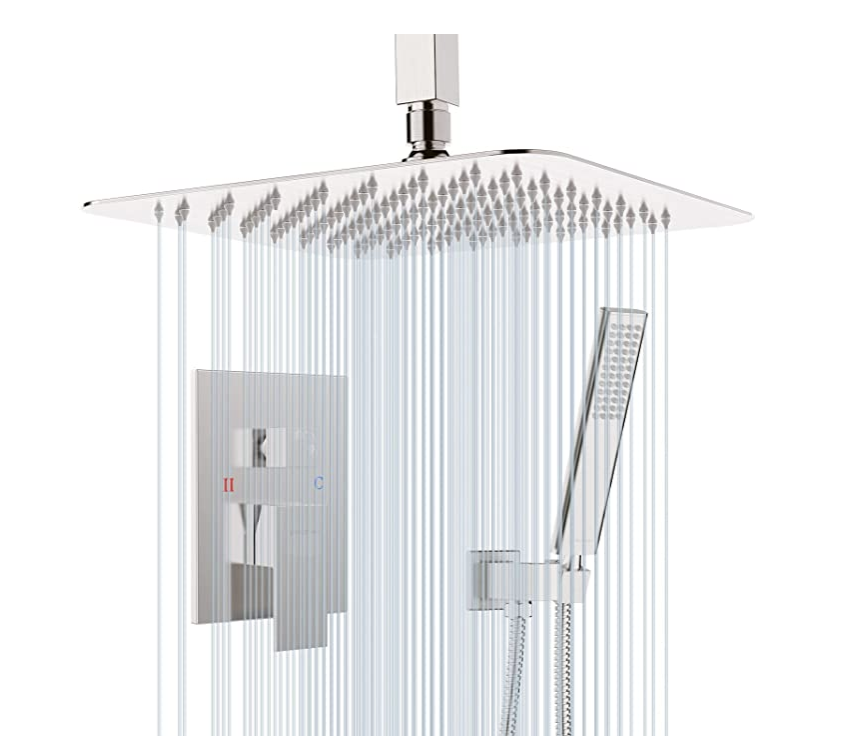 Showerhead with Air Injection Technology conserves water without sacrificing performance. Maintains constant output temperature in response to changes in hot and cold Supply pressure so as to keep you and your family away from scalding.

This is a great shower system if you want something that is a little more eco-friendly. This has air injection technology, meaning that although it’s a high-pressure shower head, it still conserves water without disrupting the performance. With the handheld shower head you can enjoy a nice relaxing rainfall shower too! This would be a great option for those who want to upgrade their bathrooms but are concerned about their carbon footprint or other increased energy use.

Be this as it is, a digital shower can also be a selling point for many families looking to improve the appearance and desirability of their property, especially those who are focused on having every detail as up-to-date as possible. Alexa, turn on the shower!