In David Shields’s new book, Nobody Hates Trump More Than Trump, Shields and his research team painstakingly cull through every word Donald Trump has ever publicly written and uttered. The result? Shields shows us a side of Donald Trump we’ve never seen before or even thought was possible, a Donald Trump that is Dostoevskian—sinister, poetic, offensive, funny, and, oddly enough, self-reflective.

After American Psycho author Bret Easton Ellis got his hands on a copy of Nobody Hates Trump More Than Trump, he said: “It’s the best summation of Trump I’ve come across.” What Ellis saw is that Shields offers a unique analysis of Trump, first as a literary character on the world stage and then as a political actor. He portrays Trump the showman, and than the statesman.

Shields abhors Trump’s politics, but unlike every other commentator out there, Shields first seeks to understand Trump’s appeal—and even his wit—before he begins his takedown. This makes Nobody Hates Trump More Than Trump one of the most riveting reads of 2018 and the ultimate guidebook for liberals in 2020.

After reading the book multiple times at Thought Catalog, we combed through the text and pulled 14 of the most perplexing Trump quotes Shields cited. These quotes will make you think about who Donald Trump really is, and what the man actually wants. 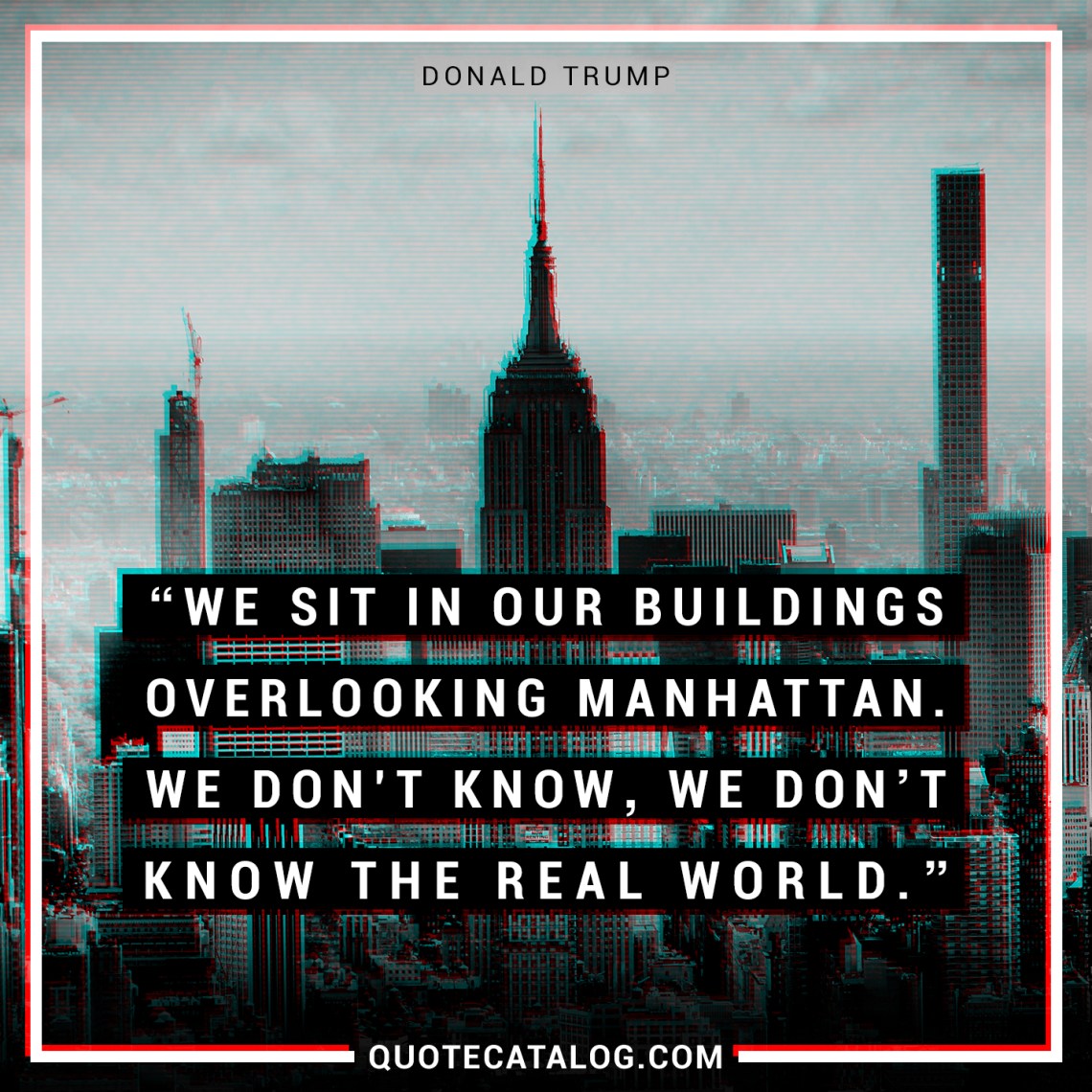 Trump said this on an episode of The Apprentice. It is both nakedly honest and horrifying that the world’s most powerful person confesses to being so detached from the real world. 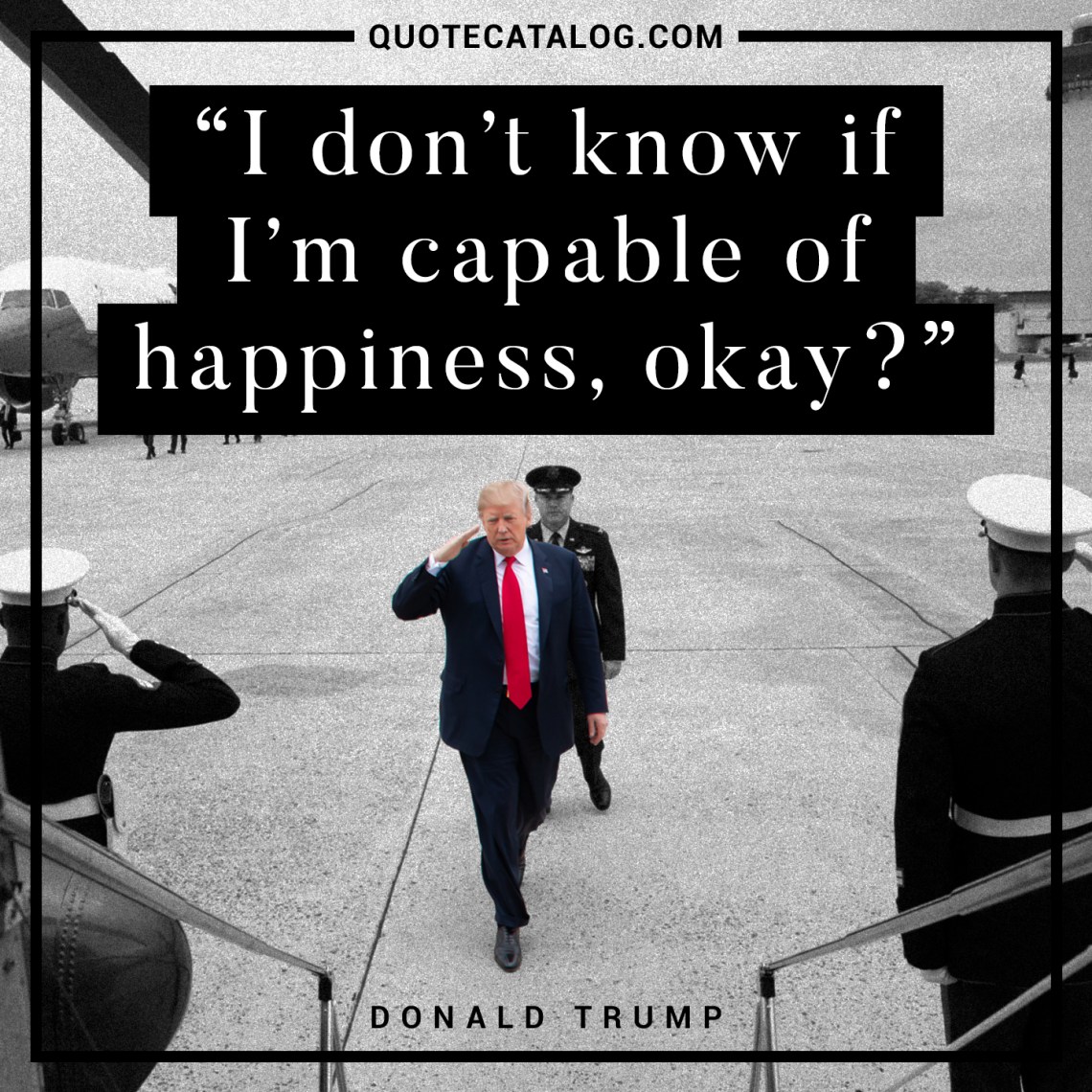 This is the blunt admission of a tortured soul. Most unhappy people at least put up a front to maintain the idea that they’re in some way content, but Trump doesn’t bother: He sees his misery as a feature, not a bug.

3. Trump lacks compassion (and he knows it). 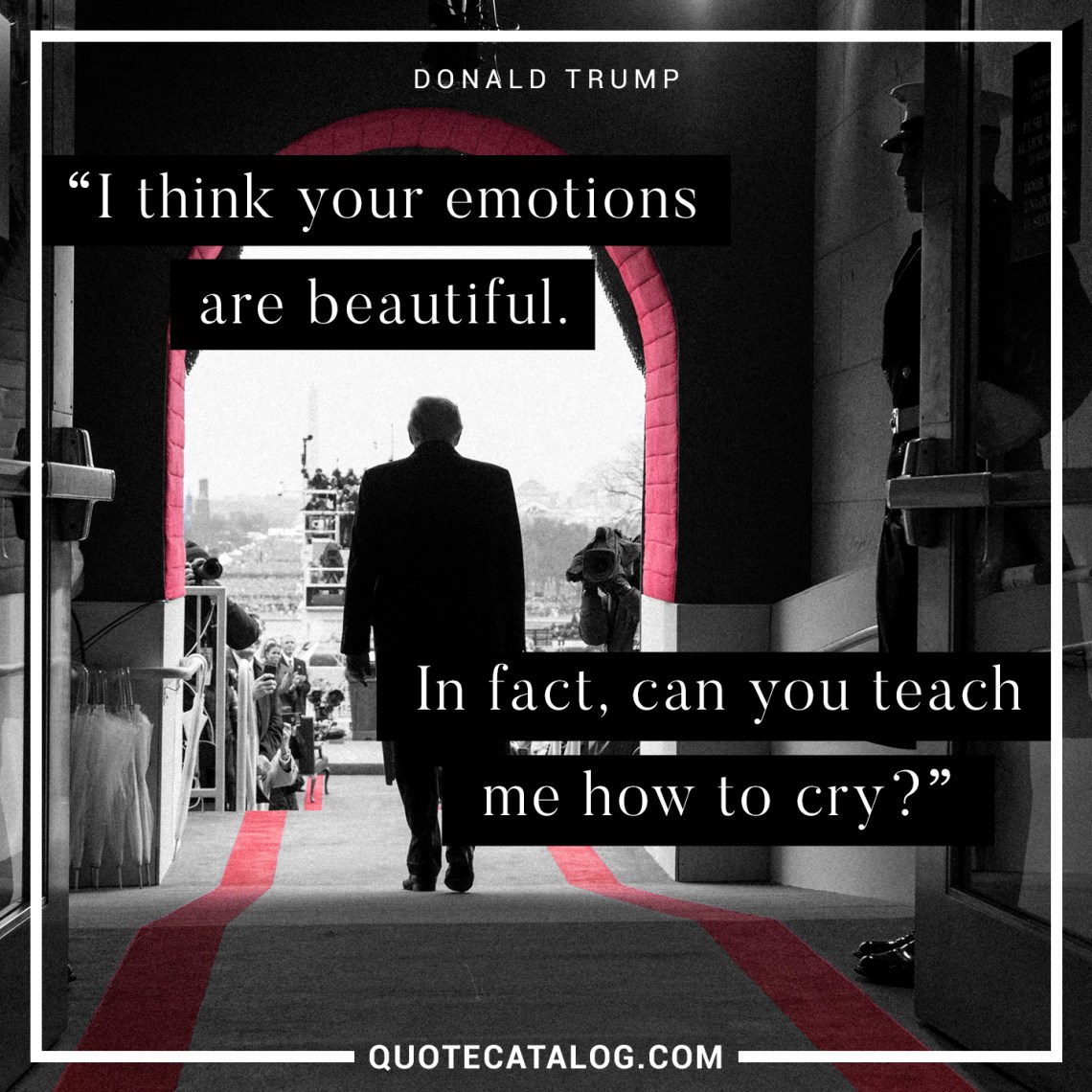 Yet another brilliant nugget demonstrating that Trump isn’t the pure sociopath that his detractors wish him to be. A sociopath would only see crying as a sign of weakness. But Trump finds himself in a hellish limbo—he wants to cry but can’t.

4. Trump sees life as a blockbuster movie he’s supposed to star in. 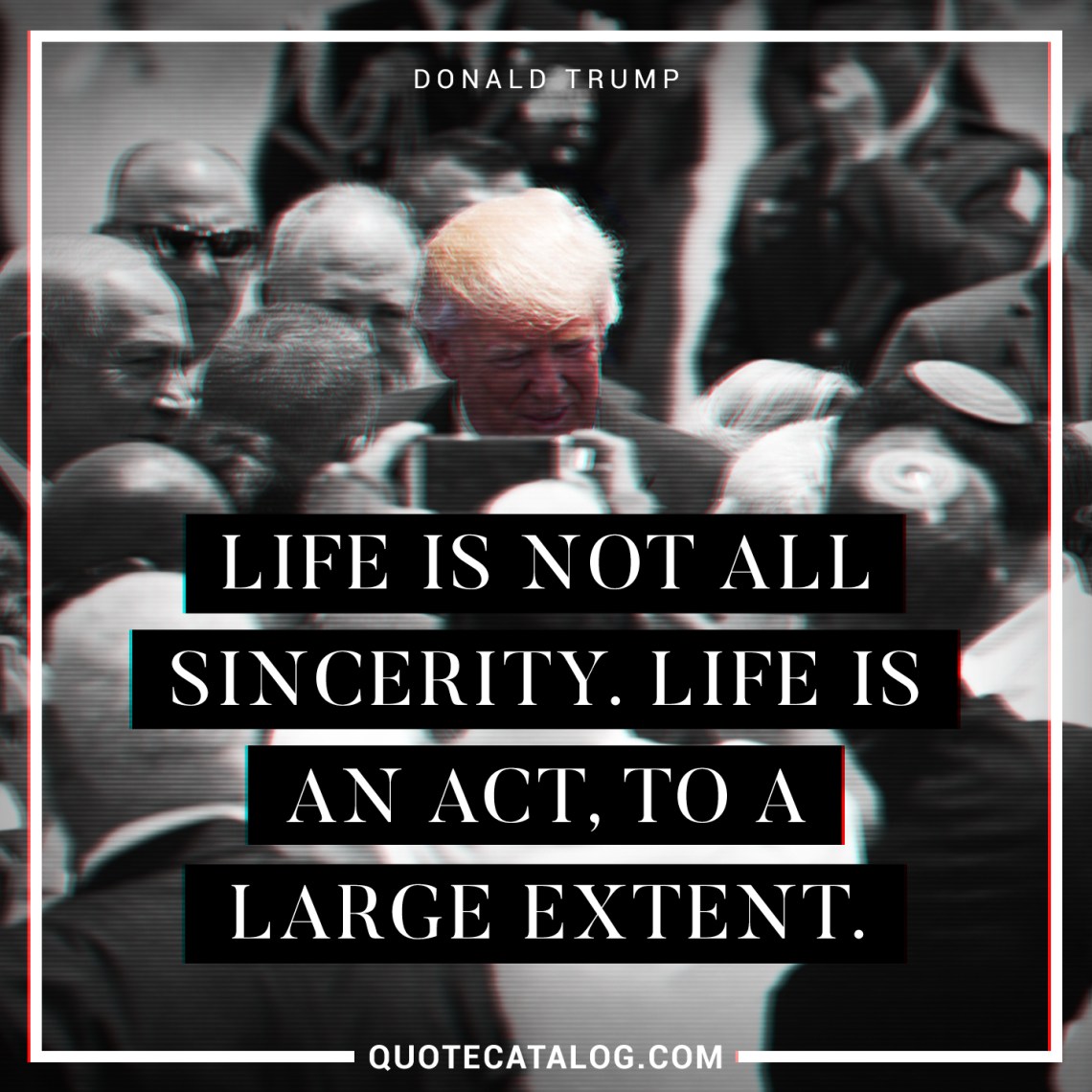 A typical politician would never concede that he tells people what they want to hear rather than what they need to hear. But Trump, like William Shakespeare—a strange bedfellow indeed—doesn’t hide the fact that all the world’s a stage, and all the members of the audience are rubes who bought overpriced tickets to the show. 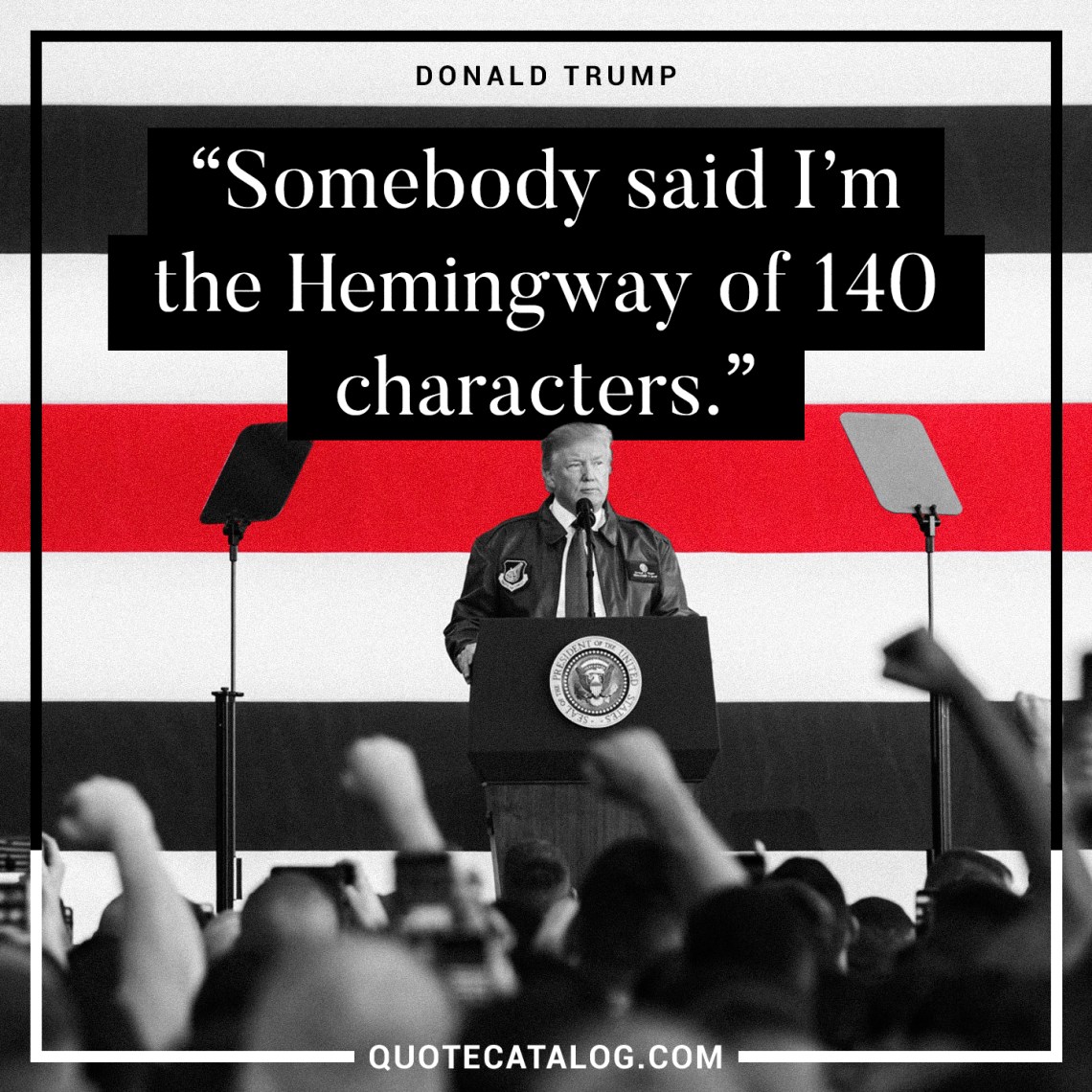 Saying that you’re the most eloquent person on Twitter is like saying you’re the most attractive person at Walmart or the best basketball player in the world who’s shorter than five feet tall. But Trump isn’t embarrassed to brag about something so shallow—in fact, he bathes in shallow water. 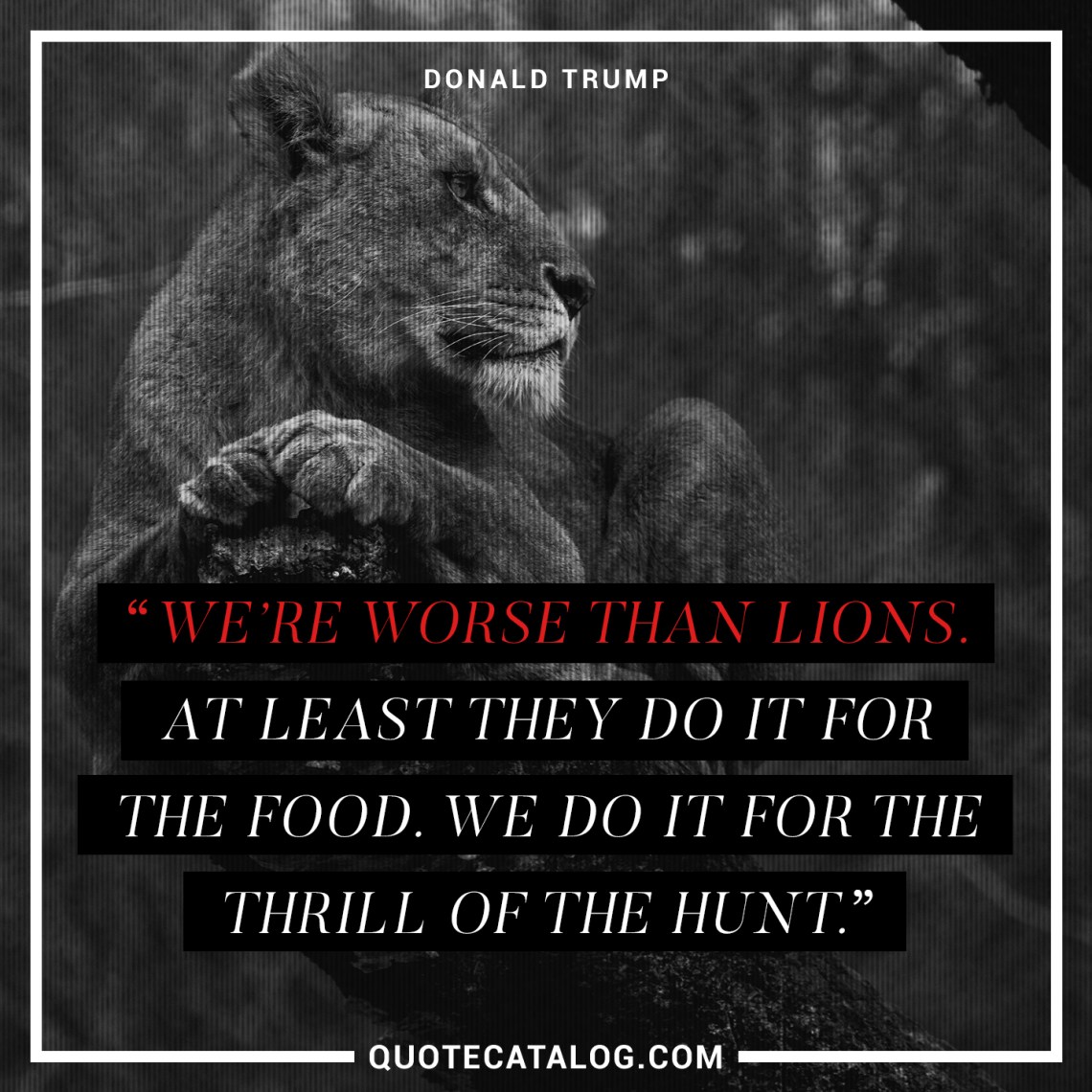 This quote is Darwinian and Nietzschean but with an even more disturbing twist. Trump acknowledges that politics are not only a bloodbath, but he undermines the idea that humans are somehow more noble than animals. Trump sees it the opposite way—humans are the only ones who kill for fun. 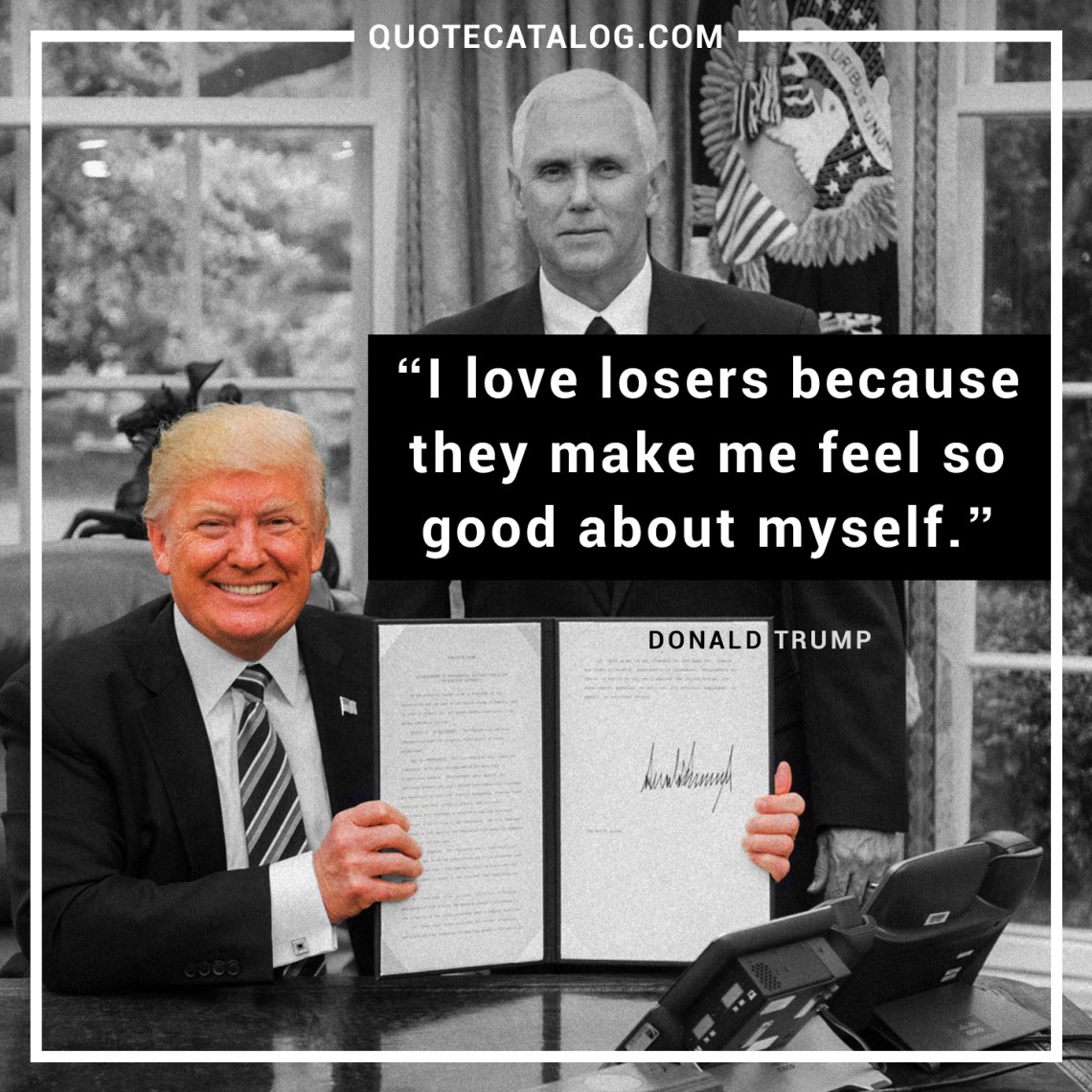 This is the hallmark of every bully and narcissist who ever made someone else’s life miserable. Whereas a normal person takes pride in their own accomplishment, Trump admits he can only feel big by making someone else feel small. It’s a sick thing to admit, but at least he admitted it. 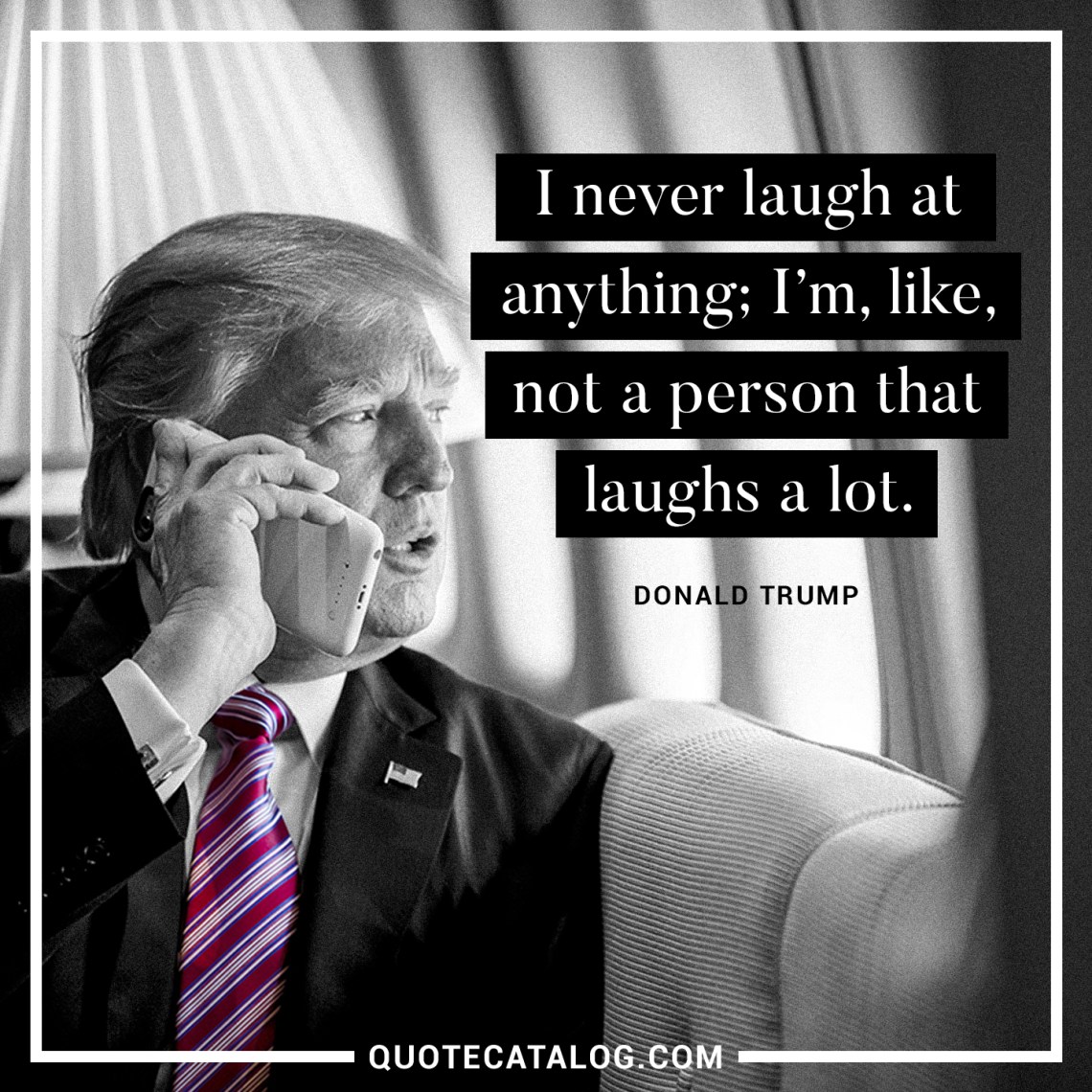 Normally, someone would seek to hide—or at least alter—the fact that they don’t laugh. Trump sees it as nothing more than a trait. There’s something nakedly honest, if agonizingly sad, about admitting that you’d rather have brute power than the occasional chuckle.

9. Trump has zero faith in the system that elected him president. 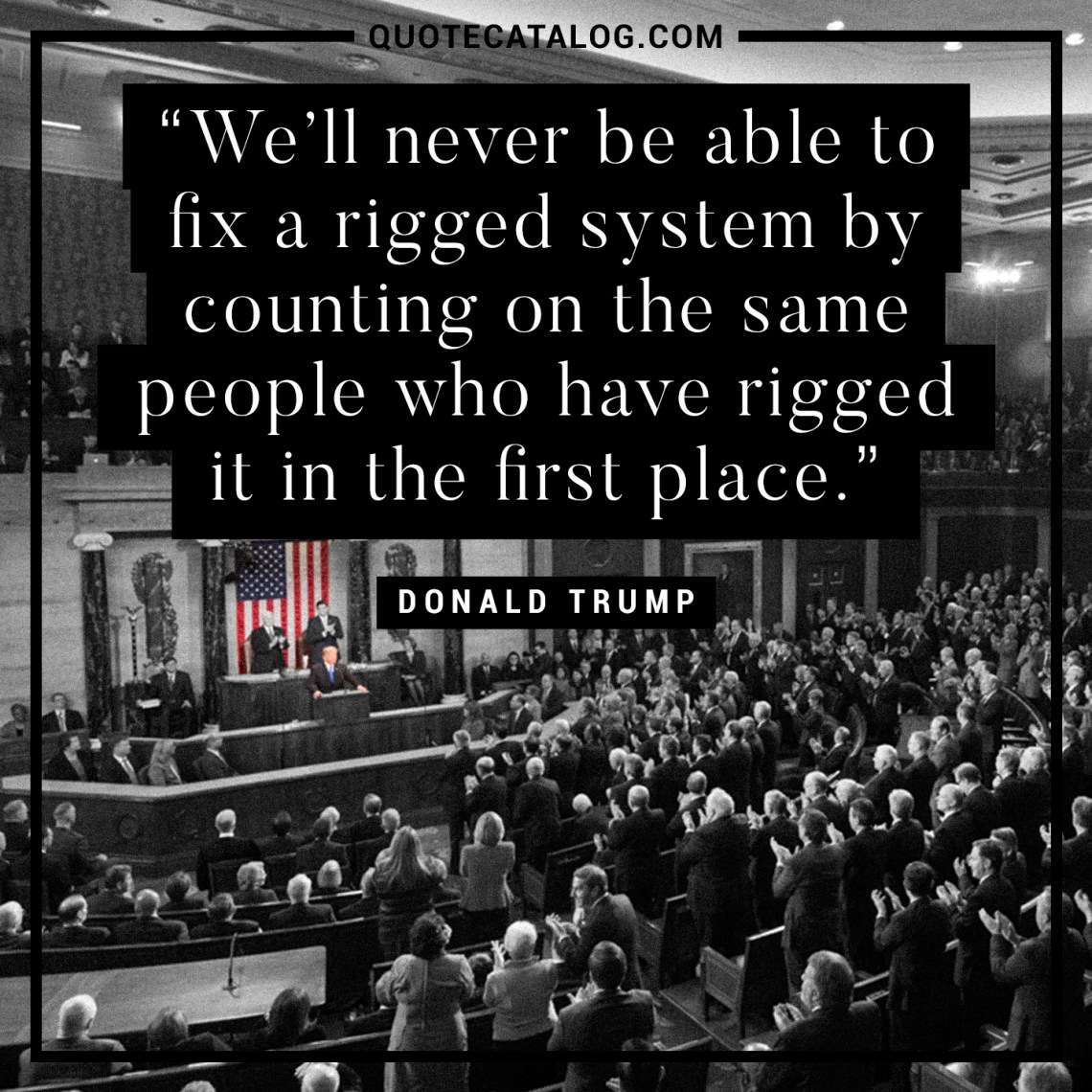 What a startling thing to say for the man at the top of the system he says is entirely corrupt. It’s like the CEO of an auto manufacturer bragging that the cars he produces are unsafe at any speed. And yet he doesn’t mind taking that unsafe car for a joyride. 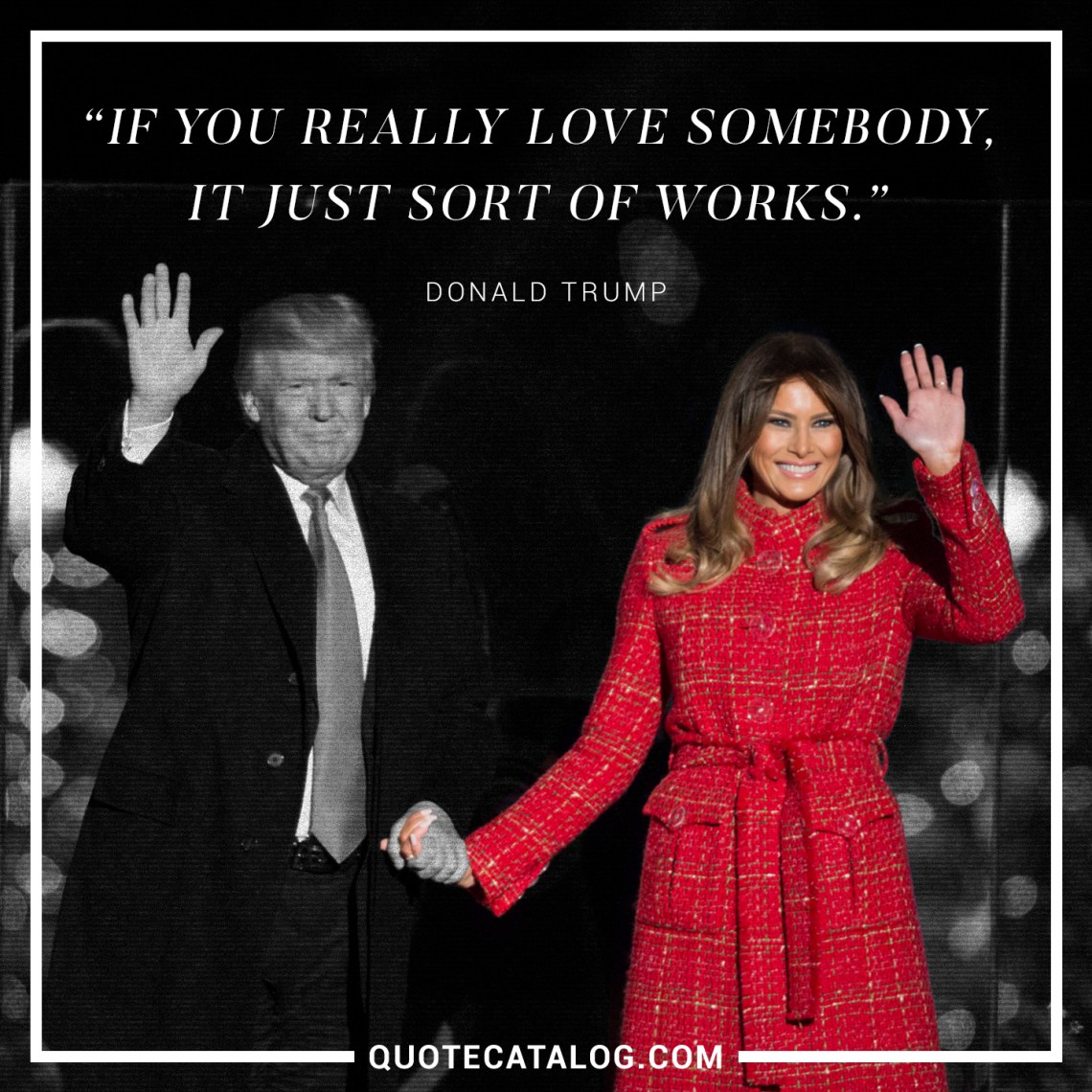 In the case of Trump’s lifelong fetish for Eastern European mannequins, it’s obvious that he sees women as ornaments rather than humans. And you don’t need to work at making an ornament pretty—they just come that way from the factory. 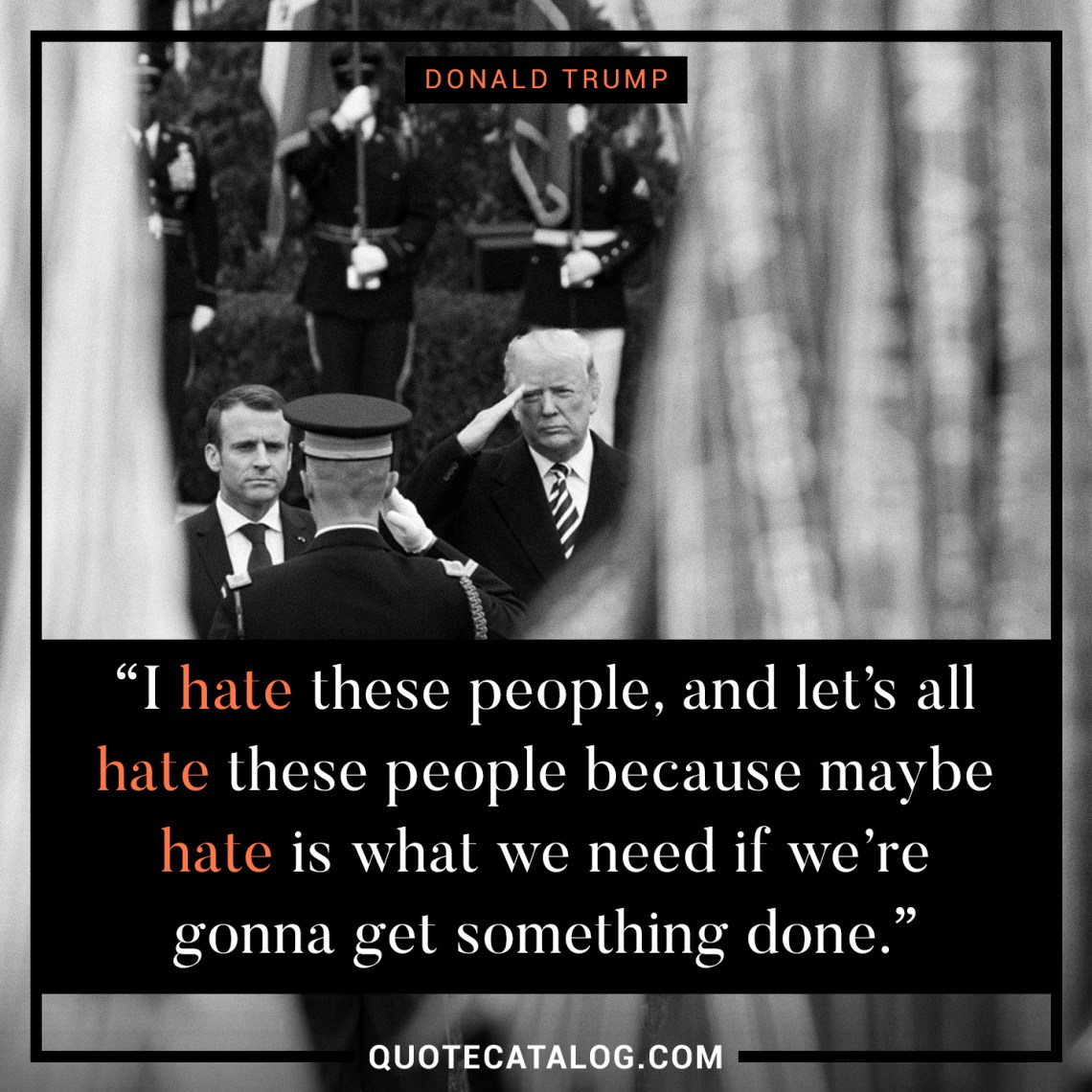 In a world where “hate” is considered a cancer that’s eating away at humanity’s soul, it takes a bit of chutzpah to endorse hate as a strategy. 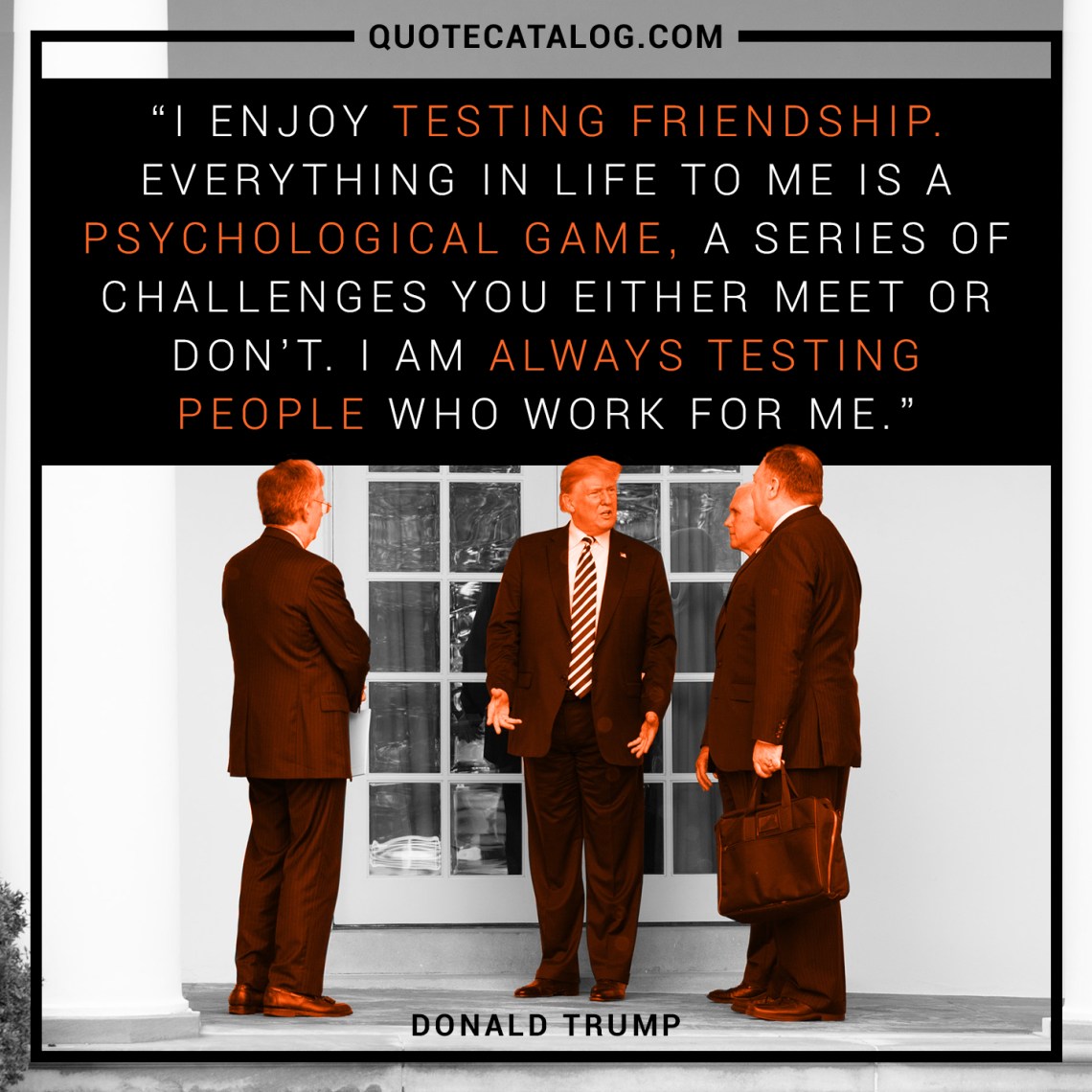 Based on the revolving door that is his administration, it’s clear that Trump trusts no one around him and that they have no reason to trust him, either. 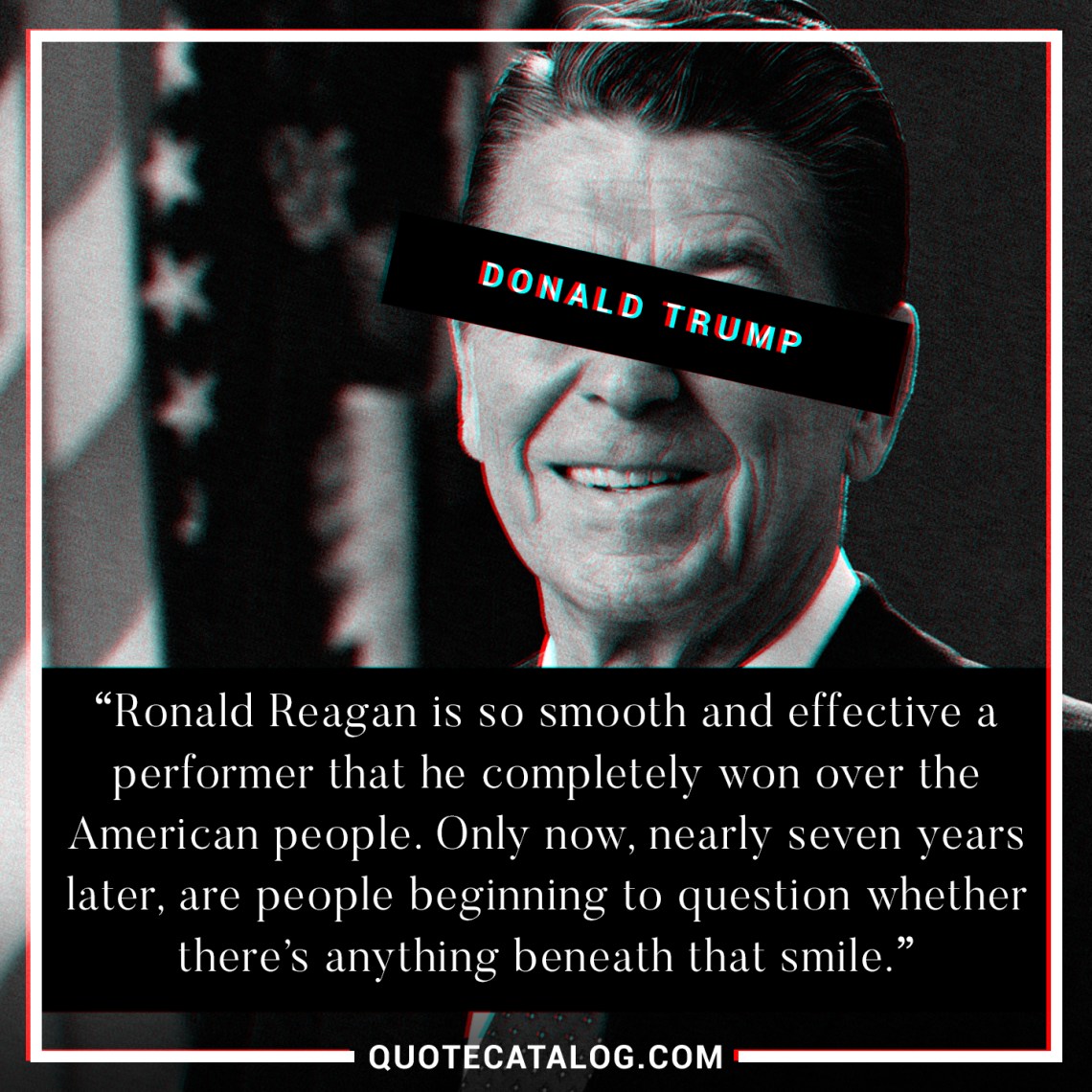 Again he acknowledges that he’s a performer more than a sincere statesman. And he takes inspiration from Ronald Reagan, who first became famous as an actor. But at least Reagan starred in Hollywood movies rather than a reality TV show.

14. Trump cares more about not dying than passing things onto the next gen. 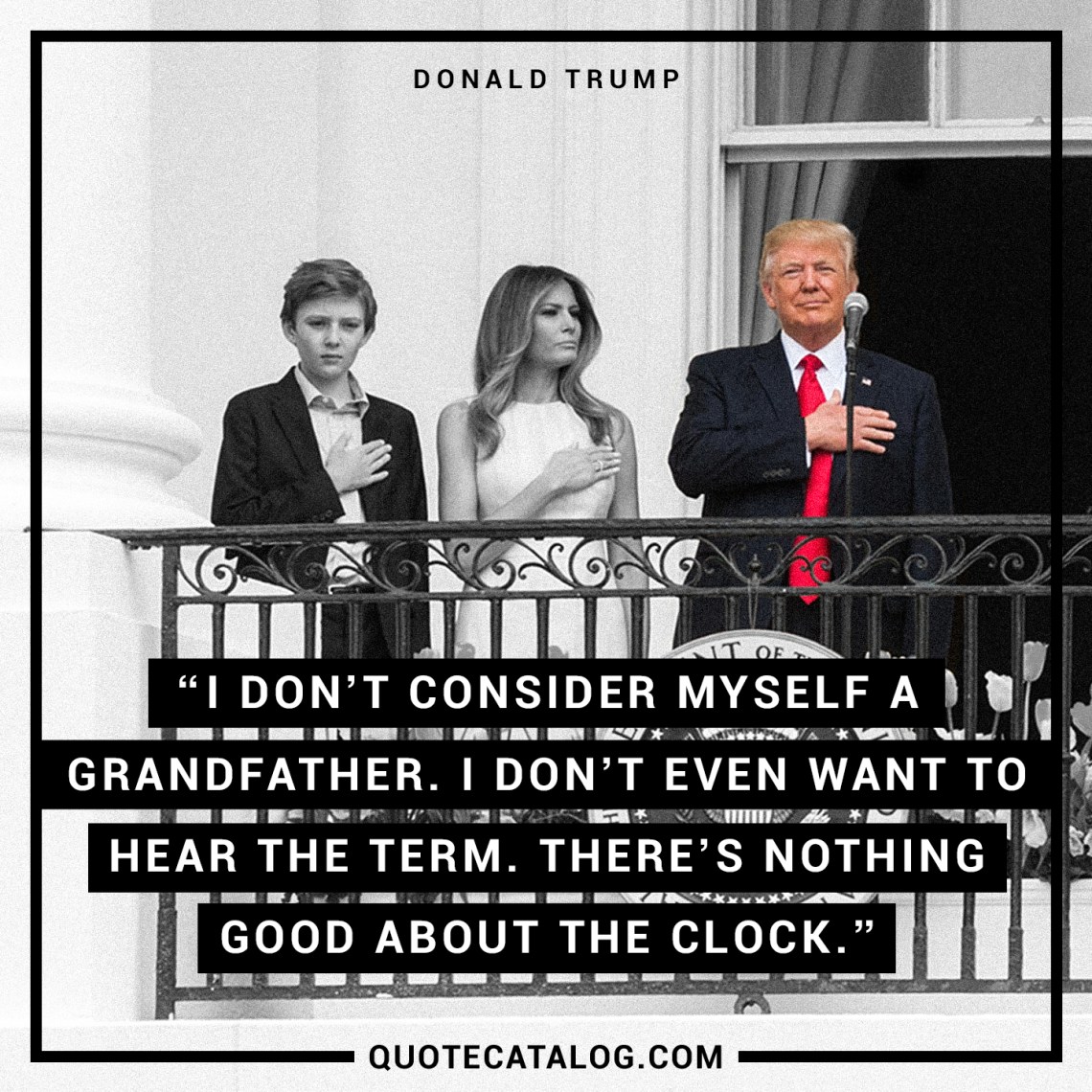 What a shockingly candid way to admit that you’re more afraid of dying than whether or not your grandchildren will grow up happy. But again, he feels no shame admitting it. He may be the first shameless president.