A French last name automatically intrigues. It practically screams, “I am cosmopolitan!” When you introduce yourself with a crisp sounding surname like one from the list below, you grab a person’s attention. Keep reading this page to find some uncommon and common French last names.

Perhaps that’s why so many people seek out French last names to use for characters in screenplays and novels. Whether you’re a writer or just a regular person with an over-active imagination who needs a name for their alter-ego, this list of French surnames is exactly what you need.

French names can either come from the mother or father’s side of the family (though it’s more common to have patronymic surnames) and can either be surnames or first names. Some French last names can be associated with ancestor’s trades or family occupations or based on locations. Some last names are originally from Old French or have a German origin, and so the pronunciation might differ based on its original descent.

Let’s see if you recognize some of these surnames… 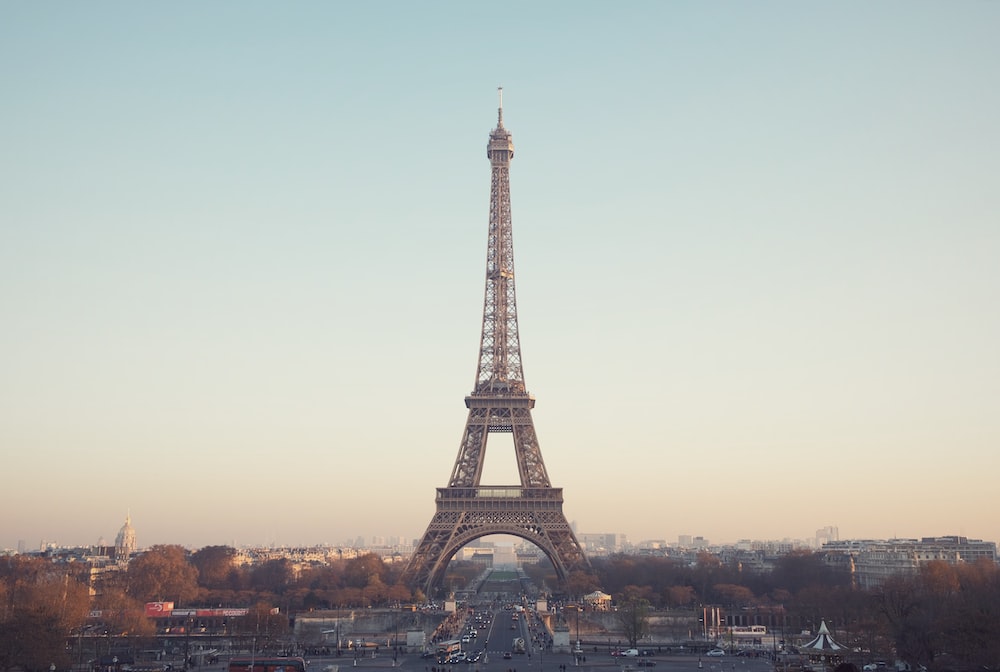 French Last Names Based on Occupations

Boucher – This is a given name is derived from the Old French word “bochier” meaning “butcher.” This, evidently, is an occupational name.

Cartier – This is an occupational name and of Old English origin, referring to a carter, a transporter of goods. This name is typically a boy’s first name.

Charpentier – This word means “carpenter” in French and is also an occupational name of someone who is a fixer of wood. Aka a carpenter.

Charron – This is an occupational name for a tradesperson known as a Cartwright, a person who is skilled in making or repairing wagons.

Chevrolet – This is an occupational name, meaning “horseman, knight.” This is where the Chevrolet Motor Company got its name.

Couture – While this is often used as an adjective, this is a metonymic occupational name for a tailor. It comes from the old French word “cousture” meaning “seam”, or in Latin, meaning (con)sure (“to sew together”).

Fabron / Favre – These are occupational names derived from the Old French word “fevre,” meaning “blacksmith.” Therefore, this is a surname for someone who could have been a blacksmith.

Fabreau – This is an occupational name for someone who was a grower or seller of beans.

Gagneux / Gagnier – “to farm, to cultivate”

Garnier – meaning “keeper of the granary” aka a storehouse for grain.

Granger – This is an Anglo-Norman occupational name meaning “farm bailiff”

Lefebvre / Lefèvre – The variants of this name originated from an ironworker or smith.

French Last Names Based on Locations

Some French last names focus on locations, like where someone lived or lived near. This can also include their status, too. These surnames include the prefix “de,” “des,” “du,” and “le.” For example, one name you might stumble upon in your search is “Fontaine,” meaning someone who lived near a well, spring, or another water source. Here are some common and popular French last names you just might recognize:

Bélanger – This given name derived from Normandy, the region of ancient France, and the Anger family who lived there. The previx “bel” means “beautiful” and Anger (or, also common, D’Anger) was a surname of someone who lived near or in the former province of Anjou. This name could be associated with someone who was from this beautiful place.

D’Aramitz – This given name is associated with a person who originated from Aramits, a town in the French Pyrenees. This town may be derived from Basque, an area that straddles a part of north-central Spain and south-western France.

Deforest – This place-name is derived from old French, associated with someone who is from a place named Forest. For example, Nord or Somme. Other French names associated with the forest are Dubois, Forest, and Forestier.

Favager – This is a locational name, indicating that a person was from the town of Faverges in eastern France. In French, “faverge” means “forge.”

Fontaine – this is a name that is also a girl or boy’s first name meaning “fountain’ or “water source.” There is also associated with the last name De La Fontaine, which means someone who lived near a spring or a well.

Lavigne – In French, “vin” means “wine”, and in old French, it was spelled “vigne.” Therefore, this is a surname for someone who lived near a vineyard.

Lyon – This is a locational name of someone who lived in the city of Lyon, France. 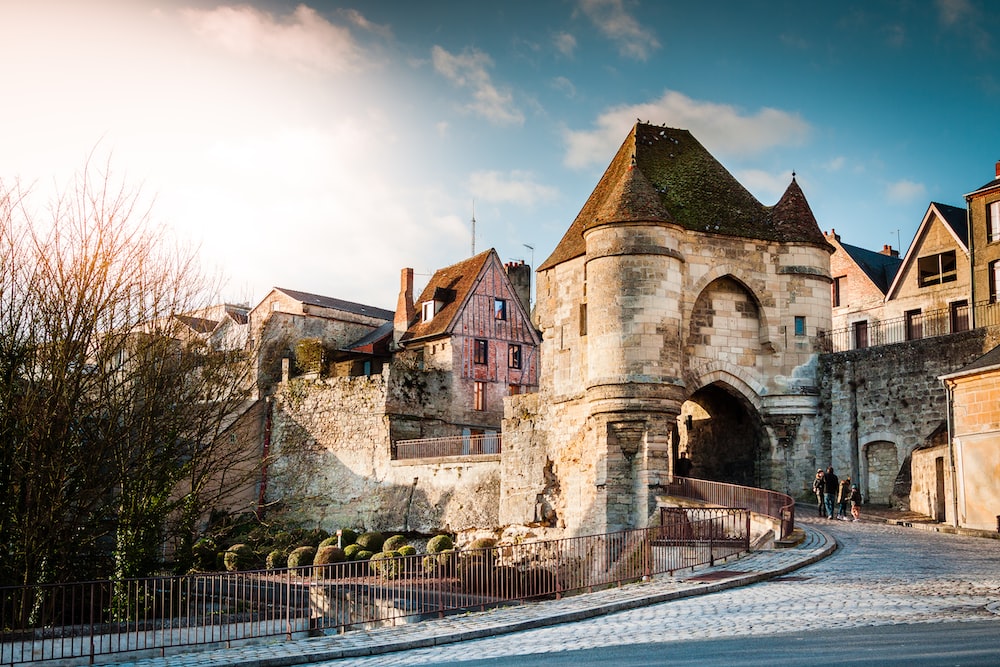 There are a handful of French words that are a variant of popular surnames. One old French word is “beau” or “bel”, both meaning “fair, lovely, beautiful.” Other French words (prepositions, mostly) you may find in these surnames are “bonne”, “des,” “la,” “le,” and “du.”

Beaulieu – This French last name takes beau or bel (lovely) + lieu (place), meaning someone who lived in or near a lovely place.

Blanc – This is a French word meaning “white.”

Boivin – This surname is a combination of French words “bois” (verb meaning “to drink”) and “vin” (wine). This French last name refers to someone who drinks a lot of wine.

Deschamps – “from the fields.”

Descoteaux – This locational name is derived from a person who lived in a hilly place. In French, “coteau” means “hillside, slope of a hill.”

Desjardins – This locational last name is based on the plural of French word Jardin, meaning “garden.” This is habitational, for someone who lives near or in a garden. Another French surname is Gardinier, meaning “gardener.”

Desroches – someone who lives near or among rocks.

Desrosiers – someone who lives among rose bushes.

Janvier – This is the French word for “January.”

French Last Names Based on Appearances

Blanchett – Although this given name means “blanket,” it originated as referring to a fair-haired person.

Bonnaire – From the old French phrase, “of good appearance,” this surname refers to someone who is gentle, courteous, or handsome. It is also an English and Scottish name. Another variation of this name is spelled “Bonnay.”

Bouchard – This is a Norman name with Germanic elements, typically given as a first name. This is often a nickname for a person who has a big mouth, because of the French word “bouche” meaning mouth, and the suffix “-ard.”

Charbonneau – This is a French surname (and nickname) for a person with dark hair and/or dark complexion. This is based on the old French word “charbon” meaning “charcoal.” 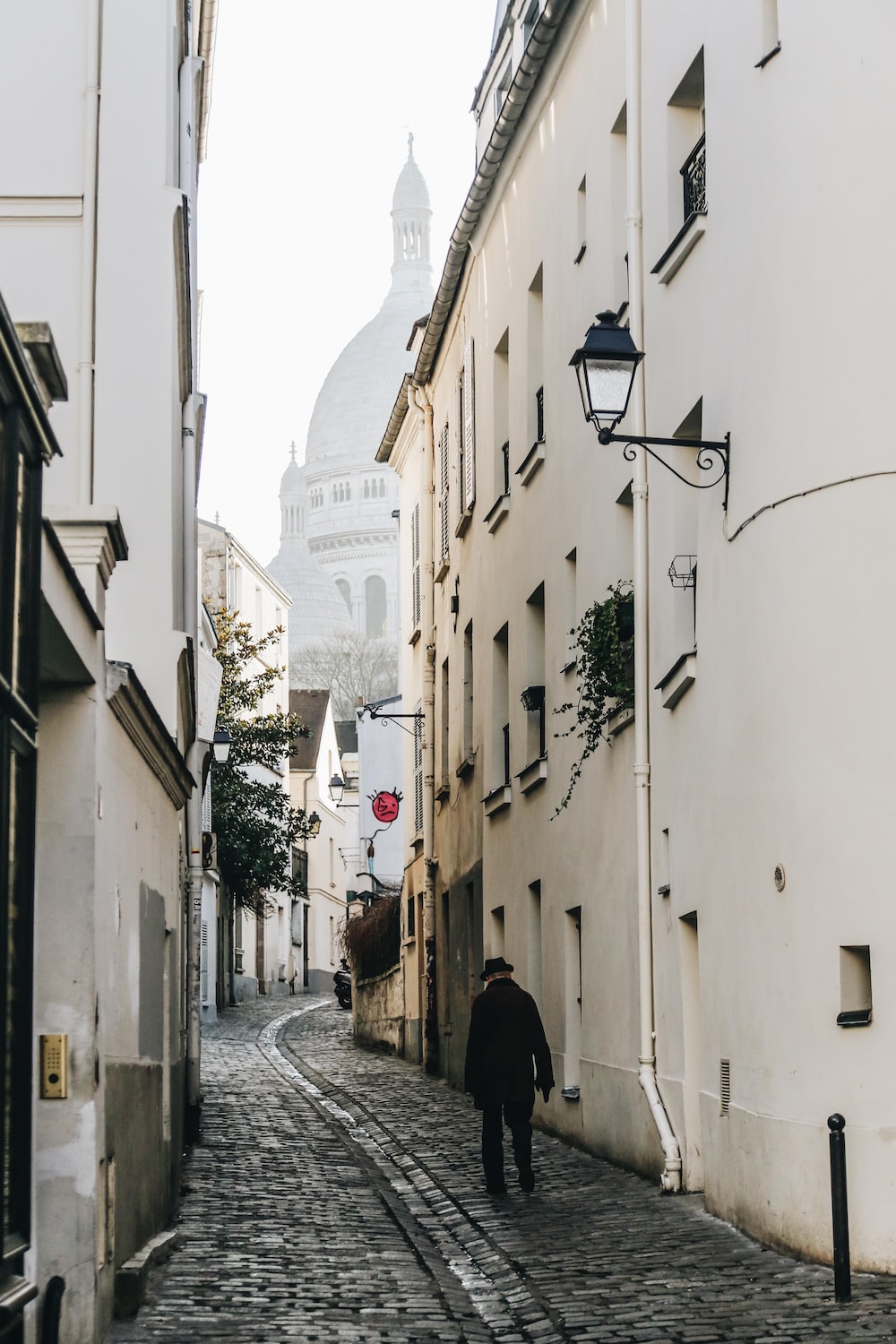 Due to the history of invasions, many French last names have a German origin or have some form of German word in it.

Albert – This name originated from German descent but is also associated with the French. It is composed of the Germanic elements “adal” (noble) + “berht” (bright or famous). This can also be a first name.

Augustin – Not only does this name originate from German descent, but it is a medieval surname of Biblical origin, too. It is derived from the pre-Christian name Augustus meaning “sacred.”

Baudin – This Germanic personal name is also a nickname, associated with someone who is bold or brave.

Berger – This last name is an occupational name for a shepherd. It also has a German origin, deriving from the word “mountain” or “hill.”

Marcel / Marcelle / Marcellus – Not only is this last name French with German origins, but it’s also a name used in Romania, Poland, and Italy. It means “belonging to Mars.”

Barre – This old French name is derived from places called Barre, and each one has a different meaning within itself. For example, Barre-en-Ouche in Eure or Barre-de-Semilly in Manche, it means “obstruction,” “bar,” or “gateway.” In another place, Barre in Lozère, it means “height.”

Beauchêne – This is an old French name used in medieval times, which could mean “high” or “tall” but also could mean “lovely” + “oak” (chesne)

Chastain – This is an old French name meaning “from the chestnut tree.” This surname may have two associations: a person who lived near a group of chestnut trees or a person with chestnut-colored hair.

Firmin – This Old French given name is often associated with St. Paul and the early Christians, who was ordered “to be steadfast in the faith.”

French Last Names That Can Be First Names

Abel – a Biblical first name and derived from the Hebrew language. This name has two very different meanings: “breath” and “son.”

André – This name is typically passed down from the father’s side of the family, derived from the Latin name Andreas. This is a name for someone who is “courageous.”

Blaise – This French and English name may be both a surname or a first name meaning “to lisp, to stammer.” This is an ancient Christian martyr name too.

François – This is commonly a French first name meaning “freeman.” This name is of Latin origin and has similar forms and spellings: Francis, Francia, Franco, or Franc.

Martin – This is a name that can fit as both a first or last name. It stems from Mars, the Roman god of war. 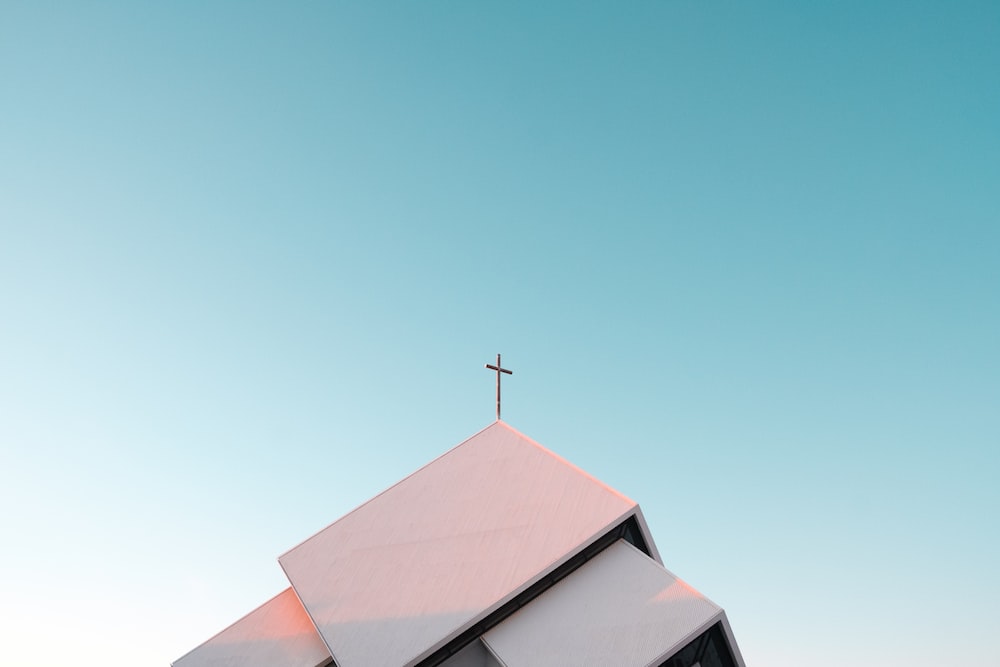 Delacroix – This given name derives from “de la Croix” meaning “of the Cross.” The pronunciation of this surname is “del-a-croy.”

Gosse / Gosselin – This surname derived from Normandy during the Middle Ages. It comes from a name meaning “the little god.”

Lachapelle – This is a topographic name from “the chapel,” which may have meant someone who lived near a chapel or church.

Michel – Not only is this a French name, but it is also of Hebrew origin meaning “Who is like God?” There are variations of this name, including Michael, Michelle, and Mitchell.

Marie – This French name is often used for baby girls. It is a variant of the Latin name Mary, meaning “star of the sea.”

Lévêque – This old French last name translates to “bishop.” It can also be associated as a member of a bishop’s household.

Marion – This last name originates from ancient Medieval France, but more specifically, a place called Breton. It is a name for someone who was/is devoted to the Virgin Mary. In Hebrew, it is written as “Miryam,” meaning “wished for child.”

Hardy – This name, quite literally means (in Old Frankish), “to make hard.” In French, it means “bold” or “courageous.”

Jordan – This is a given name of Hebrew origin meaning “to flow down.”

Laurent – derived from the word “laurel,” this name is associated with the laurel leaves on crowns that victorious, powerful leaders wore in ancient times.

Langlais / Langlois – “Anglais” is the French word for “English,” so this surname quite literally means an “English man.” Langlois refers to “the English.”

Larue – With the article “la” and “rue” (the street), this is a topographic name for someone who lived beside a road or street.

Leandres – This is a combination of two French first names: André (courageous) and Leon (lion). This name is typically given to boys, meaning “lion-man.”

Lécuyer – In French, “écuyer” means “shield-bearer.” This name is derived from someone who belonged to the social rank immediately below the one of a knight. The pronunciation of this name is “leh-coo-yeah-er”

Savatier – the occupational name for someone who is a maker or seller of shoes.

Segal – the occupational name for a grower or seller of rye. 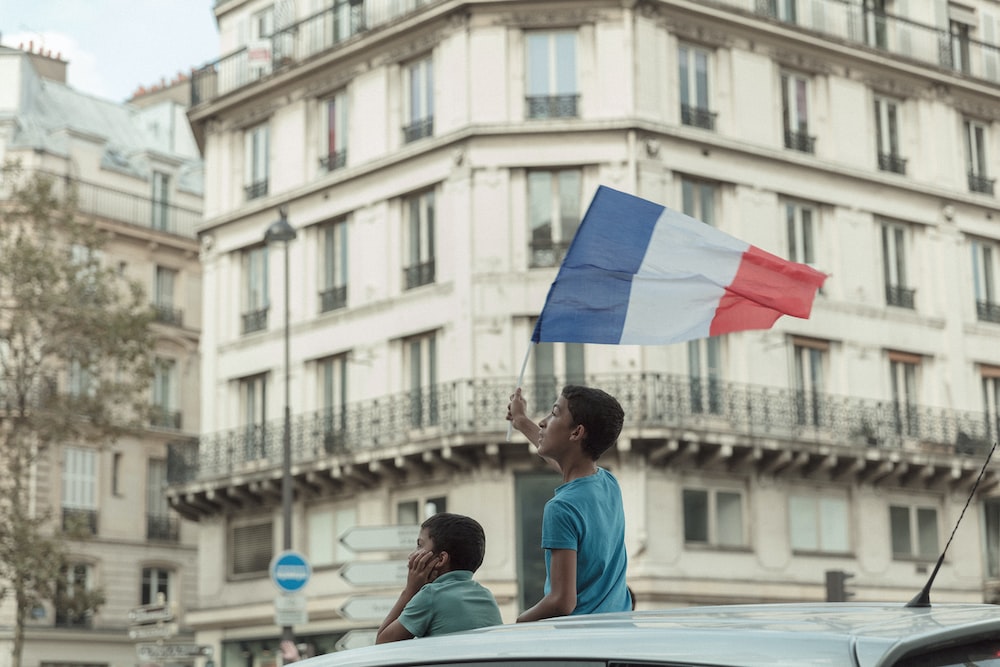 Do you have a French family name?