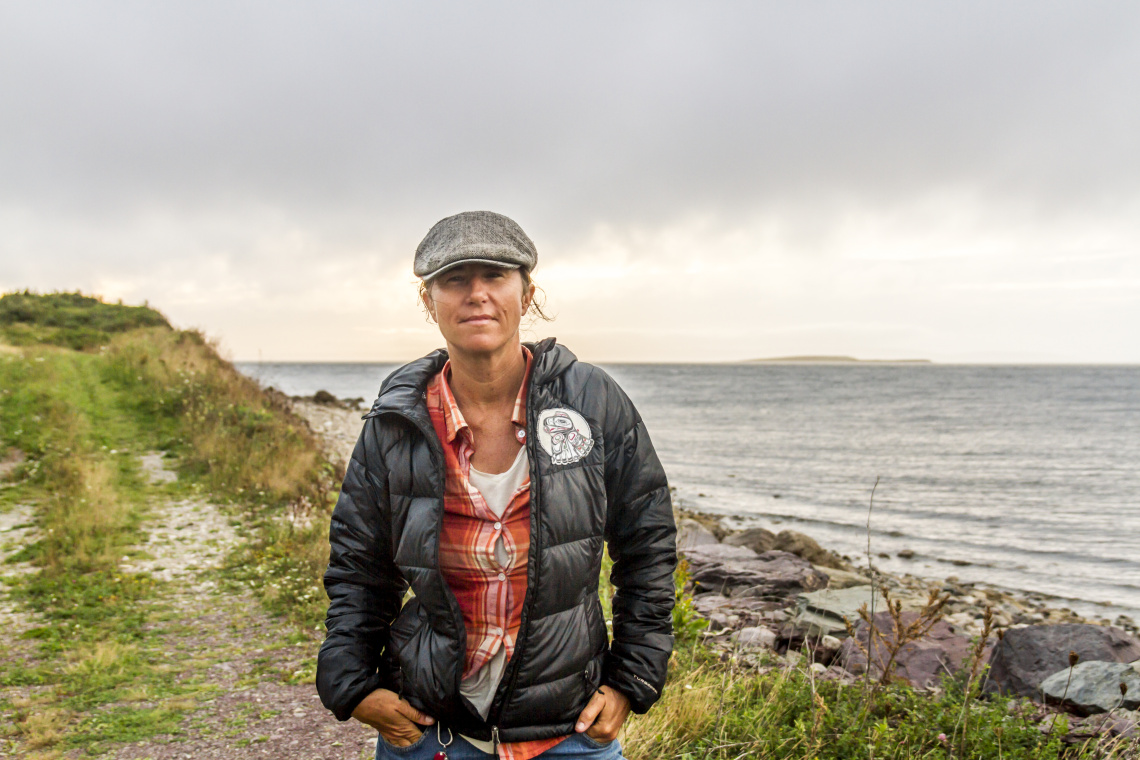 I am surrounded by friends and humans who are healing this world by doing what they love — but there is one woman in my world who could very well be Zeus, throwing her pitchfork into the heavens capturing my awe with every step she takes.

I had the extreme honour of finding my legs as an artist interning under Dianne Whelan — an award winning filmmaker, author and artist.

We met kayaking on the Sunshine Coast.

I was still rooted in a sales job in Edmonton at the time I hated, serving and bartending. Sitting in a show suite in a suite with white cuffs.

My tolerance for living a life inauthentic to me was slowly dwindling and that day in the water I asked, “How did you do it? How did you just become?”

“I followed my heart, ” she replied. “I believed in myself.”

She found out that a group of Inuit rangers and military went on a sovereignty mission by snow mobile to the Northern most point of Canada to plant a flag each year. She wanted to go and capture the story.

She rang them up and asked if she could capture the journey and story.

They said no and hung up the phone.

She called back and said, “I’ll write a feature article for Outpost magazine, write a book and film a documentary.”

“Do you know how to ride a snow mobile?” they asked.

She went on to tell me of teaching herself to drive a snowmobile in the arctic. Waking up to polar bear tracks outside her tent.

My eyes bugged with anticipation and my heart beat at it all.

Her journey of the mission “This land” won several awards and was one of her first projects that established her feet in the eyes of this world.

She went on to be the first woman to film a documentary on Everest “40 Days At Basecamp” where she captured what she claims is a metaphor for human ambition. Stories of dead bodies and garbage cluttering the walls of Everest. Oxygen tanks being stolen. Everyone wishing to rise while stepping over this Earth and each other.

That year upon meeting her I decided to up and quit my jobs and Edmonton and haul over to British Columbia.

I wanted to write and begin to move into my vocation and wasn’t sure what my path was — but I knew that Alberta had long stopped being my path and it was time to live amongst a land that gave me joy.

I contacted Dianne for leads on jobs in my background and she said, “Sure. But why would you try work back in sales when you want to be an artist? I need help with the book I’m launching and social media, why don’t you come work for me?”

I still remember jumping 6 feet into the sky on my driveway in Edmonton, feeling like I was an amateur photographer who had just landed a gig photographing whale sharks with National Geographic.

Dianne was it — in spirit and soul and she was also a success while staying true to her art and all she is.

I moved immediately to a small cabin on the Sunshine Coast of BC and once or twice a week drove North to sit across from her and learn everything I could.

4 years ago sitting across from her she would say things like, “Call National Geographic and see if they will do an interview on my next book.”

A few weeks later we’d have an interview set up in Canadian Geographic.

She is my piece of paper. She is my first and most powerful mentor.

She’s also been my belief and baseline for integrity and honouring the art, above all else.

She’s wildly independent and walks this Earth with the full power of the messages she wishes to share within her journeys, books and films.

She is currently hiking the 24,000 km Trans Canada trail in Canada filming and writing her story under “500 Days In The Wild”.

She’s been on the journey for 2.5 years and anticipates to be walking and paddling and biking for another 2-3 years.

The majority of her journey is solo, but she links with filmmakers and friends who fly in to walk for a week or so with her.

Every day she smudges for one of the missing aboriginal women on the trail, and says a prayer.

She’s been collecting a lot of wisdom about our connection to this earth and ourselves and this morning I rang her to ask a question of my own about business integrity — she held space lovingly, filling my eyes with tears.

Then I shut my mouth, opened my ears and wrote as fast as I could:

This journey and walk is a search for lost wisdom. I began this because the world has stopped making sense to me.

The old way of living is the earth is sacred and the water is sacred — you were living with it, not upon it.

Now a days we live upon it.

There are no other Earths, this is the only living planet. I’ve heard there’s other earths but I don’t see any. Our earth is home to 7 billion people and we are destroying it.

This is the role of women, right now.

There’s only one planet.

It needs to be protected with the same fierceness that we protect our borders.

When I left I was like “We’re fucked” but this journey has given me hope.

I’m not going to accept this.

The elders I’ve met who have given me hope. The way isn’t another tax break for green energies or a recycling program, the way is going back, going back to living with the earth. These programs are great, but it is our minds we need to shift, our perception, our relationship to the earth.

“When I left I thought the old way was the method of my travel, walking, paddling, but the old way I was taught by Mikmaq elder Danny Paul is what I carry in my heart. In the woods with every step saying, the earth is sacred. With every paddle stroke, the water is sacred. That is the old way.”

We need to teach and remember and reconnect the old myth of our earths sacredness.

There’s been great break throughs with western thought but the wisdom now needs to guide the technology and science.

The science and technology right now makes a mockery of wisdom and intuition.

Science and technology is supposed to work for the heart and the goodness of us, not to enslave us and destroy us.

I also feel a need for the spiritual rights and equality of women to walk in this world louder.

These messages are not my messages, these are the messages of our elders and this world.” – Dianne Whelan

If there is any woman you want to follow and listen to as closely as the creeks babble and the wolves cry, it’s Dianne.

She is a matriarch, a torch holder and she is creating a path and shedding a light on the change we need to heal our world.

Her work shakes my spirit awake and aliens me to the only sacredness worth knowing.