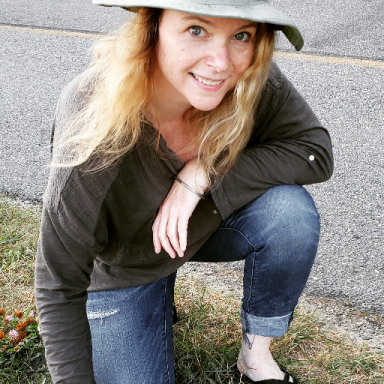 I was a disheveled and ungainly adolescent. I probably had ADHD, though if my mom were still alive, she’d scoff and disagree with me. “You just needed to get your act together,” she might say, and then her distant look and heavy sigh would belie her words.

Year after year there was difficulty, and it’s name was Janet. Mom saved my report cards, and when she moved from our house in Utica she gave them to me. “Daydreamer.” “Peer problems.” “Disruptive.” “Poor listener.” “So much potential if she could finish her work.” My teachers proffered their complaints every semester. I haven’t thrown these treasures away yet, but I’m going to.

I was convinced that Mom didn’t love me as much as she loved my siblings. Whether it was report card day or an ordinary day, I got clipped, exasperated lectures, which she delivered through a clenched jaw. “Why did you do that?” was usually followed by “What’s wrong with you?” I answered the same way every time. It was a dance we endured, both relieved when it was over. Through tears, I would answer the sincere “I don’t know” and the desperate “It’s too hard for me” and the plaintive “I wish someone would just be nice to me for a change!” My inability to focus and my social inattention made me unpopular. This was implied by all the frustrated sighs, the lunch detentions, and the invariable ridicule of other kids.

I know now that my brain was defective. In the context of brain science, my brain got input and feedback that reinforced its shape, size, and malfunction. My limbic system and amygdala overcompensated, keeping me in a tense, disorganized, and emotional state. Physical maturation helped some. Decades later, I learned how to intentionally shape my brain with physical activity and meditation. Holding conscious awareness will increase the density of the frontal lobes after just two weeks of daily practice, so says my late teacher. Meanwhile, the limbic system and the amygdala becomes more streamlined, more organized. The frontal lobe becomes a better filter for what those survival structures need to react to. Anxiety decreases, the body is at ease, decisions become intuitively natural. It opens the door to the flow states and peak experiences that self-actualizers hope to practice.

Then there’s muscle memory. Using a broom is something that one simply does not forget how to do after it’s mastered. It begins with episodic memory stored in the hippocampus, which directs the motor cortex to move the body parts. The muscle tissue cells don’t actually store memories; it’s all in the brain. The brain loves automated habits—it doesn’t actually like making decisions or having to relearn sweeping whenever one grabs a broom. Muscle memory is an efficiency perk.

Oh, my poor, young, faulty brain, which hadn’t yet developed the muscle memory for legible handwriting or enough regular pathways for attention and focus. I didn’t have the capacity to straighten up and fly right.

Upon reflection and by report card record, I realized that during the times I was physically active (team sports, swimming lessons, aerobic classes with my Dad), my grades, peer issues, and teacher’s comments improved. It is well known that even gentle exercise produces overall wellbeing. It stimulates the brain, particularly enhancing the left prefrontal cortex, and it creates terabytes of space for the hippocampus to store memory. I didn’t live for athletics, and it wasn’t pushed on me, but I still benefited at intervals. Although it would be incorrect to say I was never happy, it’s just a fact: Life was most often a struggle.

There were a few great reprieves from my difficulty: Music, reading, riding my bike, swimming, and roller skating. Skating gave me wings. I was good at it, and the music was always right at the roller rink in my town. I could skate for days. I forgot everything when I was there, and there was nothing to struggle about. I had moves that total strangers asked me to teach them. I could skate backward for laps and I never got tired. Afterward, I would feel relaxed, focused, and capable. I daydreamed about winning a competition and proving my significance, waiting for the next time I’d have wheels on my feet and music all around me.

The rink closed my sophomore year of high school, and though I had not skated in a long time, I still felt a pang of loss. I meant to go skating again for years, somewhere, sometime, and maybe join a derby team, but I didn’t. Eventually my memory of skating became a well-burnished piece in the halls of my own museum of time.

Finally, on a recent Saturday, I got to go roller skating. My beloved, his daughter, and her friends piled into the car and rode an hour to a skating rink that was much like the one where I learned. I was so excited to try again as a physically conditioned adult that I broke a lace on my rental skates. After a wobbly 10 feet, my wheels met the smooth rink floor. Muscle memory, in all its miraculous mystery, seized my bones and my old wings returned. They were now bigger and more splendid than any angel’s. Gliding, weaving, speeding, grooving, turning—it was all still there and then some. I didn’t stop but for a moment now and then to check in with my people. I spent almost the entire two and a half hours with the breeze in my hair and my awareness on my body moving. I also could feel my face smiling from the inside out. I couldn’t help it. The movement was the purest kind of euphoria.

Eventually, it was time to take off my skates. I sat with my beloved while we waited for the girls. As I floated down from the ceiling, I became aware of the way he was looking at me, pleased and bemused. I thanked him and stammered how special the whole experience was and how grateful I felt and almost ugly cried right then and there.

We stopped for pizza, ate our fill, and turned toward home. I watched out the window, awash in at least three kinds of pleasure hormones, plus gratitude and affection. The miles ticked by in the dark, and I drifted to thoughts of ruling the rink as a 12-year-old, ‘80s music, my mom, and the time the kids unhooked my bra while an eighth grade boy was flirting with me. Wait—what? I sat with the memory. Other memories surfaced, so I observed: When they stole my shoes and hid them, when they exposed themselves to me in the coatroom, when they said cruel things daily, and when they excluded me. I met all these memories with equanimity. These things didn’t hurt and hadn’t hurt in ages. I’ve put this all behind me, I puzzled. I’ve outgrown these thoughts. You did, said my inner voice, so take the compassion you’re owed. It wasn’t ever completely your fault. You had to manage alone, but you held fast to something that took you out of it. That’s gritty as gunpowder and tough as old hickory. I stared out the window at the shadows whizzing by in the dark, and my eyes filled. I’m proud of you.

The soul knows what the brain doesn’t. Happenstance muscle memory plus a consciously developed prefrontal cortex and a well-primed endocrine system might be the scientific version of my Saturday afternoon, true. The other version is that a kid got another chance to use her wings at a time when she didn’t even need them and found that she always did indeed fly right.

It doesn’t matter if I skate again. On that last lap around the rink, I thought, If this is the last time I skate, I’ll always feel grateful for this time, and that is enough.

I have an irrational fear of dehydration unrelated to how often I cry.