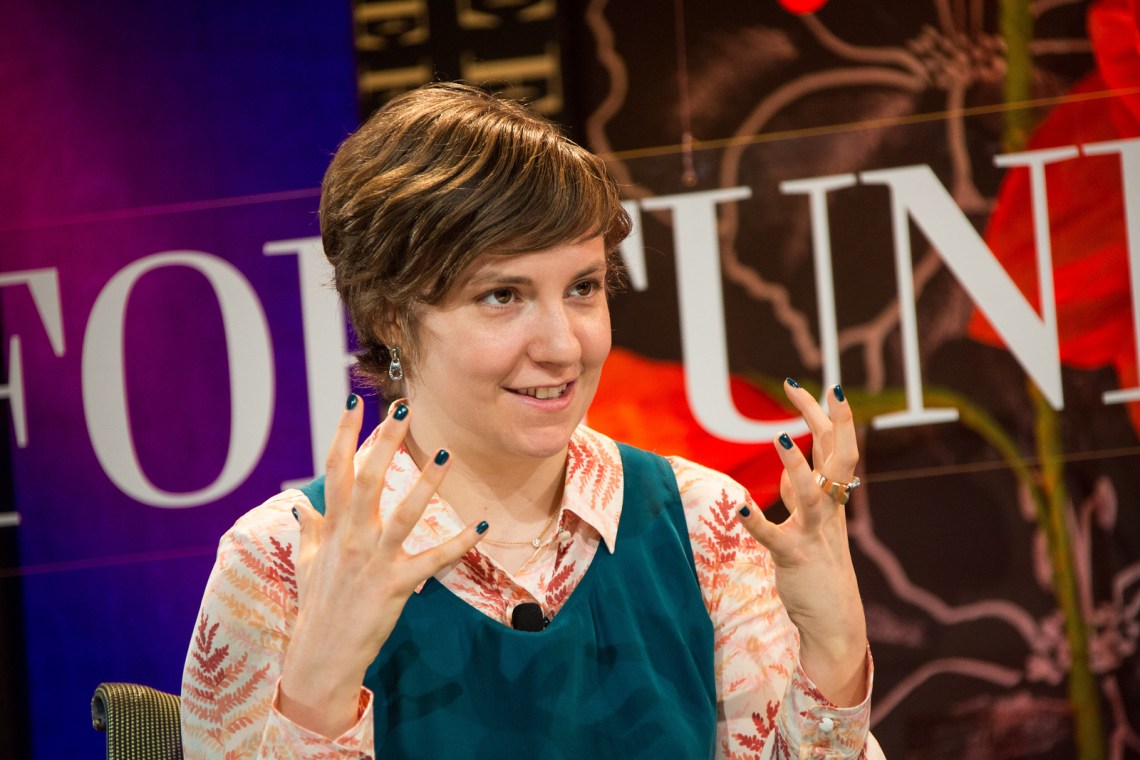 We have a problem in North America with overzealous adults responding to normal, harmless childhood behaviors, particularly those involving anything even remotely sexual with what amounts to hysteria. Kids suspended from school for making pretend guns with their fingers, kids getting hauled up on sexual harassment charges for kissing a classmate’s hand, and kids put on sex offender lists for the time-honored tradition of mooning. So when I first heard about the Lean Dunham “sex abuse allegations” all I heard was that at 7 years of age, she examined her little sister’s vagina and discovered some pebbles buried within. Kind of icky, but well within the realm of what young children do. Like eating boogers. Gross. But perfectly normal.

Interestingly, most of the media sites defending Dunham stay focused on that specific episode between the sisters when Lena was just 7 years old. Both Slate and Jezebel ran defenses of Dunham that failed to mention the other episodes of sexual contact either with or near her sister. Given that the events are described by Dunham herself in her own words in a book she wrote, it stands to reason that Dunham should be capable of facing questions from the media and people in her life as to just what happened between her and Grace. If Dunham’s words are being taken out of context, by all means, she should have the opportunity to clarify them.

It’s hard to imagine how she might clarify “… anything a sexual predator might do to woo a small suburban girl I was trying” or “as she grew, I took to bribing her for her time and affection: one dollar in quarters if I could do her makeup like a ‘motorcycle chick.’ Three pieces of candy if I could kiss her on the lips for five seconds. Whatever she wanted to watch on TV if she would just “relax on me”

“I shared a bed with my sister, Grace, until I was seventeen years old. She was afraid to sleep alone and would begin asking me around 5:00 P.M. every day whether she could sleep with me. I put on a big show of saying no, taking pleasure in watching her beg and sulk, but eventually I always relented. Her sticky, muscly little body thrashed beside me every night as I read Anne Sexton, watched reruns of SNL, sometimes even as I slipped my hand into my underwear to figure some stuff out,”

but fairness and justice dictate she be given the chance to explain just what those passages are describing. I will give Dunham credit for not embellishing or outright lying in what she purports is a work of nonfiction.

In the meantime, here are 6 reasons why the allegations of abuse against Dunham might be true.

1. Most children are abused by people known to them.

86% of children who experience childhood sexual abuse are attacked by someone known to them, and the concept of “stranger danger” is thus very misleading. When Princeton University and the Brookings Institution took a careful look at child abuse statistics (PDF p. 172), they discovered that “among victims of sexual abuse coming to law enforcement attention, more than a quarter are victimized by a family member, while 60 percent are abused by someone else from their social network. Only 14 percent are victimized by someone they did not already know.” It would be entirely consistent with what we know about childhood sex abuse that if abuse was taking place in the Dunham home, a family member would be the perpetrator.

2. Sexual abuse between siblings is not that unusual.

The rates of sexual abuse between siblings are extremely difficult to track precisely because there is a certain, normal developmental curiosity about bodies and parts between same sex and opposite sex siblings. When social worker Dr. Margaret Ballantine explored the issue of sibling incest in depth, she found that “sibling sexual abuse is the least recognized form of incest, while sexual abuse by related adults in a family receives the most attention.” Part of the reason it’s difficult to track these instances of abuse is that victims often don’t see themselves as victims and “older brothers or sisters may take advantage of the sexual naïveté of younger siblings to initially trick them into incestuous behaviors. Sexual behaviors are frequently couched in the context of play, and young victims are likely to find these activities pleasurable.” That is certainly consistent with Dunham offering bribes to her little sister in the form of candy or preferential TV programming, and Grace’s response to the accusations against her sister are also consistent. In a series of tweets, Grace offered no vigorous denial or defense of her sister, but rather subtly implied that she was not harmed by whatever took place. Indeed, she neither denies nor confirms that she was harmed, but rather reserves the right to decide that for herself.

3. It is common for the abused to defend their attackers.

Back in 1973, a bank robber in Sweden took some hostages and the standoff with police took place over the course of several days. By the end of the situation, the hostages had befriended their captor and demanded his release. This tendency to “trauma-bond” is now known as Stockholm Syndrome. It is commonly understood that victims of domestic violence will vigorously and physically defend their attackers when police arrive on the scene, protecting the women and men they love, despite the abuse. What is less commonly understood is that “[children] subjected to an ongoing sexually abusive relationship may be susceptible to the development of this syndrome.” RAINN has an easily accessible explanation of what Stockholm Syndrome looks like in the context of abuse, including a victim’s tendency to have positive feelings for the attacker and negative feelings toward figures of authority who might hold the attacker accountable. Grace’s tweets in support of her sister are arguably rather tepid but still consistent with Stockholm Syndrome.

4. Children exposed to graphic pornography are more likely to be abusers.

Both of Dunham’s parents were employed in occupations that included graphic representations of human nudity. Her father was a painter who specialized in luridly colored depictions of human genitalia while her mother, a photographer, “filled the family home with nude pictures of herself, ‘legs spread defiantly.’” The effects of early childhood exposure to pornography (footnote viii) include the tendency for “kids to act out sexually against younger, smaller, and more vulnerable children.”

Dunham’s parents made certain she was exposed to images any reasonable person would consider pornographic from a very young age, and that exposure is consistent with the alleged abuse of her younger, more vulnerable sister.

Lesbians and gay men report disproportionately high rates of sexual abuse prompting researchers to come up with explanations for rates that can be four times higher than those reported by heterosexuals. One theory is that lesbians and gay men are targeted for abuse when they reveal their homosexual identities or engage in risky behaviors to pursue same-sex attractions. A second theory is that homosexuals exhibit non-gender-conforming behaviors and are targeted for abuse from a young age for that reason. A third theory is that the coming-out process leads to differential rates of recall and better subsequent reporting. The fourth theory is that abuse increases the likelihood of same-sex orientation. No matter what the explanation, there is no question that the rates of abuse for homosexuals are much, much higher. And Dunham’s sister is openly gay. Again, it’s consistent with an experience of sexual abuse.

6. Are double standards at work?

Let’s go back to Lena’s words. The ones she wrote herself. Now I want you to imagine your favorite, edgy, cool, quirky, maybe a little offbeat male star, or heck, just any man at all. Imagine Chris Hemsworth, Channing Tatum, Josh Hutcherson, or just that cute guy you like at work. Now imagine he has a little brother. Imagine these words coming out of his mouth:

“as he grew, I took to bribing him for his time and affection: one dollar in quarters if I could do his hair like a “motorcycle stud.” Three pieces of candy if I could kiss him on the lips for five seconds. Whatever he wanted to watch on TV if he would just “relax on me”

“I shared a bed with my brother, George, until I was seventeen years old. He was afraid to sleep alone and would begin asking me around 5:00 P.M. every day whether he could sleep with me. I put on a big show of saying no, taking pleasure in watching him beg and sulk, but eventually I always relented. His sticky, muscly little body thrashed beside me every night as I read Jack Kerouac, watched reruns of SNL, sometimes even as I slipped my hand into my underwear to figure some stuff out.”

Is it still OK? How do those words sound coming out of a man’s mouth? Talking about his little brother? Are we giving Dunham a pass on behavior we would roundly, vehemently condemn if a man were doing it? Why do we think women are not capable of abuse, capable of being sociopathic, capable of every bit of cruelty and unkindness and callousness that any man is capable of? Are we not all human?

We are perfectly right to question Lena Dunham and judge the words she herself wrote. Equal culpability, equal responsibility, equal accountability. It’s part of the whole equality package.

And since Dunham is a self-proclaimed feminist, surely she agrees with that?