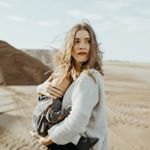 I had to force myself to get my camera out and take pictures of my baby.

I’m a photographer. I see everything in terms of how I would photograph it. Photography comes naturally to me. But the weight of motherhood was heavy. And the thought of taking out my camera was daunting. And honestly, I didn’t feel like I knew the baby in front of me.

I felt like I’d lost myself. Everything in life was now this giant mountain. I had to give myself a pep talk before going into the other room to get my camera. Taking a few photos – which was second nature up until this point – felt like running a marathon.

The only thing that kept me going was knowing that I would be filled with regret later on if I didn’t take photos of my baby in her first few days of life. And one of my biggest flaws is that I habitually live in fear of regret.

Four weeks later I finally accepted that I was deeply struggling with postpartum depression, which I had prayed so strongly against during pregnancy because of my prior history with depression. I took the steps that were right for me to start fighting it. I started feeling better but was fearful of the ramifications of how utterly emotionally absent I was during the first month of Andrie’s life.

Several more weeks passed and suddenly I’d been a mom for three whole months. I had my ups and downs, but overall I was doing better. But I wasn’t aware of how far I’d actually come until I saw this photo.

This was it. This was what I’d wanted. What I’d dreamt about. Looking at this photo, I saw that I loved my baby and that she loved me. That I adored her, and that I was everything to her. That she did not hold that first month – the very hardest month – against me, or any of the time after that as I continued to battle and process. Looking at this photo – it was the moment I realized I was going to survive postpartum depression. And all the moments that came after that when I felt like I was drowning again and doubted if I was enough for Andrie, I would think about this moment and know that I was meeting her needs – even if it was just the bare minimum – and she knew that.

Now, a year later, I’m going through her baby clothes, deciding which ones I want to keep for future babies or for memories, and which ones I’ll throw in the garage sale pile. I come across a striped romper and immediately I’m taken back to a moment of grace. I wonder if I should cling tight to my photo, but pass the romper onto another mama. I toss it in the garage sale pile. A second later, I snatch it back up and realize I want to save it. Not because I need it, but because I want my daughter to have it. Someday when she’s a mom, she’ll have a hard day. Whether that’s because of postpartum depression or just the craziness of motherhood, she’s going to need that moment of grace where she, too, realizes “I can do this.”

Just trying to be on Wheel of Fortune.