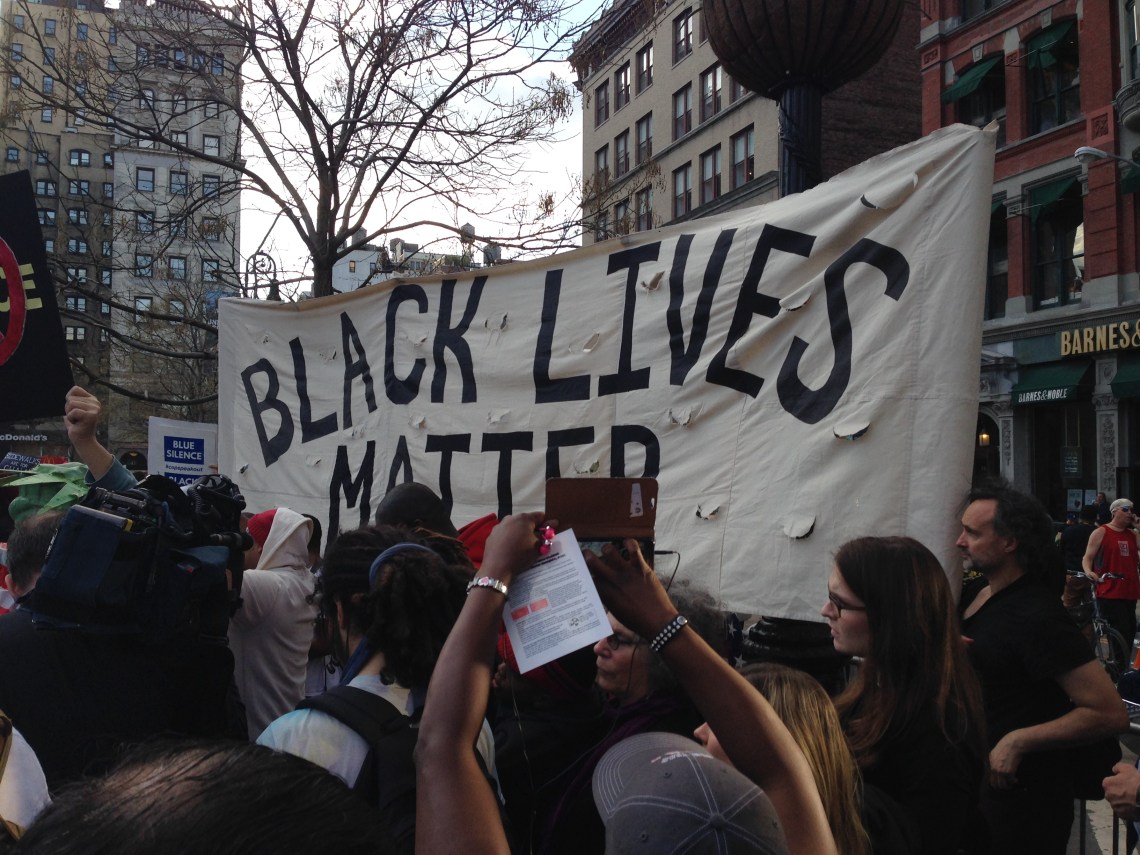 Supporters of the protesters in Baltimore held their own protest supporting today in Union Square under what’s become a national banner for the cause of addressing police violence against the African American community. Despite around a dozen people being arrested as it got later, this was possibly the most polite protest I’d ever seen.

Beginning at around 6pm, there were probably 300 people there when I arrived and so I was able to get close to the speakers, much closer than I’d thought. But the NYPD also had an extremely annoying reminder of what the protesters couldn’t and could do and it played loudly, drowning out the first two speakers and practically drowning out the event. It felt a bit like concern trolling.

I saw a total of four helicopters in the area, both NYPD and local news. Here is one. 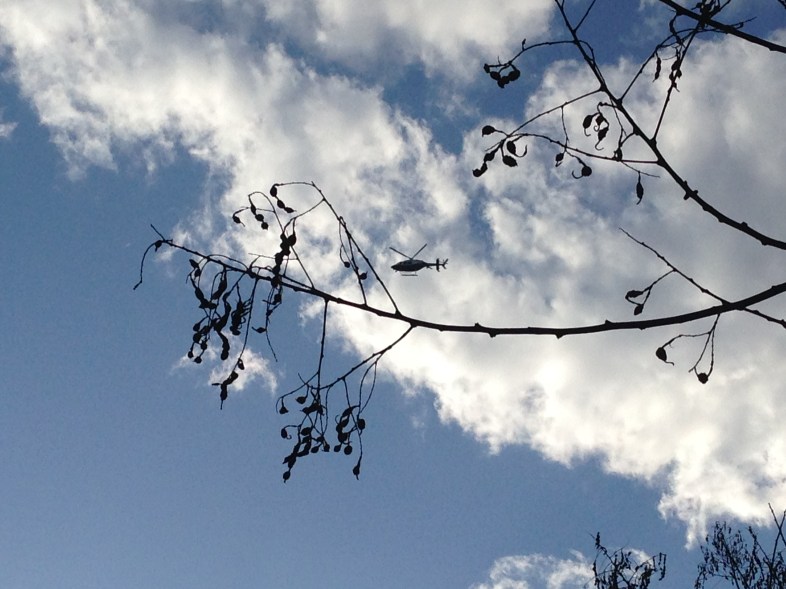 The protesters, as you’d expect in Union Square, were a diverse group.

And one lone Anonymous rep was there waving the green flag. 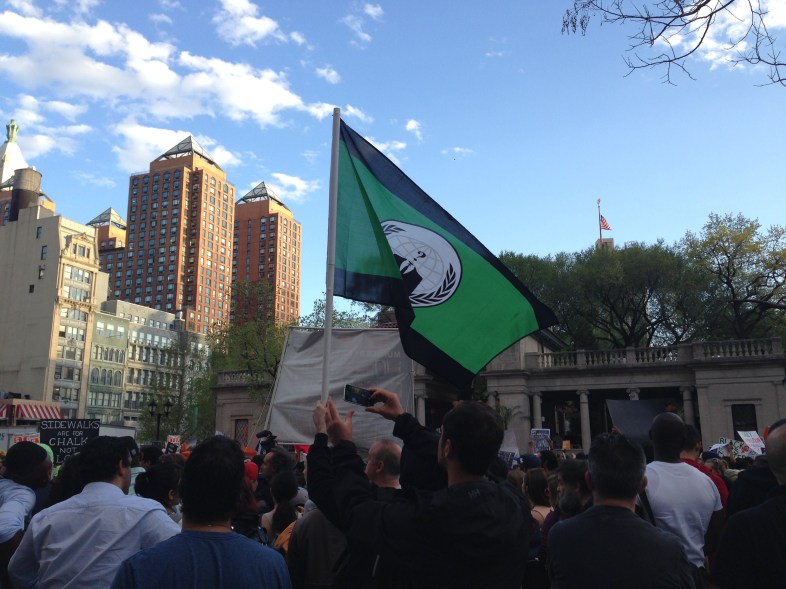 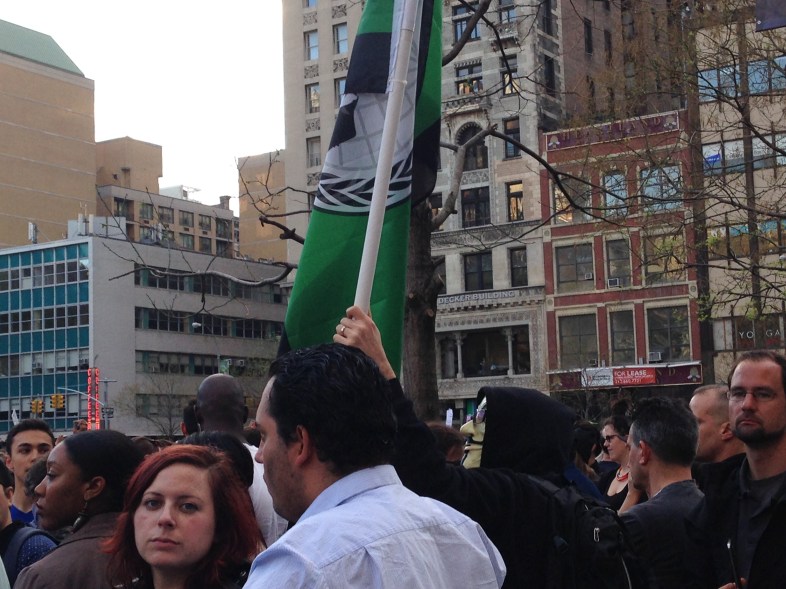 Every issue was represented. 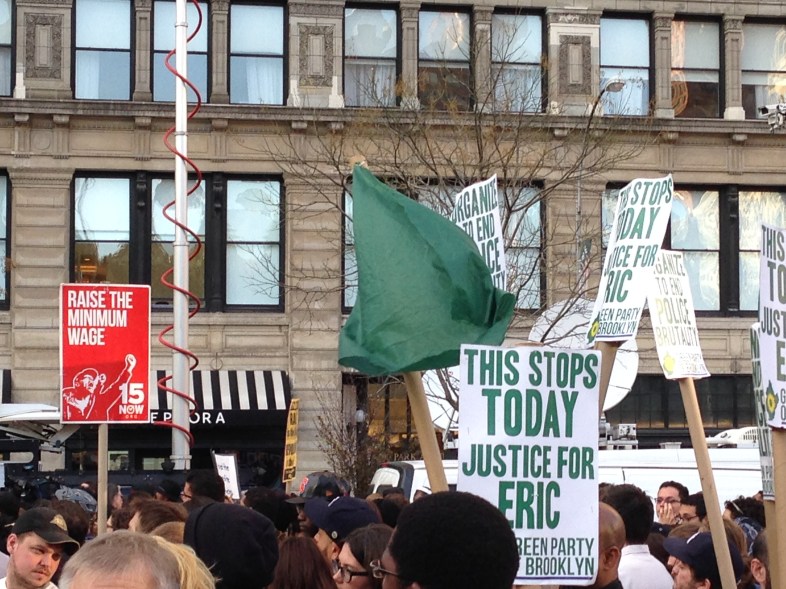 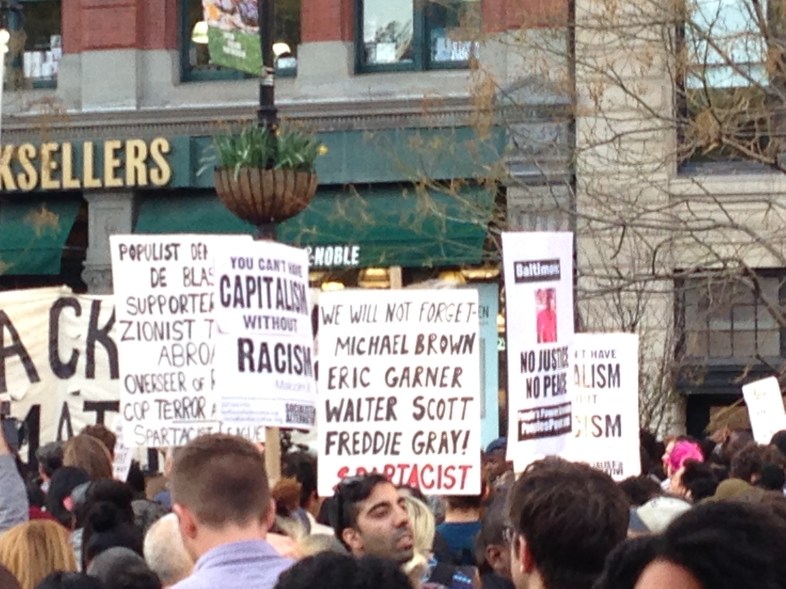 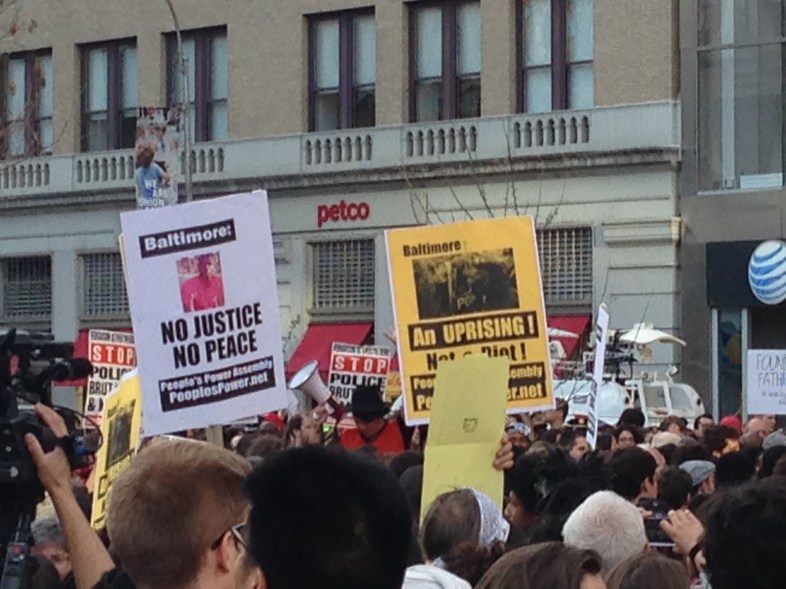 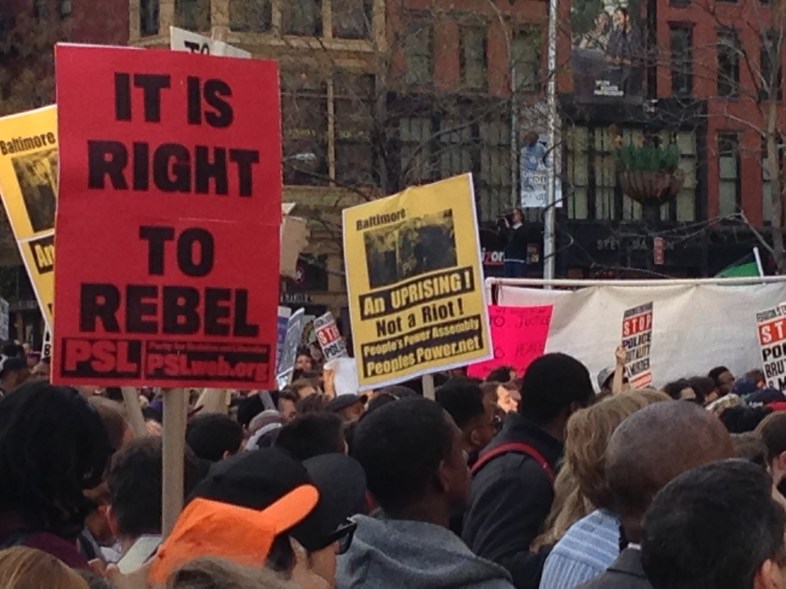 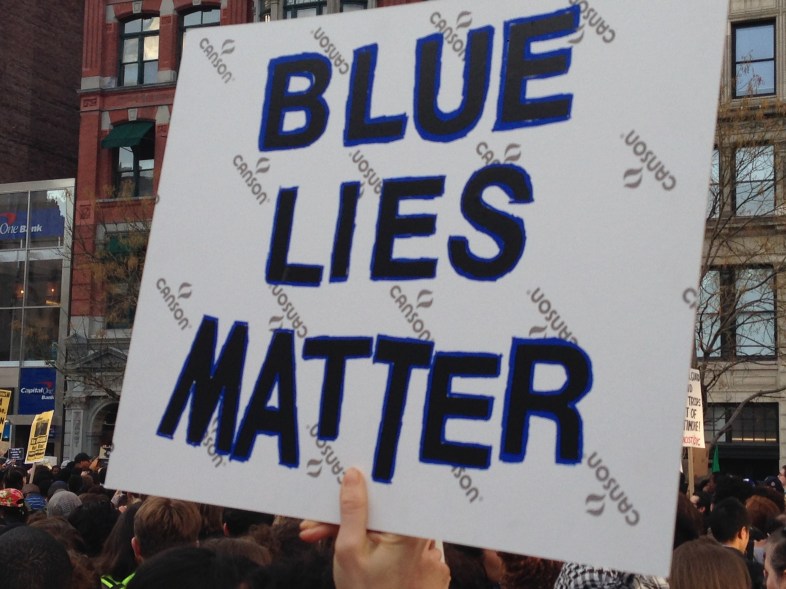 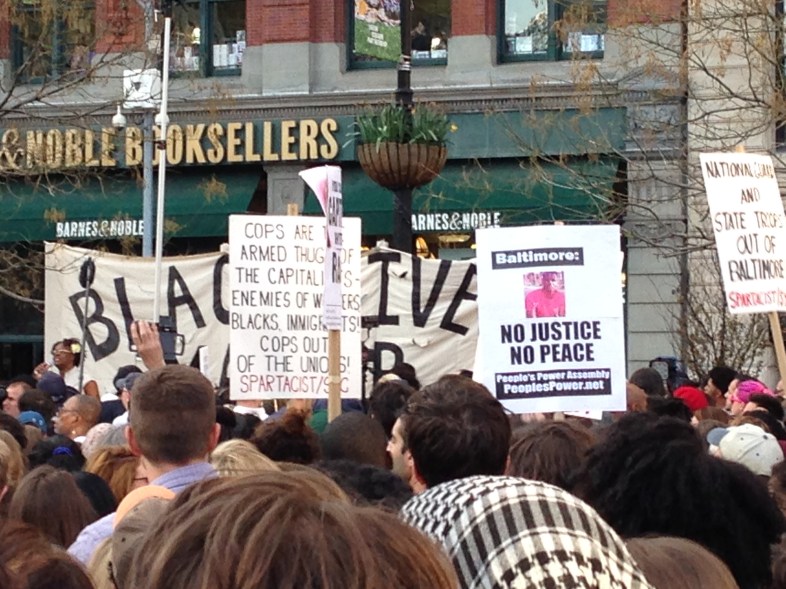 The speakers were focused in clearly on the changes they wanted to see, namely the end of disproportionate violence against minorities at the hands of law enforcement and the beginning of economic opportunity.

And of course the press was there although they didn’t seem to be focusing much (at all, really) on what the speakers were saying so much as they were involved in prepping viewers at home for a potentially violent display. I stood directly next to two separate reporters checking in live with their stations and both used some variation of the theme that ‘things are okay now but they might get crazy later’. 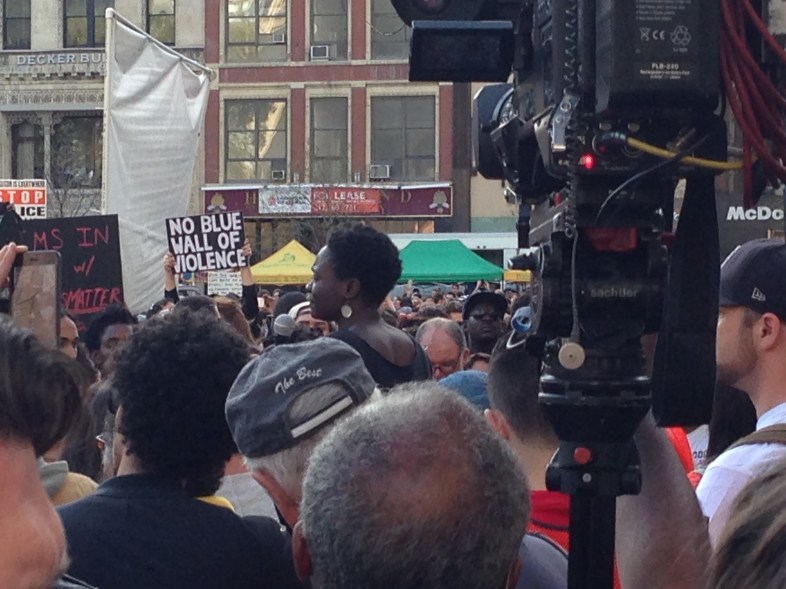 And Michael Koh and I both ended up on video. That’s Michael’s head in the bottom left corner.

But I did feel like I was seeing a bit of how these things get distorted. With the focus on what might happen later it seems difficult if not impossible for any news station to actually relay what the protest is about to viewers at home. It’s not simply about one man in Baltimore who died as a result of police actions. It’s about real economic desperation, a whole culture of desperation especially in cities like Baltimore. That the news reporters I heard were focusing on the potential that the Union Square crowd was going to turn violent and burn the city down seemed absurd to me.

Union Square is not Baltimore. There isn’t the same desperation or culture even if the NYPD has its own inarguable set of excesses. There was clearly opportunity for most of the people at Union Square today in comparison to the absolute destitution we’ve all seen out of Maryland. That the reporters didn’t seem to see this difference or ignored it seemed like a kind of stereotyping all its own.

Away from the main speaking podium there was an almost party-like atmosphere but it became more serious the longer Michael and I were there.

After dark about 60 were arrested, many likely because they were blocking the roads and the side walks as the police loudspeaker had warned against earlier in the evening. Then the protesters moved outward from Union Square.

UPDATE: Holland Tunnel shut down outbound as dozens of protesters converge at the entrance- http://t.co/nP7WomcA1h pic.twitter.com/AK0XqlrDcA

UPDATE: Over 60 people have been arrested tonight in the Manhattan protests over Freddie Gray death: http://t.co/QJbpq5sM3H

There was a die in.

And hundreds marched through Times Square.

As of nearly 11pm, there’s still some marching taking place in Manhattan but no violence like reporters had been hinting at earlier in the evening. Nothing like that at all.

It would be nice if the news had been reporting the specific complaints being communicated by the protest leaders that I saw speak They could have asked to take them aside briefly for a real interview. It would have been nice to see that kind of real journalism instead of coverage that felt more like ‘here’s these people we’re all tolerating tonight’ race baiting.

Admit It, You Have No Idea What’s Going On In Ukraine Right Now

On The Ground In Ferguson: Is The Movement Working?

May The Earth Not Catch Fire Below Me: A Prayer For Boston