Nungesser became well known after Emma Sulkowicz accused him of rape in 2013. Afterwards, she was allowed to carry a mattress with her to class and on campus as a protest against sexual assault and as her senior thesis called “Carry That Weight.” Nungesser has consistently denied the allegations. Below, I’ll provide a basic summary of my readthrough of the legal document.

Nungesser claims that Sulkowicz and others have harassed him since the alleged incident and that Columbia University and its faculty not only did not protect him from it but also engaged in it.

The Lawsuit Frames Sulkowicz As A Jilted Lover

The lawsuit also includes numerous Facebook conversations that don’t appear to have been previously released by publications such as the Daily Beast and Jezebel. These conversations are, unsurprisingly, if you’ve followed this story, sexual in nature.

Details of Sulkwicz’s relationship with an ex-boyfriend (John Doe) and friend of Nungesser’s are also on full display.

Overall, the lawsuit seeks to frame Sulkowicz as a jilted lover rather than a victim of assault. What’s more, it claims that despite being found “not reponsible” for non-consensual sexual intercourse in 2013, Nungesser was not treated fairly by Columbia who allowed Sulkowicz to bring in outside evidence that supported her assault claim while denying Nungesser the same right.

Nungesser accuses the University of supporting Sulkowicz and allowing his confidentiality to be breached and identity to be known, without penalty, despite the University’s “not responsible” ruling.

Columbia Faculty Directly Supported The Claim That He Was A Rapist

He claims that Columbia professor Professor Jon Kessler encouraged Sulkowicz to turn her alleged experience into a performance art and in doing so jointly designed her senior thesis mattress project. Nungesser alleges that this is evidence of University faculty directly seeking to harass him since the mission of the thesis was as follows:

“I will carry the mattress with me to all of my classes, every campus building, for as long as my rapist stays on the same campus with me.”

He claims that the notoriety around the mattress project has directly resulted in him being defamed and harassed on an international level and has made finding a career after college difficult. The lawsuit also names University President Bollinger as a contributor to the harassment. 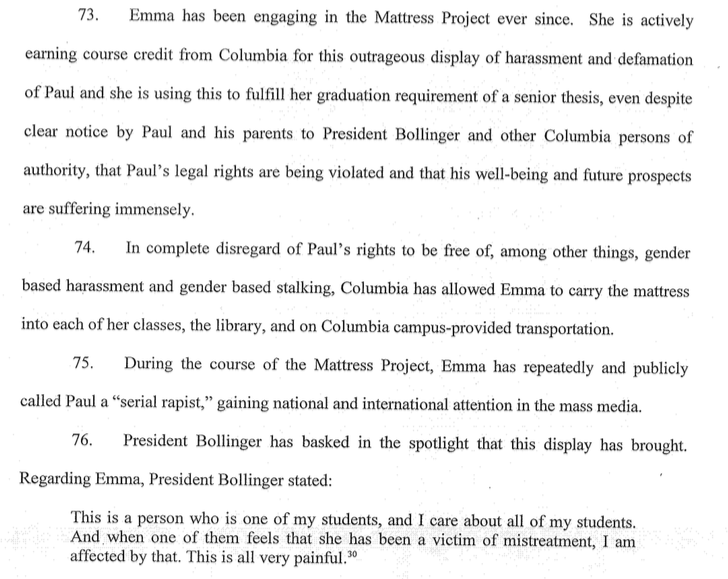 The University’s website also highlighted Sulkowicz’s mattress project on one of their website’s calling her a survivor and making an affirmative statement that Nungesser was a rapist.

There’s a lot more accusations including that Columbia paid for protests against Nungesser and that the University has repeatedly broken its own gender-based misconduct policies and changed some policies to support Sulkowicz.

The lawsuit is pretty expansive and will have national repercussions. You can believe that.

Huh? Innocent Student Kicked Out Of School For Looking Like Someone’s Rapist

Take Back Your Campus: What You Need To Know About The University Sexual Assault Epidemic