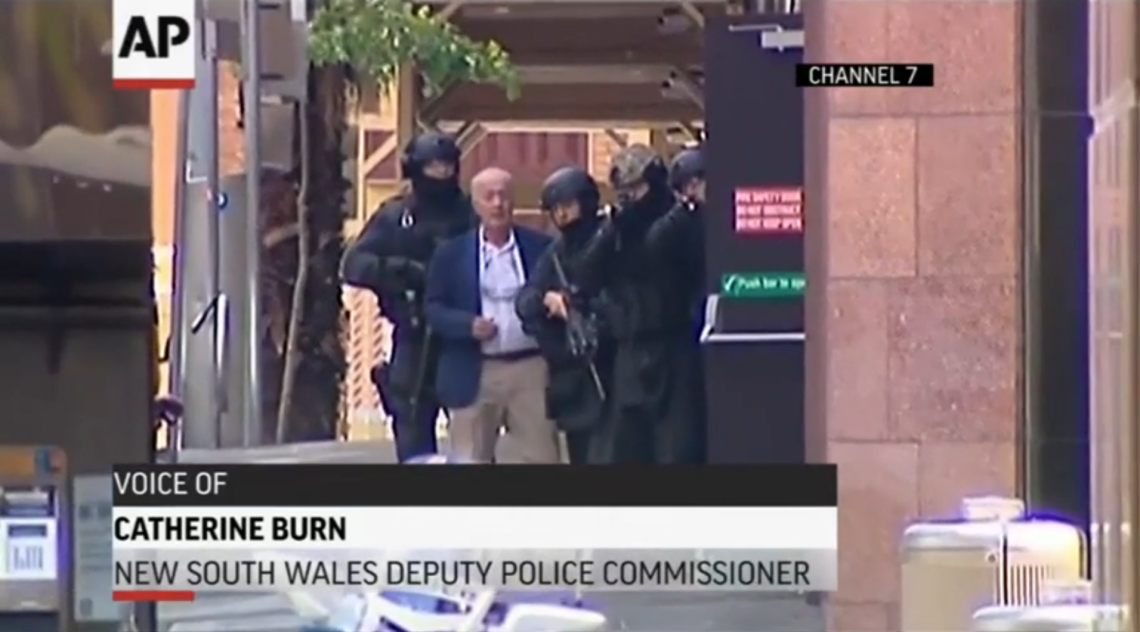 Ending a 16-hour standoff, authorities in Sydney, Australia used flash bangs and raided a cafe where hostages were being held at gunpoint by an Iranian refugee and self proclaimed spiritual leader, Han Haron Monis. Monis had forced hostages to display a flag commonly associated with the Islamic State in the cafe’s window. He has a history of terrible behavior, according to the Washington Post:

Monis, a self-styled Islamic cleric and “spiritual healer,” was convicted in 2012 of sending threatening and offensive letters to the families of eight Australian military members killed in Afghanistan…

Two hostages were killed in the raid as was the hostage taker.

NOTE: This piece previously stated that no one was killed which was what was being reported at the time.

Uber fares peaked at four times the usual rate in the centre of Sydney today, as the city’s CBD faces a lockdown amidst a developing hostage situation.

This, of course, seemed to be in terrible taste, at the least. Uber has since responded with surge pricing refunds and free rides out of the city center.

Claiming his attempts at organizing protests are “corporate,” many people involved in the Ferguson protests in DC are turning on Al Sharpton for cutting out local organizers from protest events. Via Mashable:

Young people had led the protest marches from the beginning, Elzie later argued, so they should be given a voice. But when Elzie — known as @nettaaaaaaaa on Twitter — finally began talking, march organizers cut the mic.

Nothing says “I really care” like “shut up, we’re cutting your mic.”

So yes, I now have a problem with Sharpton. To attempt to erase Ferguson while simultaneously exploiting it epitomizes spiritual corruption.

4. Sony: “Please Stop Showing What We Do and How We Are”

Since the Guardians of Peace, maybe of North Korean origin, hacked Sony and released a veritable library of tomes worth of internal correspondence and emails, Sony has been embarrassed over and over again.

Well now they’re taking a stand…by asking the press to quit talking about it. Via CBC:

The New York Times, The Hollywood Reporter and Variety published stories reporting that they had each received a letter from David Boies, an attorney for Sony, demanding that the outlets stop reporting information contained in the documents and immediately destroy them.

The studio “does not consent to your possession, review, copying, dissemination, publication, uploading, downloading or making any use” of the information, Boies wrote in the letter, according to the New York Times report.

I feel this will not happen.

5. For Cops, Ignorance of the Law Is Completely an Excuse

A police officer can stop a car based on a mistaken understanding of the law without violating the Fourth Amendment, the Supreme Court ruled on Monday in an 8-to-1 decision.

The case arose from a traffic stop in North Carolina based on a broken brake light. But state law there required only a single working “stop lamp,” which the car in question had.

That a police officer wouldn’t understand the very laws they are intended to enforce was found to be reasonable by the Supreme Court. I’m guessing you and I won’t be able to make the same excuse though. The subsequent search that ensued will now be allowed to stand as Constitutional.