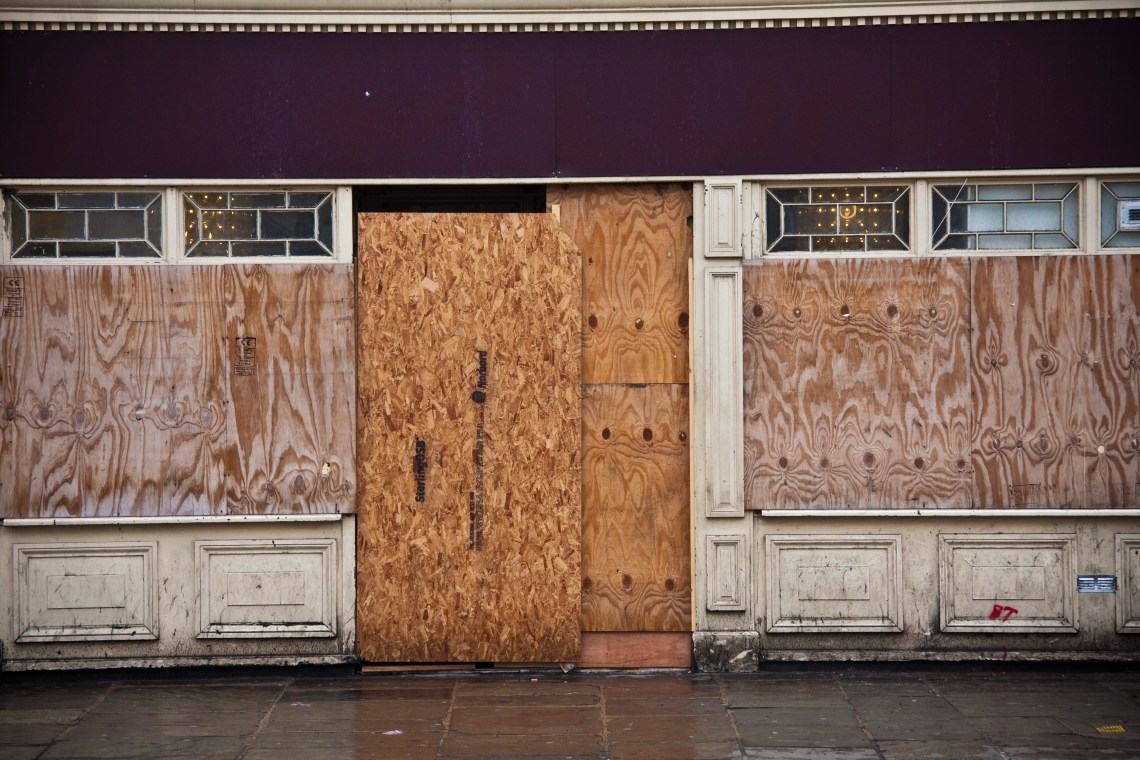 Writer for Quartz.com, Sarah Kendzior, has an interesting article up from yesterday entitled “The Real Reason Ferguson Is Boarding Up Its Storefronts” wherein she interprets the fear of riots among Ferguson, Missouri’s small business owners as a condemnation of lack of economic opportunity for Black Americans.

The piece focuses on, as the title says, the many boarded up buildings and businesses in the Ferguson area and rightly points out that, in areas of economic depression, buildings don’t get taken care of once they’re vacated. Eventually, the windows of these abandoned properties get boarded up to prevent squatters and others from living in the property out of fear that they’ll be burned down. She compares these abandoned buildings with the current phenomenon of Ferguson business owners boarding up their windows to defend them against looters should officer Darren Wilson not be charged for unlawfully shooting the deceased Mike Brown.

Kendzior addresses the crushing poverty that can arise, and has arisen, out of formerly squarely working class neighborhoods once jobs leave the area and small businesses dry up. She also well knows that poverty in metropolitan areas undoubtedly affect Black Americans more than any other population. These are things she does seem to understand and understand well.

However, the piece also gets a lot of things wrong because Kendzior seems to not understand that Ferguson and St. Louis generally aren’t any worse off economically than a ton of other places in the U.S. (indeed they’re better off than many), and, ultimately, I believe this hurts the article greatly. Here’s the paragraph that begins that tailspin:

Kendzior is based in St. Louis and all the photos she presents in her article were presumably taken by her. They reflect an economic region that has simultaneously seen better days and is preparing for an assault. But these two things did not happen at the same time and no one has really interpreted the boarding of Ferguson as racist save perhaps a very few who apparently don’t believe that Black Americans actually own any businesses or work anywhere.

Additionally, she makes the highly dubious assertion that economic depression, not the looting and destruction of local businesses in August of this year, have destroyed Ferguson. However, since the economic depression happened long before Mike Brown was killed, a reader would have to assume she believes Ferguson was already destroyed which I think is nonsense. Here’s the final paragraph of the piece where she pulls it all together.

Nothing is safe in St. Louis. But the culprit is not protest—it is the lack of investment in and support for black communities, a pattern that has replicated itself in the region for decades. Protests did not destroy Ferguson. Destruction—social, economic, and political—created the protests. In St. Louis, one can drive from neighborhoods boarded up out of fear to neighborhoods boarded up due to abandonment. Unless systemic racism and economic discrimination are addressed, Ferguson may transition from the former to the latter.

No, social, economic, and political destruction did not create the protests. Mike Brown’s shooting created the protests. If the protesters don’t know that (and I think they do) then the protests are hopelessly lost and while Ferguson has become a sort of national flash point for poor Black neighborhoods under the banner of economic injustice, it’s really not a great vector for this kind of thing.

Kendzior tries to make the case for a sort of exceptional and unique poverty level in Ferguson by comparing life expectancies in Ferguson and Iraq. This doesn’t work but let’s take a look at her argument first.

In majority black North St. Louis, where life expectancy is similar to that of Iraq, entire streets are emptied of inhabitants who fled its crumbling infrastructure—many to northern suburbs like Ferguson.

Here are those numbers, emphasis mine:

Fine, but residents in Ferguson, and even residents in poorer North St. Louis, are doing a hell of a lot better than the people I grew up with in Southeast Kentucky. A child born in Egypt, Iran, Iraq, or North St. Louis will live longer on average than a child born in the ever poorer mountains of Southeast Kentucky. Here are the life expectancy numbers there by county:

So that’s eight counties, mostly White, that are all worse off than North St. Louis and, certainly, Ferguson. I mention this because, unfortunately, Kendzior seems to think that life expectancy means something in the case of St. Louis but doesn’t mean anything for other parts of the country. Either that or she isn’t aware of the information. I hope it’s the latter because exclusively racializing the life expectancy of the poor without contextualizing it (which is what she’s trying to do in her article) is divisive and unhelpful to poor Blacks and Whites alike and they are very much alike, far more so than they are different.

Kendzior also seems to not understand business very well and this is unfortunate because a better understanding would have only helped her article:

The reality is that the violence and looting that took place in Ferguson was limited to a small strip in the commercial district of West Florissant Avenue, with one business, QuikTrip, burned to the ground. The few stores that were looted reopened shortly afterward.

Oh, just a few and they reopened shortly afterward…no harm, no foul then? If I was there, I’d board up my windows too. So would you. So would anyone. This isn’t about economic opportunity. It’s about protesting a death that the population believes was unjust.

The situation in Ferguson has grown exponentially since August and if there is any rioting there in the days to come I, were I a business owner, wouldn’t trust to luck that my business, my livelihood, my contribution to the community would be passed over and spared like the Jewish first born of ancient Egypt. This is silliness. You can’t simultaneously make rightful assertions about economic need and then hand wave when a community’s economic engines are assaulted.

The boarded up windows of an economically depressed city is a common site in medium to small cities all over the country. The main street of my own home town kept lumber yards in business making particle board for better than a decade beginning in the 90s and ending today with a nearly empty downtown, a nearly empty indoor mall, and a bustling Walmart. This is a common trajectory all over the country and is in no way peculiar to Ferguson or North St. Louis.

By framing the “boarding up of Ferguson” as a long standing economic problem, Kendzior is missing the larger trend of which Ferguson, North St. Louis, and Southeast Kentucky are all a part, the shrinking middle class and the impoverished working class, and isn’t giving common sense credit to Ferguson’s business owners. They’re operating out of an abundance of caution because of their economic vulnerability and that fear is worthy of protection, not dismissal.

Live: Your Guide To Keeping Track Of What’s Happening In Ferguson Tonight

Ongoing Unrest, Missouri’s Governor Has Called The National Guard In To Ferguson