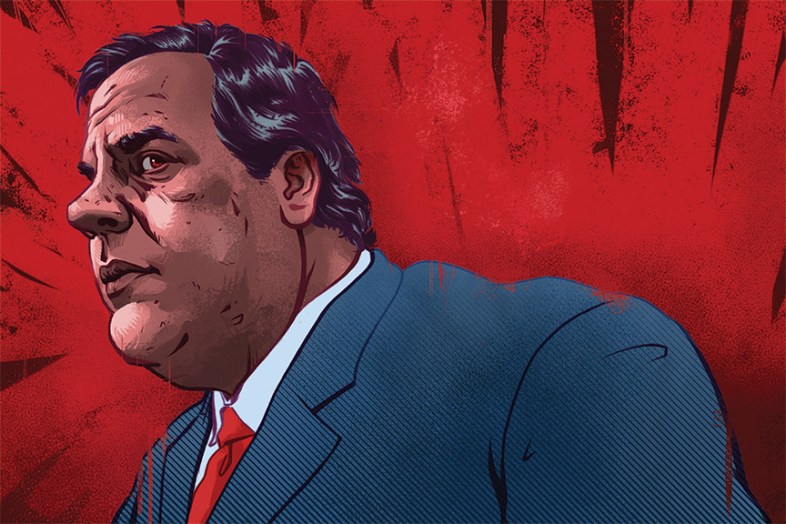 It was the first thing I heard this morning, a discussion on the radio about why a Maine woman, Kaci Hickox, who’d been a volunteer in Sierre Leon, West Africa fighting Ebola, was now being quarantined for 21 days in a tent in New Jersey with only a Port-a-potty, a bed, and three squares a day even though she showed no symptoms of Ebola infection. Every expert calmly explained why Governor Chris Christie’s insistence on quarantine of the woman was unscientific. They all said he was overreacting and that she could remain under observation while she was home in Maine.

Throughout the day, the media echoed this mantra of “no symptoms means she can’t give anyone Ebola” and we learned that Hickox was starting to consider legal recourse to get out of the quarantine she viewed as a kneejerk reaction on the part of New Jersey. All below quotes are from the same NJ.com story:

“This is an extreme that is really unacceptable, and I feel like my basic human rights have been violated,” Hickox said.

Hyman said there’s a “legal basis” to challenge the quarantine policies in New Jersey and in New York, but the nurse isn’t sure she wants to do so.

Each state has a different quarantine law, said Steven Gravely, an attorney who helped rewrite Virginia’s quarantine law so the state could more easily respond to outbreaks.

The U.S. Constitution gives states authority over how to approach health matters, though the federal government has control over what happens concerning public health in airports and shipping ports, Gravely said.

So she’s probably wrong. She probably had no legal recourse anyway but after pressure from the media and the public, Christie relented. Hickox is now back home in Maine and will wait there to see if she develops any symptoms of the dreaded disease.

But despite the entire scientific community seeming to sing with one voice here, there’s one man who thinks Christie’s quarantine policy is not only scientific but just generally a good idea. His name is Dr. Bruce Beutler and in 2011 he won the Nobel Prize for Medicine and Physiology “for his work researching the cellular subsystem of the body’s overall immune system — the part of it that defends the body from infection by other organisms, like Ebola.”

Dr. Bruce Beutler is a specialist in Immunology and Genetics and a leader in his field. Here’s what he had to say about the self assuredness (he calls it dogma) with which everyone seemed to be facing Hickox’s case.

In an exclusive interview with NJ Advance Media, Beutler reviewed Christie’s new policy of mandatory quarantine for all health care workers exposed to Ebola, and declared: “I favor it.”

“I favor it, because it’s not entirely clear that they can’t transmit the disease.”

“It may not be absolutely true that those without symptoms can’t transmit the disease, because we don’t have the numbers to back that up. It could be people develop significant viremia [where viruses enter the bloodstream and gain access to the rest of the body], and become able to transmit the disease before they have a fever, even. People may have said that without symptoms you can’t transmit Ebola. I’m not sure about that being 100 percent true. There’s a lot of variation with viruses.”

“There’s some imperative to prevent panic among the public but to be honest, people have not examined that with transmissibility in mind. I don’t completely trust people who’d say that as dogma.”

“Even if someone is asymptomatic you cannot rely on people to report themselves if they get a fever…You can’t just depend on the goodwill of people to confine the disease like that – even healthcare workers. They behave very irresponsibly.”

Despite her forced detainment by the New Jersey health department, Hickox insisted hat she was “feeling physically healthy” and except for a single, non-contact thermometer reading that registered her as having a 101 Fahrenheit fever, has had normal 98.6 F temperatures ever since her quarantine began.

Beutler is totally unconvinced by this evidence.

“These are no arguments at all. Anyone could say that about any disease. It doesn’t matter that she was afebrile – she should be quarantined for 21 days.”

“These people act like they are returning as conquering heroes — and they should be treated as conquering heroes, but part of being a conquering hero means making sure no one gets infected by you. Just look at the the foolish quarantine where astronauts came back from the moon [where there were no germs] and in this case, we know there is an infection.”

Governor Christie has now relented and the standing quarantine practice will be in-home quarantine. Beutner disagrees with this.

“I’d be a little bit more strict than he is being. I realize this would be inconvenient…”

“The point of quarantine of is to make sure they [Ebola viruses] are not carried elsewhere. It’s a little bit frustrating. Some of the things that are being done are not completely motivated by safety. For some reason, there’s an imperative to maintain open borders no matter what – to err on the side of total individual freedom rather than on the side of public health. If you really want to isolate a disease, then you have to isolate the people who carry it.”

What I find just as interesting amid all this war of the talking heads stuff going on in the media is that, while the Obama administration has implied Christie’s quarantine stipulations are extreme, Obama himself appointed Ron Klain, a man with zero scientific knowledge or credentials to be the Ebola Czar (Ebola Response Coordinator). Klain was Vice President Joe Biden’s Chief of Staff. He doesn’t know a thing about Ebola, likely knows less than even I do. Klain is the Michael D. Brown of Ebola. Whereas Brown had no experience that could prepare him for Hurricane Katrina, Klain has no experience to handle Ebola.

“Brownie” was not doing a heck of a job. He was doing a terrible job because he had no idea how to do that job. This resonates with much of what Beutner says.

“Some of the things that are being done are not completely motivated by safety. For some reason, there’s an imperative to maintain open borders no matter what – to err on the side of total individual freedom rather than on the side of public health.”

The media blitz, the pushback against NJ and NY wanting to go beyond CDC guidelines, it feels political. It feels like a public perception campaign. It is the mid-terms, you know, and the Democrats want all to be right in the homeland, as any Party in their position would.

Don’t take that as an indictment of the Party but keep it in mind when you hear an absolute expert’s voice being drown out on TV and the radio by people with fewer credentials and far more self assuredness.