“I reject the narrative that the current state of affairs is simply the result of the actions of isolated rogue traders or a few bad actors within these firms. The problems originate from the culture of the firms, and this culture is largely shaped by the firms’ leadership.” 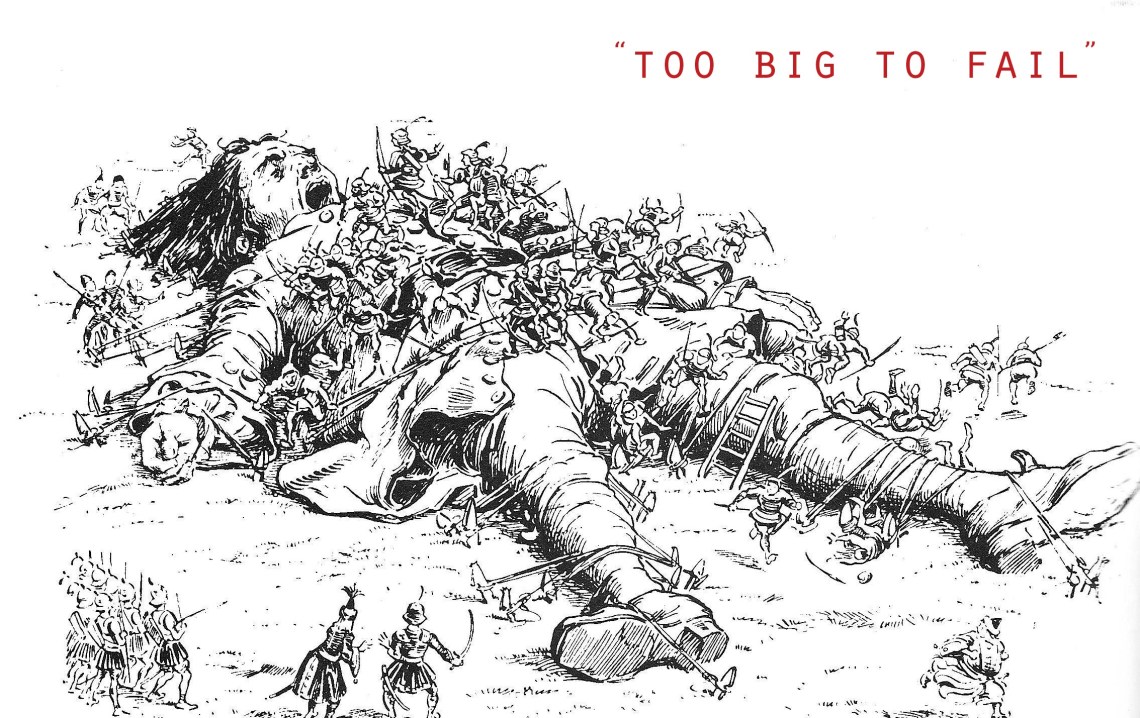 Since the gross mismanagement of the economy nearly destroyed it in 2008 we’ve seen dozens of banks and financial institutions disappear only to have their assets and accounts reappear in the coffers of other, stronger financial institutions. As of today there’s about half the number of banks and financial institutions that there were in 1990, roughly 8,500, down from 12,000 (citation here). While some people agree with the one-stop shop model ala Walmart, general theories about efficient capitalism don’t. Competition is the most important aspect of capitalism and without that aspect the system collapses into monopoly and, you’ll probably remember this term, create “too big to fail” scenarios where markets distort and then collapse and destroy your life savings and your job.

One important man appears to have noticed that’s the case and he’s speaking out. From CNN Money:

The Fed official overseeing Wall Street (William Dudley) says things need to change, and if the industry’s risky culture isn’t turned around, it may be time to break up the big banks.

If “bad behavior” continues, the banks would “need to be dramatically downsized and simplified,” he warned them. Dudley cited “ongoing occurrences of serious professional misbehavior, ethical lapses and compliance failures” that have led to over $100 billion in fines since 2008.

You may know what he’s talking about and you may not. Assuming you don’t, he’s referring to liberties taken by the current living and large banks who took advantage of their status as survivors of the 2008 crash and continued investing in risky portfolios and investment tactics that don’t serve the consumer or, ultimately, the stability of the U.S.

Remember, it’s “get rich quick” planning on the part of the banks that caused the crash in 2008 and made it necessary for the U.S. taxpayer to bail out the entire system. As it is, Dudley is really only echoing what others have been saying for years, that banks are too big and capital is too concentrated and that this is dangerous for the economy. What’s more, it’s universally agreed across the ideological spectrum that this is the case. Even people who go to American Enterprise Institute seminars agree on it. From last year:

The speakers and those who participated in the question-and-answer session that followed disagreed on a number of issues. But as the Daily Caller reported the next day, “While the mix of conservative and liberal speakers differed sharply on how to restore the country’s rigid financial industry, all agreed on one point: The 2010 law—commonly known as ‘Dodd-Frank’…has utterly failed in its purpose of reducing the systematic risk posed by enormous financial institutions.”

To continue, and this is the Real Talk:

It was comparatively easy to close Merrill Lynch on Friday and reopen it as Bank of America Merrill Lynch on Monday. But if Citibank goes bust, exactly who do you think is going to take it over? And how long will it take? What is equally obvious—if Citibank is in that kind of trouble, what are the odds of Bank of America and Chase not being affected?

What he’s saying is that back in 2008 it only seemed like banks were too big to fail. Now they are truly too big to fail. If one fails then they’ll all fail and no one will be able to absorb their losses.

So What Exactly Is The Solution?

Well, the clearest if not most logistically simple solution is to break the banks up into smaller institutions. Then if a few go bust it just won’t matter as much to the larger system. Think of it in terms of balloons. Remember in “Up” when there was an entire legion of balloons holding up the house. Remember when just a few of the balloons on the house got popped? The house still floated, right? Right. Now, imagine if it had just been a very few balloons to begin with. One pop could have meant catastrophe. This is an apt analogy, seriously. It’s simple diversification.

But what is William Dudley of the Fed suggesting?

Well, right now he’s suggesting behavior changing incentives so that the banks won’t have to be broken up. Here’s his ideas, and I’m quoting here.

These are good starting proposals. Certainly, banks need to get back to their core work of wise investment over the long haul rather than behaving like vultures feeding on the remaining wealth of the Middle Class. But why can’t we break the banks up into smaller banks AND institute these changes. Why? Because rich people don’t want that? Oh yeah, that’s it.